Hexagons, Part 1 - Getting started and working through ideas

I wanted to make a hexagon. Why? Well, I play board games and often times they are on hex maps. What is a hex map? It's like graph paper but instead of squares there are hexes. Always trying to find ways to merge my hobbies I thought it would be cool to be able to make hex map themed items. I pondered for awhile and came up with a number of ideas:


Next I started thinking of how I'd make the hexes.

I was thinking I could build a template and use my router and a pattern following bit to create a groove I could later fill with a contrasting wood inlay.

It'd have to be a short piece because I'd want to be able to make small boards (1' x 1') and larger boards (4' x 8 '). A 4 foot wide template would be difficult to use on a small board. It would be easier to create a 1 foot long template that I could use on a section, move it and then route another.

It seemed like a good idea until I tried to figure out how to create the template. The accuracy needed is well past what I could do by hand. I thought about hiring someone with a laser cutter to do it for me so I started putting some thought into what it would look like. I'm still thinking through this process but I wondered if there might be an easier way.

A lot of cool things can be done with veneer. I could cut out little hexagonal shapes from paper backed veneer, tape them together and then glue them down to a substrate. On the downside, I've never done veneering. On the upside it would give me an excuse to buy a vacuum bag.

Then I thought about having to cut out thousands of little pieces of veneer to a relatively precise shape. That doesn't sound like a good idea for a first veneering project.

Then I started thinking of how I could use jigs and my power tools to cut the veneer more precisely and in bulk.

I didn't think of a good way to cut veneer on the table saw but sitting at work in a boring meeting I came up with a way I could make a hexagonal column. I could then cut pieces off of the column and fit them together. This form of woodworking is called parquetry.

I've run a couple of sample columns and it seems to work relatively well and consistently. There are a bunch of pluses to this approach. Since it ends up showing end grain so it'll be like a butcher block and I can worry less about face grain and grain direction. I can make my final work piece any thickness I want within reason. I can make hexes up to a couple of inches high out of a single board and if I want bigger I can laminate my blanks.

Posted by Felix Enterprises at 10:04 AM

Email ThisBlogThis!Share to TwitterShare to FacebookShare to Pinterest
Labels: Hexagons


I spent a few hours with my random orbit sander on the fronts, and sides. I learned a bit about my new drum sander in the progress. It is set up with 80 grit sandpaper. It does a pretty good job but the consistency isn't great. There must be a couple of large grains somewhere on the roll because the end result isn't perfectly smooth and the pieces have a couple of deep grooves.

I should probably have replaced the 80 grit with a 120 grit but instead I just gave each piece a little extra loving attention with my random orbit sander with 80 grit and everything worked out fine.

Next I used the template to draw the feet on the front and back and rough cut them on the band saw. The next step was to clean up the cuts by using the template and a flush trim bit in my router table. It worked out okay excepting a few pieces where I should have back routed to avoid tear out. A little sandpaper cleaned up most of that. 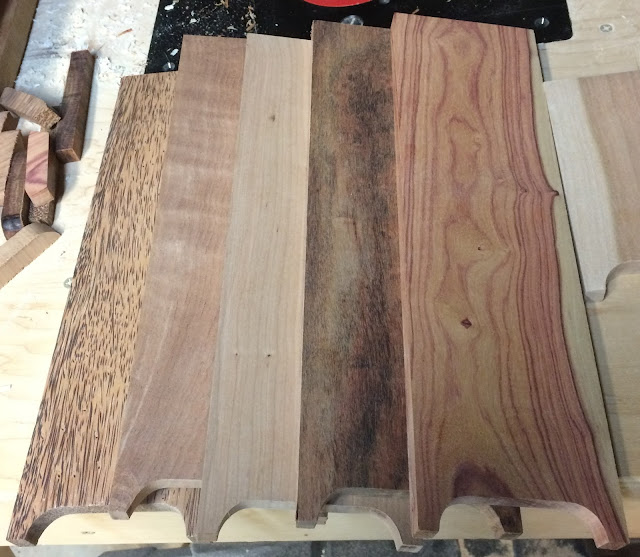 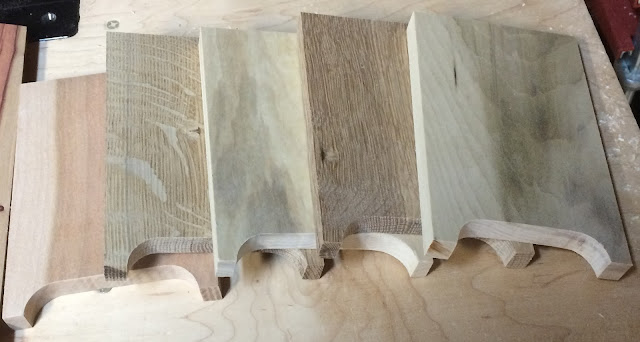 The next steps are to mount a dado blade in the table saw and cut the grooves and dados in the fronts and sides and the rabbets on the bottoms. Then it's just a matter of gluing up all the pieces and finishing.

I've got a long weekend coming up so hopefully I can get to at least the finishing stage.
Posted by Felix Enterprises at 6:24 PM

It's spring here in upstate New York. We actually had a pretty mild winter this year but it is still much nicer out than it has been for the last six months. We've got clear skies. There's this giant yellow orb in the sky that is kind of bright that disappears for months at a time.

Anyhow, I've not had a lot of time for woodworking this last month. I did get a couple of drawer fronts mounted on my dresser but I'm going to hold off until they are all on before updating that project. But otherwise it has been being busy at work and yard work that has been keeping me busy.

Also, we got these Wednesday last: 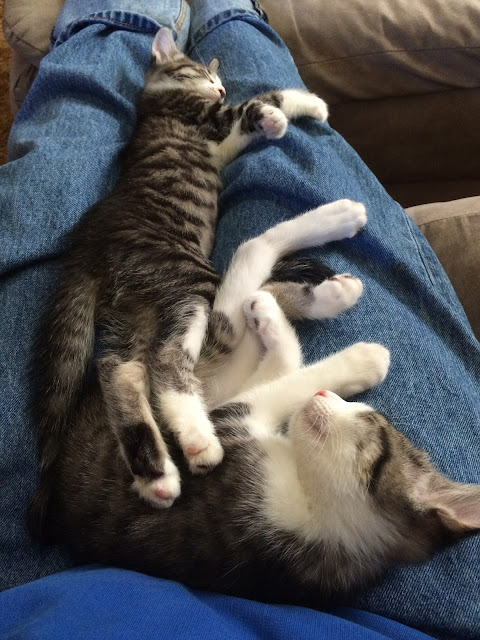 We adopted these two cuties along with their mom. That's Heimdall on top, Idris her sister is on the bottom.

Last fall we lost our puppy Linnea Destroyer of Worlds. She was ten years old but still my puppy. This spring we lost Ginger our cat who was twenty. We'd had Linny since she was ten weeks old and Ginger since she was around four. 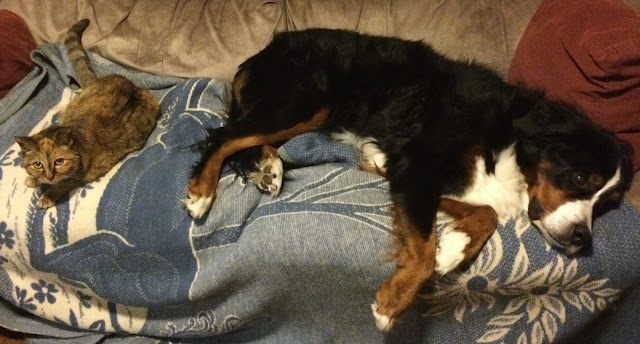 It's taken a few months but we were missing having some animal companions in the house. The new kittens have settled in and are having a romping good time. Their mom Luther, has been having a bit harder time adjusting but she's calming down.

So... play with kittens or go do woodworking...  it's a tough choice.

Posted by Felix Enterprises at 2:41 PM