It's winter in upstate NY... Okay, technically it is still fall; however, we had over a foot of snow last week and I had to clear the driveway. That makes it winter in my book. Regardless, whether the season is fall or winter, it is definitely woodworking season again.

I've cleaned up the detritus of summer projects which involves putting tools away that were just set down rather than stored, throwing out scraps and cleaning up piles of sawdust. I've also done a couple of quick projects to get back into the swing of things.

Cat Scratching Post:
Our cat post had seen better days so I decided to strip the frayed carpet off and recover it with sisal rope. One thing I realized is that it is easier to have two people doing it so I enlisted my wife's help. The issue was that as I twisted the rope around the post it was torquing the rope and making the brain tighter until it kinked. This was solved by having my wife rotate the post while I kept the rope tight. I fastened the two ends of the rope to the post with staples intended for holding romex down.

I left the square of carpet on top because I didn't have a good idea how to wrap the sisal around the top and that carpet was still in good shape. 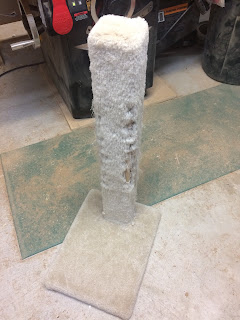 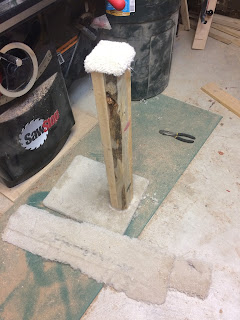 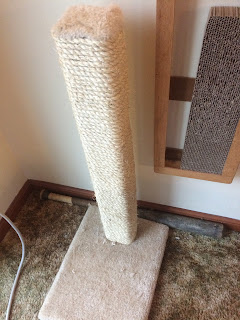 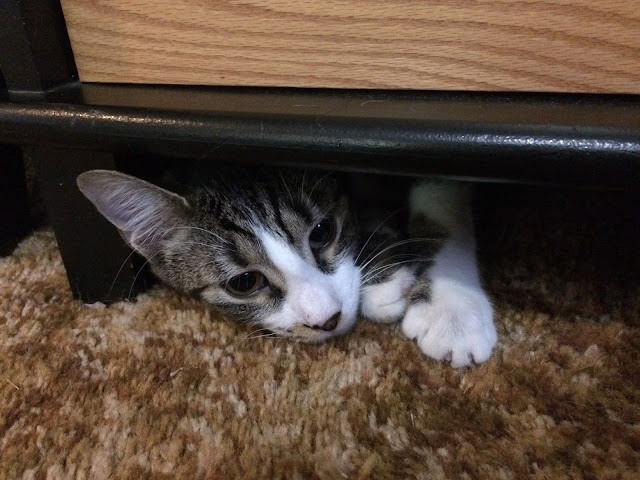 Wooden Wallet
A friend of mine asked me to make him a wooden wallet. I'm skeptical as to the utility in a wooden wallet; however, I figured I could throw one together. He asked for Padauk and Wenge. I happened to have to some small pieces lying around so I got it started this weekend.

I took a small strip of Wenge and cut two lengths that were 3/16" x 1/2" x 7". The pieces are effectively quartersawn. If I were to make another I think I'd make a point of using the plainsawn face for the edges. I cut a top and a side piece out of each and mitered the corners. I reused a jig from another project to hold the pieces a 90 degrees to each other while I glued them. 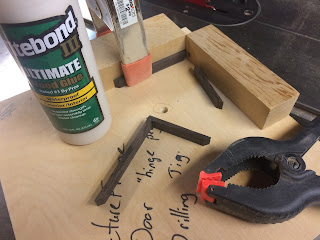 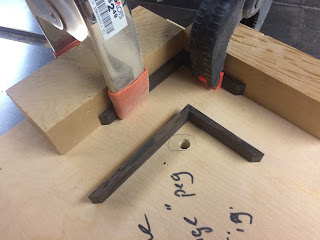 To glue the two halves together I used a scrap piece of Wenge and some tape to hold them together. I kind of wished I'd used a little more tape. When I checked on it a few hours later one of the pieces of tape had come loose. Still, it lasted long enough to get the pieces glued. 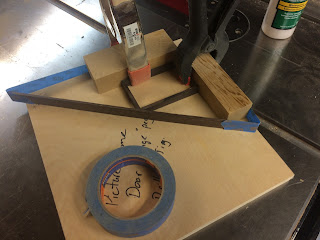 After the glue was set I cut the top piece from the bottom as I wont be able to after the faces are glued on. I used my small parts jig shown in this picture for cutting all these little pieces. 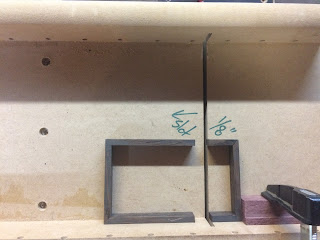 I also trimmed the faces and glued the top faces to the sides but failed to get any pictures of that. I'll put them into my next update.

Weekend Summary
It's kind of a slow start but it is a start. Workshop cleanup, a couple of small projects finished and started and I also trimmed my boards for the top to my dresser. I'm planning on focusing on my dresser in order to get it completed this year.
Posted by Felix Enterprises at 5:38 PM