Did I say the next step was planning the new layout?

I spent a large chunk of my free time over the new year holiday and last weekend working on clearing out the smaller half of my workshop. Now I could have just moved all the stuff into the larger half but that side is already crowded. It'd make my workshop unusable until I unpacked it all after the foundation work was done. Instead I decided to start by cleaning and organizing.

There used to be a TV show on TLC called Clean Sweep. This show was about a team of people coming into a house to help people who were verging on being hoarders and helping them clean and organize. Their exercise usually involved making these people get rid of two-thirds of their stuff. There were usually tears too.

I didn't care so much about the tears or the drama but they had several good points about how to organize. If there is something you are not taking care of you probably don't care that much about it. If you don't care about it, get rid of it. If you come across something and you had forgotten you had it, chances are you don't need it so get rid of it. When I clean and organize it isn't just buying a bunch of plastic bins and throwing stuff into them and stacking the bins in the corner. I try to get rid stuff. I try to get rid of a lot of stuff.

I started by adding some cross braces to some shelving next to my furnace. It gave me a place to move some of my longer lengths of wood. I decided that I'd use the limited wood storage in my main shop for current projects. When I finish the new shop area I'll add wood storage for my over runs and general stock. For now I'll put it in my new auxiliary storage location. I started with the quarter sawn white oak I'd had had sitting on saw horses and moved them to my auxiliary storage. I then moved some of the stuff I just keep around - 3/4 poplar, some walnut - and some of my other over-run to the auxiliary storage. This gave me room to get the wood for my current projects off the floor and into my workshop.

My next step was to clear out my plywood scraps. I had a lot. They were piled on the floor. They were filling up cabinets. It was a mess. I kept some of the pieces that I thought might be useful but by and large I threw them all out. In the cabinet space that opened up and in the adjacent empty cabinet I moved all my hardwood scraps. They'd been on the floor under my makeshift workbench in the smaller workshop. Now they are a little less accessible but much more out of the way. All the scraps that were shorter than one foot went into the burn bin. If it won't go through my planer it is of little use to me.

With the hardwood scraps out of the way it made sense to tear down my makeshift bench. It was just an old cubicle desk on a couple of saw horses. The desk got leaned up against my shelving in the back of the basement and the saw horses were folded up and put away. Why not throw it out? Well it is heavy duty MDF with a laminate surface. I've cut up another one to make shelves and other functions that needed a water proof surface. It'll come in handy later.

I mentioned my inherited workbench. It's a great bench if what you want to do is sharpen a lawnmower blade. If your goal is quality woodworking, it has a number of deficiencies. I started disassembly by banging apart a bin the looks like it had been cobbled onto the main bench. This shortened the bench by four feet and generated a couple bins of garbage. It also showed me that I have salt leaching through the front wall too. 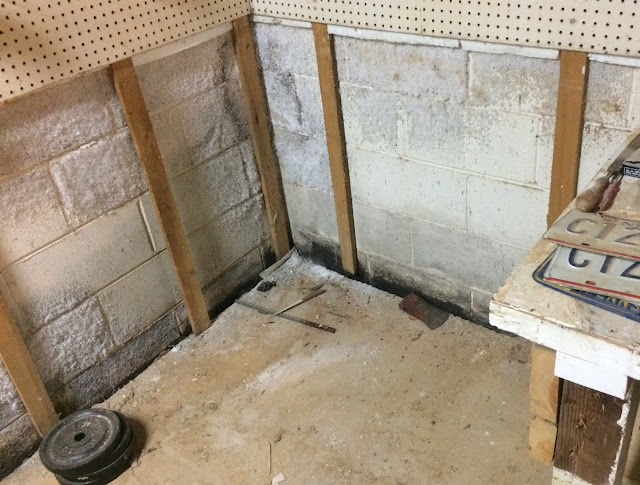 Since I'd had stuff on the bin lid - containers of bolts, the fence for my miter saw - had kept me from opening it for the last ten years or so. Inside I found a bunch of stuff, most of it junk including a few more partial gallon cans of paint. However, I did find some cool stuff in there. 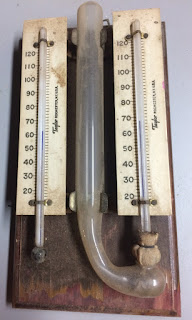 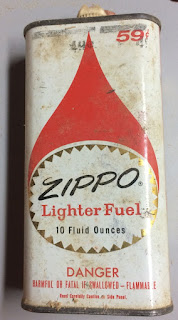 The Taylor Thermometer is pretty cool. I think that weird thing in the middle and on the right is a barometer; however, to be honest I'm not sure how it works. I think this one is circa 1940 so it's old but not as old as it could be. The wood is also a little beat. It's cool but since it probably also has mercury in it I'm going to get rid of it. I think I found a local antique store that might give me a couple of bucks for it and find it a good home - reduce, reuse, recycle...

Next was the pegboard. I cleaned up some of my cabinets in the main workshop which gave me space to move some of my tools that could be shelved to the cabinets. However, there were some tools that just couldn't be shelved and were best off hung. After clearing one piece of pegboard I cut it to size and fit it into a spot between my cabinets. This gave me a spot to hang those tools which didn't fit on shelves. 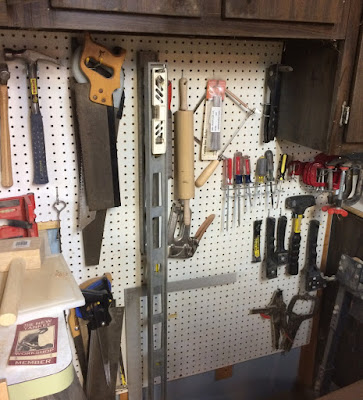 I use empty Kraft Parmesan cheese containers to store screws and nails. They're hold a pound of nails or screws, they're durable enough that I've never had one break even after banging it around and best of all if I drop one I don't have screws or nails all over the place. I'd been storing a couple dozen of these on shelves mounted on the pegboard. 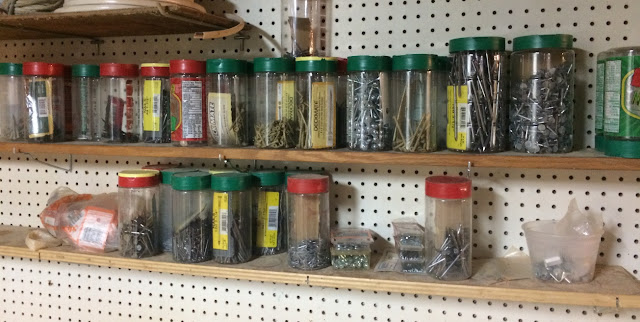 At this point - 40 or so hours in - the smaller workshop is pretty tidy. I've still got the substandard workbench with the miter saw on it but everything else in there is a tool on wheels that can be moved into the main workshop when I need it. 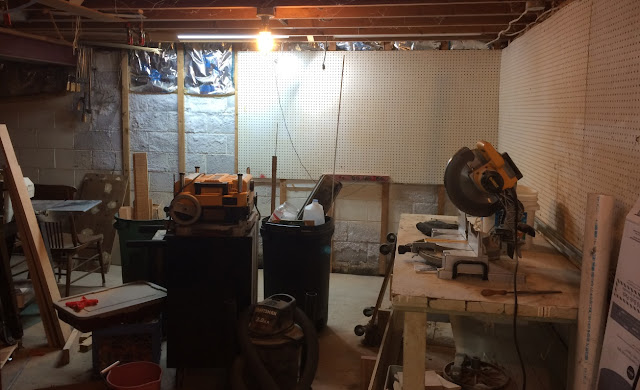 I think the next step is to move the miter saw into the main workshop which will require a new bench to put it on. I've been planning on building a New Yankee workbench for years -about ten - and this is the time.

I'll then be able to get rid of the old bench. It's served me quite adequately for fifteen years; however, it is time to move on. Also, I might have a line on someone who is willing to take the old bench - reduce - reuse - recycle.
Posted by Felix Enterprises at 7:46 PM