I had some time off around our winter holidays this year so I put my time to good use around the house.

My first project was building some shelving for my garage. When we bought this house there was a potting bench in the back of my garage. We don't really do any gardening so the bench really just became a horizontal surface to acquire piles of junk on and under. A few weekends ago knowing this was going to be a December project I tore out the bench and got rid of the junk that wasn't worth keeping. With the space all clear I was ready to install the shelves.

A friend of mine - we'll call him Scott to protect his real identity - also wanted to build some shelves of the same design for his basement. He stopped by my house, we hooked up my harbor freight super duty folding trailer and took a trip to the local DIY store to pick up lumber for both our projects. For this project I needed six 2"x3"x96" pine, two sheets of 1/2" fir plywood and twelve 1"x3"x96" pine. I also picked up some luan pplywoo and cabinet paint grade maple plywood and some 4x4's for other projects.

Unfortunately rather than building our shelves together Scott had to take off early to deal with an issue at home. So, I cut down my 1/2" plywood sheets into four 2'x4' pieces each and used the 1"x3" pine to create an apron around each shelf deck. I cut out a 3/4" x 2-1/2" notch in each corner to make a pocket to fit the 1"x3" pine "legs". I didn't glue anything together and just used deck screws to hold everything together. This all went pretty quick... I'm thinking it must have taken me four or so hours to build all my shelves.

It was when I went to install them that I had my first issue. I'd thought I had enough vertical space for the legs; however, when I went to raise the first one I found that there was stuff in my way. The previous owner had put a shelf into the rafter space in the back of the garage. I've left it pretty much alone since I moved into this house 20 years ago but now it was time for it to go. I first had to pull down a lot of filthy plywood. None of it was any good and I ended up using my cordless Makita circular saw to cut it down and put it out on the curb for the garbage pick up. I was only part way through the job when I realized how dirty it all was, how the insulation was moldy, and there might be mouse droppings. So I stopped, took a shower and changed into fresh clothes and protective gear. Basically a tyvek suit, my dual canister respirator and disposable shoes. It was hot work even though it was only in the 40's F but at least I wasn't getting moldy fiberglass insulation in my hair and lungs.

The cleanup took the rest of my first day including cleaning the mess I made pulling down the plywood and old insulation. The next morning I started putting the shelves together. It's a job that would be much easier with a little bit of help; however, I am used to needing to do large projects by myself. The main trick is figuring out how to hold parts in position without needing to use your hands.

In my case I set my base shelf on the garage floor. I used 2-1/2" screws to attach two of the legs to the base shelf. Then using my 4 ft level I carefully plumbed two of the legs and used a couple of braces to keep them in position. I then did the same for the other two legs. I used more scraps as spacers to make sure all the legs were space appropriately. To add the remaining shelves I measured the location of the bottom of the shelf and screwed a brace to each of the two outside legs. This allowed me to set the next shelf in the correct location and not need to use my hands to keep it in place. I used a pair of 1-5/8" deck screws to tie the shelf to each 2"x3" leg.

After getting the second shelf in place the rest was relatively easy. I removed the angle braces that I'd use to hod the legs in place and added two more shelves to the first "tower". I then added another base shelf next to the first tower, added another pair of legs using braces to keep things square(ish) then using the same techniques added the rest of the shelves. When it was all done I slid it back against the wall, hauled my tire rack back in from the car bay in the garage and then put all the junk I wanted to keep back on the shelves.

It isn't organized yet but I can wait until nicer weather in the spring to do that. Other than having to clean out some legacy lumber and moldy insulation my installation went pretty easy and I'm very happy with the results.

Scott did eventually show back up and with my help built all his shelves. He took them home and set them up in his basement. He and his wife - we'll call her Katie to protect her identity - are very happy with them. He's got 16' of shelving with three shelves per tower.

But wait! That's not all! I also assembled eight or nine of my magazine boxes. But that's a story for another blog post.

Since I'd already gotten my trailer out and it was due for inspection I took it in and had the lights checked which is pretty much all that is done for a NYS light trailer inspection. I don't think I've talked about this elsewhere on this blog...  When I built the trailer I wanted a way to check the lights without needing to hook it up to my truck. I built a test harness from some switches, an extra 4 pin trailer connector and a 12v adapter I bought from Amazon. This is probably a good topic for a short blog post. But basically I can plug in my trailer and then test each light individually.

I do think I've mentioned elsewhere that my wife paints miniatures. She's actually really good. And by pretty good I mean she's a studio painter for a couple different miniature manufacturers. As a result she has a lot of supplies that she uses in her hobby and wanted a storage unit to keep most of the everyday supplies in. We didn't put a ton of thought into the design but she did decide she wanted to take a 6ft wall for her built-in storage unit. The first piece would be half that so she spec'd out drawers and trays for a 3ft wide unit. 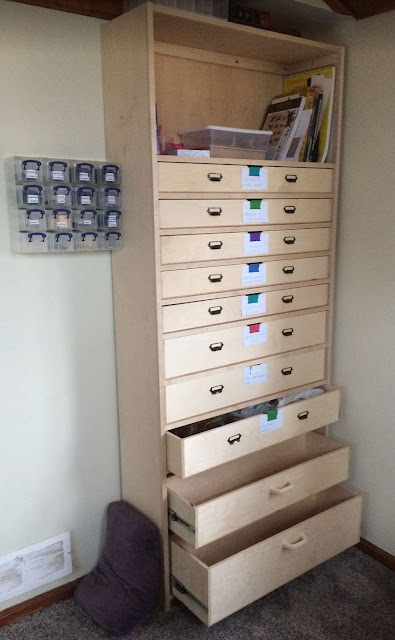 The cabinet consists of two deep drawers on full extension slides on the bottom, three six inch trays, five four inch trays and an 18" shelf on the top. The pulls on the trays are some very inexpensive library-style pulls I bought off of Amazon. The pulls on the drawers are shop made.

Jen wanted to be able to have some way to indicate the tray contents. The long term plan is to add veneer to the front of the trays and using the veneer fashion a slot that holds 3x5 cards. Until then we've just used large binder clips to hold the cards in place.

The cabinet took me about a day to put together. I "cheated" in that only traditional joinery is holding the top and bottom in place. That's just a tongue and dado joint. After giving the glue a chance to dry I added the back which is just 1/4" luan. The back is glued and stapled in place with 1/2" 18 guage staples.

After giving the glue on the back a chance to dry I started adding the shelve. All the shelves are held in place with pocket hole screws. I used spacers to make sure they were all consistent heights. I did a fairly good job. I was off by about 1/16" on one side after installing the nine shelves.

After getting the cabinet in place it felt a little top heavy so I added a screw strip along the top back and used some long washer headed screws to fasten it to the wall. 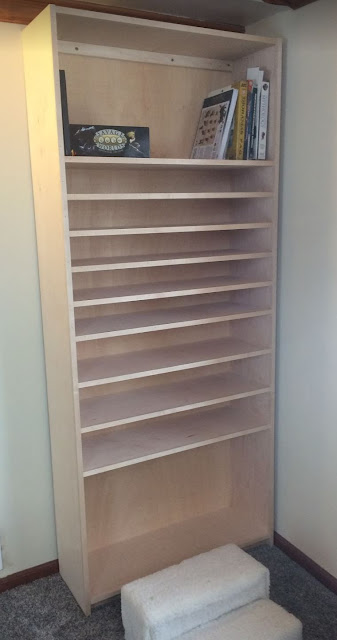 It took me another day to build all the drawers and trays. Again I "cheated" a little bit. I'd originally planed to make the trays and drawers out of resawn poplar and then to use through dovetails. For expediency I ended up making them out of 1/2" baltic birch plywood and using a tongue and dado joint on the corners. The bottoms are just 1/4" luan face glued to the bottom. This should be plenty strong enough for the weights the trays will be holding and the simplicity of the construction allowed me to build them all in a day. 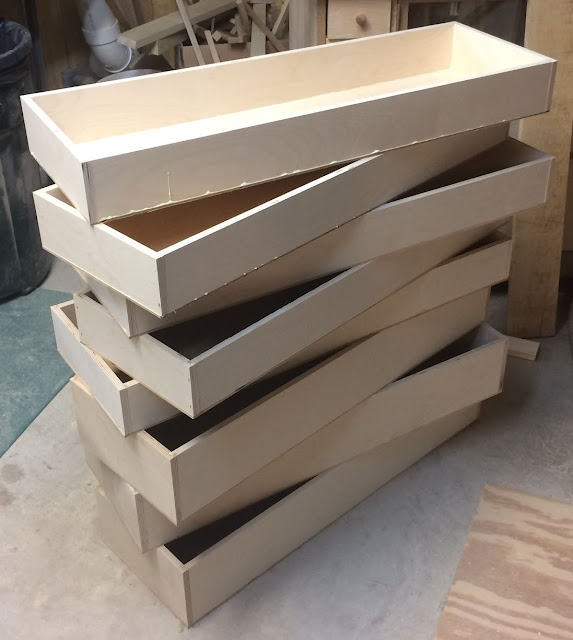 After the glue on the trays dried I used a rabbet bit on my router table to make a finger pull on the front that would give room for the binder clips. I also added the pair of library pulls to each tray.

All in all it was a pretty successful week of getting things done around the house. I'm pretty happy.

Posted by Felix Enterprises at 6:53 AM