Saturday was a short workshop day but I wanted to get the side panels sanded and the frames glued up so I could do joinery work on Sunday and that's pretty much how the weekend worked out. Sanding the panels was pretty quick work. I'd already sanded them on my open ended drum sander to flatten them after glue up so all I needed to do was hit them with 80, 120, and 180 grit sandpaper on my random  orbit sander. With that done I glued up the side panels and checked them for square. 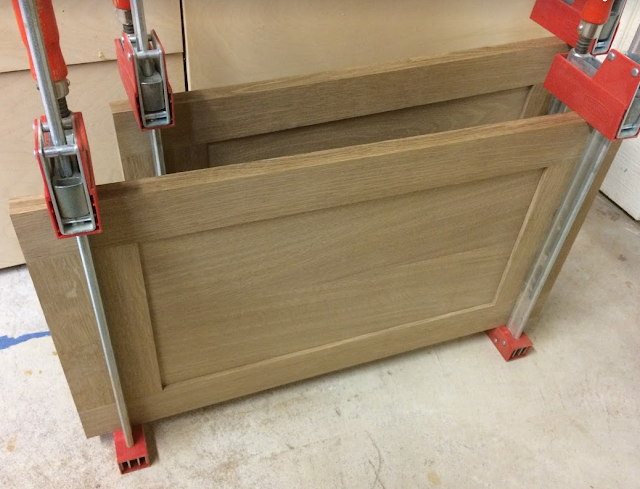 I really love the stub tenon and groove joinery method. With clean shoulders the panels just come together square naturally.
Since sanding and gluing didn't take that much time I started thinking about the next step which was going to be cutting joinery for the top and bottom panels. The grooves holding the top and bottom panels were going to be stopped grooves 1/2 inch from the top and the bottom.
Making the joinery symmetrical made things easier in a couple of ways. First, I didn't have to worry about right and left as the panels could be flipped over or spun to fit. Second, I could use the same setup for cutting the top and bottom grooves.
Stopped grooves call for using a template and a router. With only 1/2" between the top and bottom and the panels I needed a special template to clamp in place. I finished up my Saturday getting that made with some scrap plywood glue and staples.
I ducked back into the basement in the evening to scrape glue.
Sunday I got most of the afternoon in the workshop. I did have a hard stop of a puppy play date late afternoon but I still had a number of hours to get stuff done.
With the panels all glued up the next step was to cut joinery. I found a piece of cabinet grade maple veneer plywood offcut in my workshop that looked to be big enough to get a top and bottom panel and maybe the middle divider. I cut it to rough size then used an off cut to space my templates. 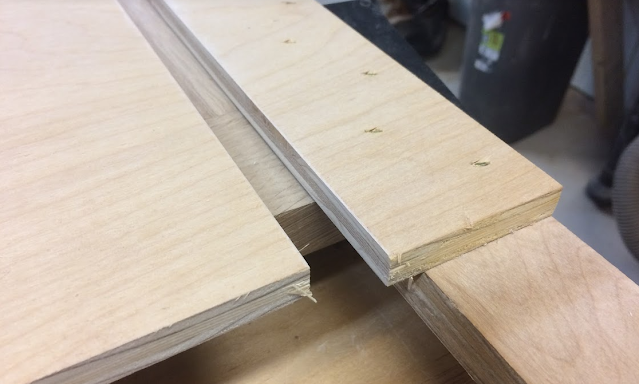 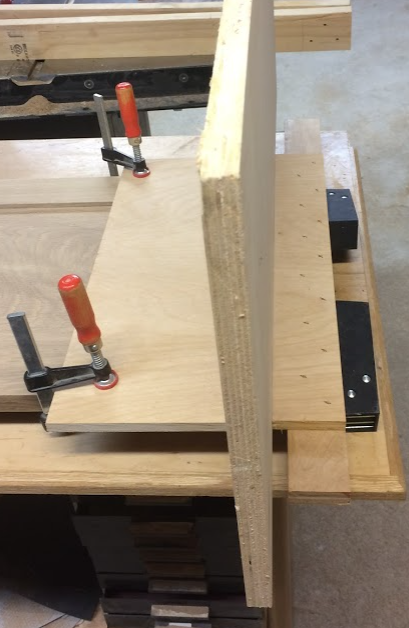 Getting the template spacing set 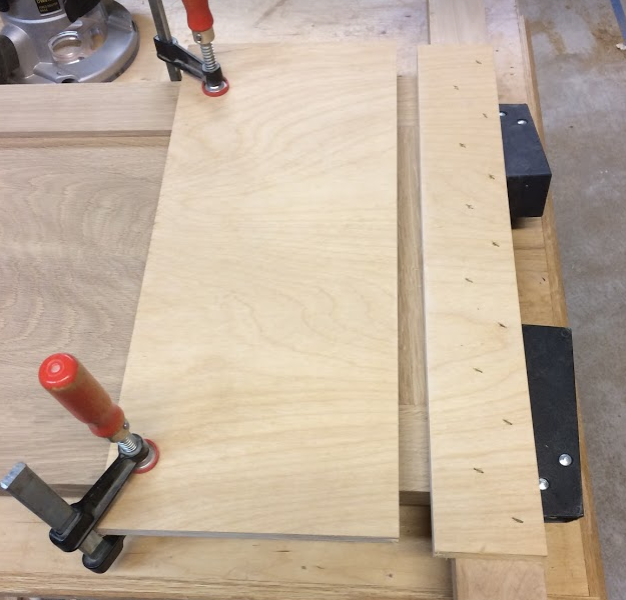 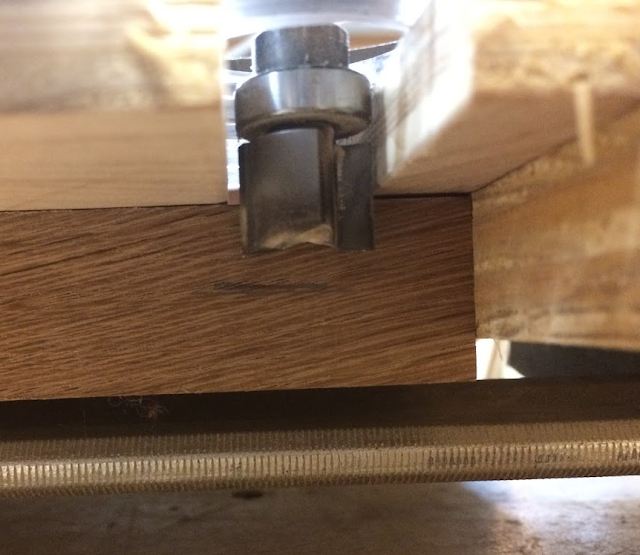 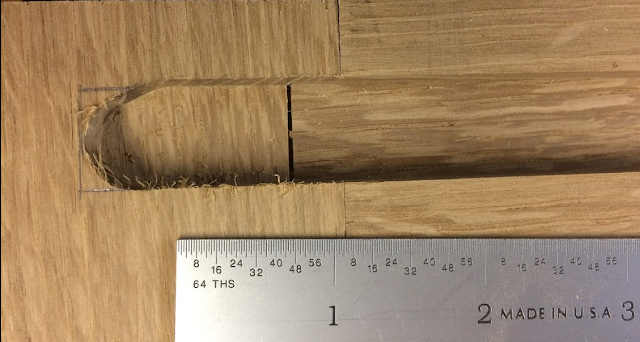 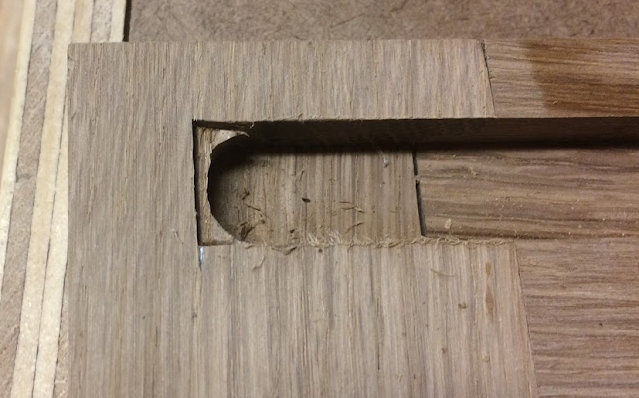 The pictures above do a pretty good job of showing my process. The template for the top/bottom edge was a piece of 3/4 inch plywood glued and stapled to a 1/2 inch piece of plywood. The 1/2 inch ply was cut to be 1/2 inch wider than the 3/4 inch so when I glued them together I just aligned on of the edges. Then when I clamped it to the top of the panel the top edge of the groove was automatically set without me needing to measure.
I set the width of the groove by taking an offcut and wedging it between the two halves the template. This is a really effective technique for getting a groove the exact width of your plywood. There are couple of effective table saw techniques for getting good fitting grooves but they all require more setup effort. If you've just got a few grooves to cut, this is the way to go.
You can see that I had a pencil line about 3/8 inch down from the top. I set my router bit depth by eye because I didn't really care exactly how deep they were. Since I had cut the plywood a little over-sized I would be able to cut it to fit later. I routed the grooves in two passes making sure the bearing was riding against the template on the first cut. I've made the mistake in the past of not checking and just routing into my template.
These are stopped grooves so I again made a pencil mark and used my eye to determine when to stop. This isn't fine furniture it is a shop project, and any small sloppiness in the length of the groove will be hidden after I put trim covering the plywood edges.
After routing the grooves I had rounded ends so I pulled out my chisels and chopped the ends square. I used my cheap chisels that I had been using to practice with my Tormek. It went pretty smoothly.
I test fit the top and bottom panels then trimmed them to size.
My plans called for an off-center middle panel but after thinking about it I realized if I centered the middle panel I could use a dado blade in the table saw and do both panels with the same setup. I don't have pictures of this step but it is really the same process as cutting the grooves in the rails and stiles. Basically set the table saw fence so the blade takes out the middle of the dado. Flip the piece end-for-end and run it through again. You now have a centered dado/groove. If it isn't wide enough, nudge the fence over a hair and make another two passes. Repeat until the dado/groove is a perfect fit.
The only tricky part of this approach is remembering that any distance you move the fence is doubled in the width of the dado / groove.
Since this is a table saw technique it really only works on through cuts.
After all my joints were cut I did another dry fit. 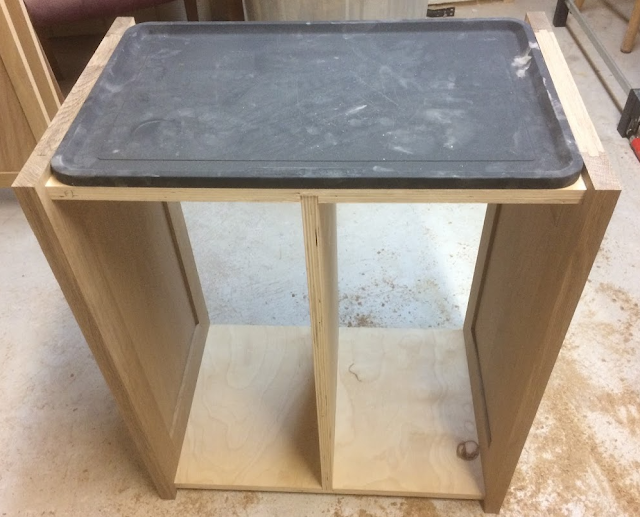 This is only a dry fit. Friction is holding it together. Turns out my technique for getting a tight fit on the stopped grooves was a little too good. I could sand the grooves a little wider but I think that instead when I am sanding before the next stage of gluing I'll just hit the panels a little harder along the edges and see if that makes them fit better. If I happen to sand through the veneer it will not be that big of a deal because it will either be inside the cabinet, under the cabinet or even on top it will be covered by a rubber mat.
This is where it is at. If I can get some workshop time tomorrow night I'll do my sanding and maybe gluing. I haven't been able to get into the workshop during the week the last month or so but there's always hope.

Posted by Felix Enterprises at 6:50 PM