I can hear everyone now, "You start your blog and then you disappear. Where have you been, how is your dresser going?" Well for a quick recap of the last month or so, the dresser is moving along. I've gotten the sides attached, the door made and the drawer boxes made. I'll put a post up on the dresser - with pictures - soon.

I have been busy in the workshop though. As I mentioned previously the dresser has moved from being a plywood box to looking like an incomplete piece of furniture. The next stage is to cut the drawer fronts and then start putting finish on the carcass. I do have a finishing room - more of an office that I do finishing in - but most of my work fits on top of a couple of saw horses. This will not work for the dresser for two reasons: first it is too heavy to lift up onto the sawhorses and most important, it is too large. If I did get help to lift the dresser onto the sawhorses it would be too high for me to effectively put the finish on it.

What I really need is something shorter than a sawhorse but still tall enough so that I didn't have to stoop down to the ground to get the feet. I've seen a number of plans for short rolling carts that intrigued me; however, since my finishing room is also my office I really didn't want to have a bulky shop cart taking up space. Going back through my magazines and doing a little internet research - googling - I came across plans for some short sawhorses (saw ponies). 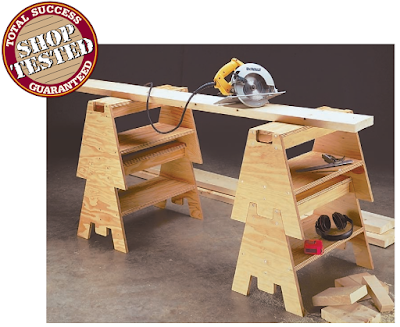 A couple of years ago I traded in my Chevy Silverado 1500 for a Subaru Forester. The Silverado (and other GM vehicles built on the same platoform/model) had a small defect where the anti-lock brakes would corrode and stop working appropriately. But now I don't  have a convenient way to transport full sheets of plywood anymore. I have a friend, we'll call him Garrett to preserve his anonymity who has a truck and also wanted some saw horses. We made a deal, he helped me pick up plywood and I'd build him a set of saw ponies at the same time I built mine.

So, long story short I'm building eight of these not just four.

The plans are pretty straight forward and building the sawhorses went pretty easy. I started by breaking down two sheets of plywood in my garage. I have a worktable that I can set up but it takes a bit of effort so I just threw a couple of pieces to 2"closed cell foam on the garage floor and laid the plywood on top of that. The foam gets a little chewed up but the convenience makes it worth while.

I started by ripping a 17" swath off of one side of two pieces of plywood. These were destined to become the legs. To make the wider remaining pieces easier to get into my basement workshop I crosscut them to make four 31" x 48" pieces. If I'd been a bit smarter I would have ripped both 17" pieces from one sheet and saved the other one as I'll explain in a little bit.

Per the plans I made a template for the sides out of 1/4" hardboard. While I was laying it out I also marked screw holes and the locations of the dados and rabbets. I made a number of test cuts to make sure the legs would stack properly.

Shaping sixteen legs was a bit boring but I got through it all in one session.

I then set up my table saw with a dado blade and spent a little time to tune it to be the same width as the plywood. And by a little time, it took me somewhere between half an hour and an hour. Once I was happy with the size I used the hardboard template to set the fence and then cut the dados and rabbets.

The next step is to cut the shelf and top of the sawhorse so I swapped the dado blade for a standard crosscut blade. In the process I saw some plywood leaving against my shop wall that I had miscut for another project and decided to use it for the other plywood parts. In the end this worked out relatively well except that I still have the larger squares of 31" x 48" plywood. Oh well...  They will be more useful than the smaller pieces I re-purposed. The other issue is that my older plywood was a little thicker so I hat to recut my dados in the sides. I also used the template to drill all the holes in the sides.

After cutting out the shelves, tops and braces I then spent a few nights assembling them. I used copious amounts of glue and lamented at the low quality of plywood.

Why the lamentation? Well, I think it is partly that I am used to high quality cabinet grade plywood and for these saw horses I used construction grade fir plywood. The plywood had a large number of voids and other flaws which made screwing the parts together a little more challenging. I don't think buying inexpensive plywood was a bad idea. Making saw horses out of high quality plywood would have made them cost more than store bought.

However! Regardless of the quality of the plywood and my errors with the screw holes the saw ponies are all assembled and are plenty strong. I wouldn't dance a jig on one of them but I did climb up and stand on one. They will be plenty strong for my purposes.

I hope Garrett is as pleased with his saw ponies as I am.

Posted by Felix Enterprises at 5:28 PM