While looking for old pictures of the gaming table I can across pictures of at least one other project that slipped through the cracks. This is one of them.

The company I was contracted to for the last two years was large enough to have a Toastmasters International Club that met at lunch twice a month. I have a fair bit of experience doing extemporaneous speaking but almost none writing, practicing and giving prepared talks. So I joined the club in the spring of 2015. It was a fabulous experience and I recommend it to everyone.

Our club had printed name cards on heavy card stock for everyone. It wasn't that we didn't know each other's names, we sometimes had guests and it was part of the formality of the meeting. My name card was new so it stood up fairly well; however, other people in the club had been there long enough that their cards wouldn't stay folded.

November 2015, I made these name card stands out of wood in my scrap bin. The best part was how easy they were to make. 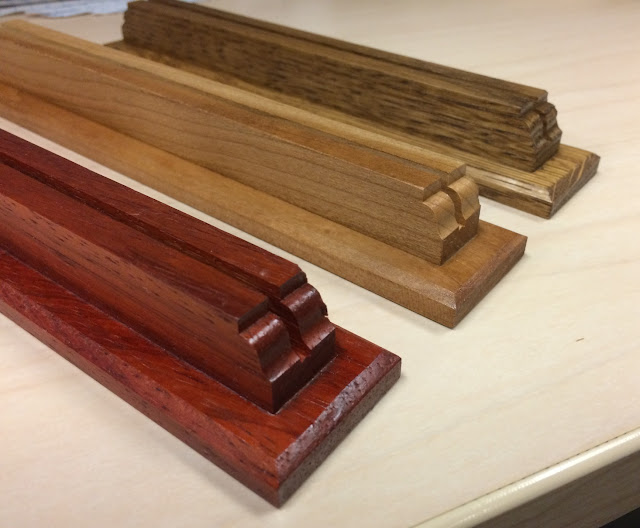 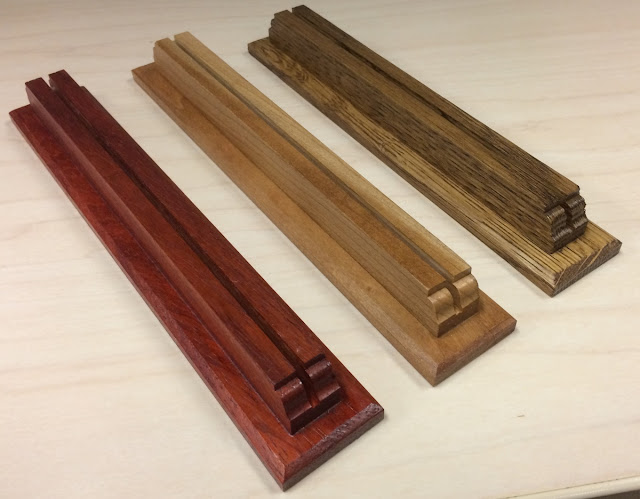 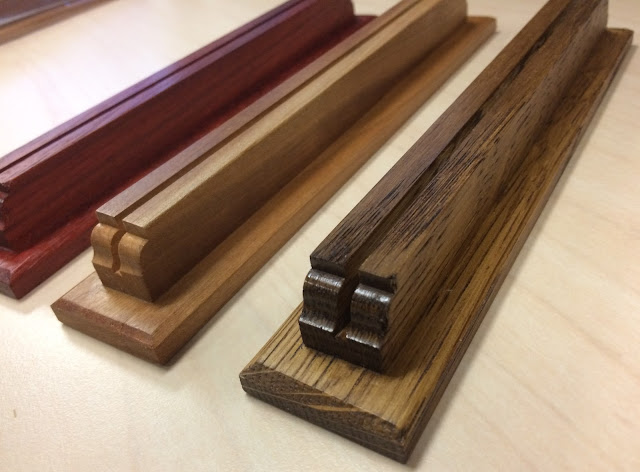 Making them with wood from my scrap bin made them "free" but it did add a little complexity to the construction. I generally throw out anything too short to go through my planer so that wasn't an issue; however, most of the pieces were still pretty small. Small enough that I wasn't able to put the ogee on the end of a single wide board and then cut them to width. I had to put it on each piece individually. It was enough of a pain that most of the card stands got a bevel I could cut on the table saw.

To make assembly go a little bit quicker I made a jig I could use to glue them together. I think I clamped them, let them sit for 20 minutes while I did other projects in the workshop. Then it was rinse and repeat. 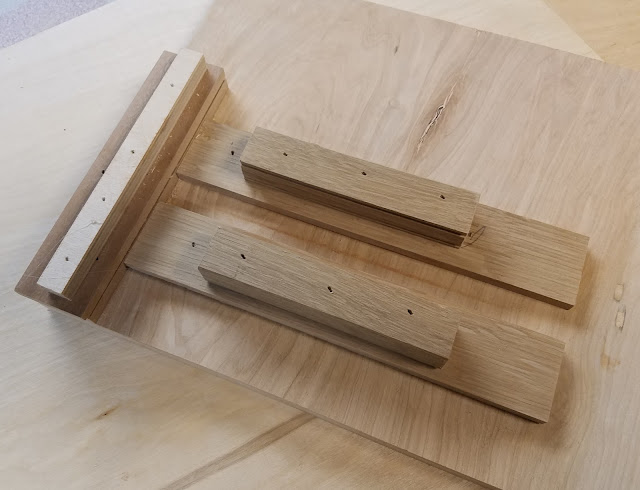 I built the stands upside down. I placed one of the slotted taller pieces in the bottom then the taller pieces to the sides and back would properly index the bottom. This took all the guesswork out of assembly which made it go very smoothly.

I used my small block plane to put a quick bevel on the bottom plates. Again I tried using a small bit in the router table but it was too slow and speed was one of my goals. After the glue dried on all of them I gave them all a quick couple of coats of wipe on polyurethane.

I think I made around twenty of them from padauk, cherry and white oak. It's possible I used a few different woods but I think this was pretty much it.

They were greatly appreciated and despite not actually being fine woodworking they look really nice.
Posted by Felix Enterprises at 5:42 PM