A few weeks ago my friends (Robin and Will) stopped over to help with tearing up the carpeting in my dining room. That's barely a job for two people much less four so I figured Will and I could work on my dust collector closet.

Again I may have been a little too ambitious; however, I'd been hoping the two of us could get it mudded and the PVC to collect the dust from my table saw run. Instead it took the two of us most of the afternoon just to do the first coat of mudding. We unfortunately didn't get to the dust collection. 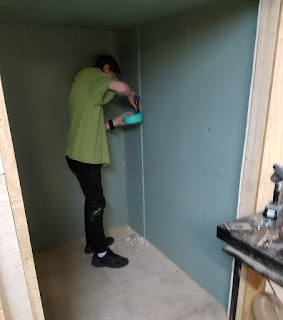 Let me start by saying I understand most of the principles behind a good mudding job, I just have acquired little of the physical skills to execute them. I probably did Will a miss-service in improperly mentoring him in his first drywall experience. Hopefully he's not scarred for life.

In any case over the next week or so I sanded, mudded, sanded, mudded until I figured it was good enough for a basement dust collector closet. This week I primered and painted the closet.


I painted the closet using the leftover paint from my dining room project so it's a blue/grey color. I'm a little better at painting than I am at mudding but not nearly as good as my wife. Regardless, it's a basement workshop closet.

In the back of the closet you can see the vent/filter for releasing the air pressure when the collector is running after I've got doors on the front. 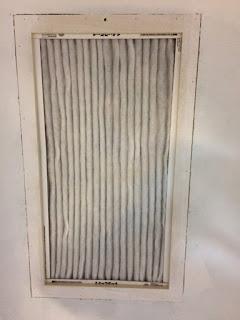 This is a furnace HEPA filter wrapped in a poplar frame. To keep the filter from just blowing out of the frame I put a hinged back on it and used a bolt with the head cut off and a thumb screw to keep the frame shut. 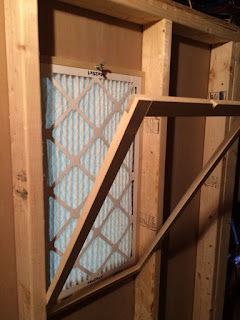 I didn't do any fancy joinery on the front half the frame. Butt joints, glue and a couple of brad nails. Since the back frame isn't going to have the framing to help hold it together I half lapped the corner joints. Since I only had four corners and it was going into my basement shop I just used some scrap to set the height of my regular table saw blade and just made a bunch of passes until it was done. Not furniture quality work but perfectly acceptable for my purposes.

The other thing I did this last week was dry fit the collector piping for my table saw. It kind of winds around through a wall and under my table saw so I wasn't able to get a good picture of it' however, I did get a few adequate pictures. 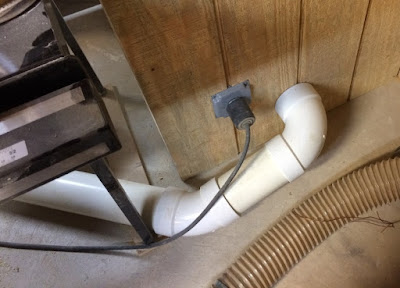 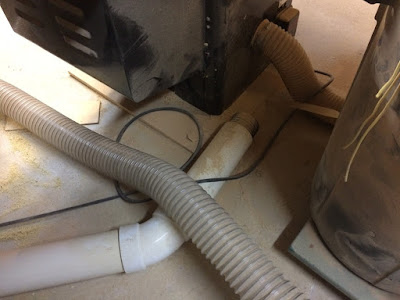 I had a couple of concerns with getting the placement of the initial hole correct. The outlet is attached to a stud and I wanted to avoid it and the 220V line running down to it. The next stud over was less than 16" since we laid out the studs from the back of the closet when we built the wall. Also the floor wasn't level so I know the bottom plate is not at floor level but is an inch or so high.

I picked what I thought was a relatively safe spot and drilled a pilot hole through the T1-11, then using a stiff piece of wire I poked around to make sure I'd have enough clearance. I used my compass to draw a circle the outside diameter of the PVC and cut out the hole using my jigsaw. I used a half round rough rasp to clean up the hole so the pipe fit tightly.

To get the correct location to make a hole on the inside of the closet I pushed a short piece of PVC through the outside hole, traced the interior diameter on the back of the drywall using a pencil. I then transferred that line to the outside by pushing some wire nails through to the inside of the closet where I could use my short PVC off cut to trace the outer diameter. Then it was  just a matter of cutting it out with  drywall keyhole saw.

At the end of the pipe next to the table saw you can see that I have a threaded connector for dust collection hose. I'd originally planned to make the connection a solid connection; however, it would have ended up costing me another $20 or so in parts and would have meant a lot of fiddle fitting. A foot of flexible hose at the saw won't be too bad and will have the added benefit of giving me a little flexibility, having an easier cleanout and not having to worry about transferring any vibration into my collection pipe.

All in all, I am happy with how it's all coming out. I have the end in sight. By the end of the weekend I should have the collector back in the closet and the table saw hooked up. I just need to build my doors and run a couple more collection pipes.

Posted by Felix Enterprises at 4:46 AM