So what have I been doing all summer? Well, stuff... Some outdoorsy stuff, some indoorsy stuff. I did keep a few woodworking projects moving over the summer but not too much.

I bought a Harbor Freight 4'x8' folding trailer this summer. What's the big deal with that you ask? Well, since I traded my Silverado in for a Forrester I've not had a good way to get plywood home from the lumberyard. The Harbor Freight trailer was such a good deal. It's normally a $400 trailer but I got it on a better than normal sale. Great price, I just had to put it together.

I may have picked a poor day to start putting it together. I started bolting it together in my garage and part way through I started not feeling well so I laid down on the concrete to try and cool off some. I figured it was just a matter of having a typical software engineer physique. Turns out it was a 93 degree Fahrenheit day in Upstate NY in October. Set a new record high. <sigh>

Anyway, over a couple of weeks I got it put together, learned how to grease trailer wheel hub bearings and how to wire a trailer. All of these things are easier than you might think if you haven't ever one it before.

This last weekend I bought a sheet of 3/4" PT plywood to deck it with. Adding the plywood decking was quite annoying. The first step was to use a spade bit to make recesses for the bolt heads sticking up through the frame. That went pretty well except for needing a few tries to get everything lined up right.

The directions called for using 3/8" cross head bolts to fasten the decking to the trailer except I couldn't find them in my Home Depot. I substituted carriage bolts and they seemed to work out well enough. The most annoying part was trying to get the bolt holes in the decking in the right place. What I found worked for me was getting a couple of bolts in place then folding the trailer so I could work on each half vertically. I drilled a hole in about the right spot then when I figured out where the hole was I'd angle the drill bit to get it through the hole in the frame and then straighten the drill. So some of my holes are slightly elongated but I don't think it'll matter in the long run.

What else did I do over the summer? Well, I flew to Chicago to pick up my dad then drove to Carbondale, Il to see the eclipse. How was it? Well, I laughed, I cried, it was better than cats.

We experienced about two and a half minutes of totality; however, unfortunately a cloud occluded the sun for about two minutes of it. 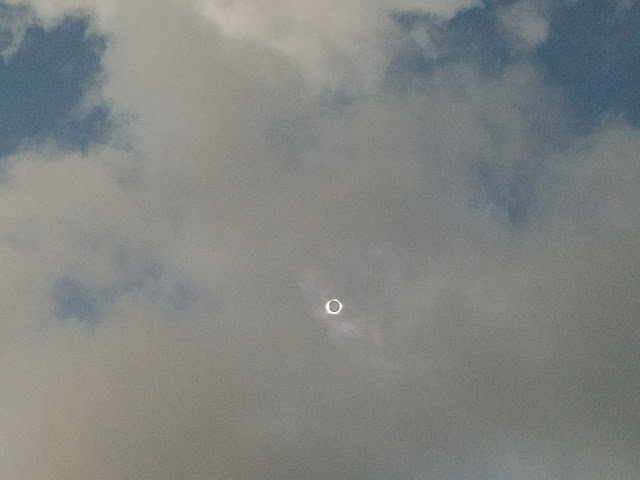 Regardless  I got to spend a long weekend with my father and 100 or so new friends from Astronomy Cast's fans as well as Fraser Cain and Pamela Gay.

And now! Back to woodworking season!

Posted by Felix Enterprises at 4:34 PM