It's week 7...  or is it really week 8 of the New York Pause due to Covid 19. Frankly I am lucky to be able to keep track of the day of the week much less which week we are on.

This last weekend I did get a few hours in the workshop. Again not as many as I would have liked but I passed a couple of milestones. Saturday I did final fitting on the case and got it glued up. Sunday I got the top glued up and spent some time prototyping the door.

I did have one small task before gluing up the case and that was to cut the Sapele trim on the top rail down. This was a simple task of getting out the table saw sled and lining the edge of the trim up with the blade and making the cut.

I dry fit everything first and as a happenstance I realized that the middle panel was sliding in much easier when there was a brace place immediately underneath it. I did a bunch of fiddling while I had the case dry fit and clamped to make sure everything would come out square. I was able to get the right side panel square and the middle divider square with the bottom shelf but the left side panel didn't also come out square. I double checked all my measurements, checked that the top rails were the right size and were not creating a rhomboid. I just couldn't get it perfect.

After much gnashing of teeth I decided to just go ahead and glue it up. The variance was so slight that I didn't think it will matter so long as I got the drawer side of the cabinet square. The left side is just going to be shelves anyway.

I added glue to the left panel dado, added the bottom shelf, stood it up on my workbench with the braces to hold the bottom shelf in place, then added the right hand panel. I added a couple of k-body clamps across the bottom to hold everything together while I inserted the middle panel and the two top rails.

I'd previously screwed the separators to the top rail so adding and clamping the middle divider into place went very smoothly. I then obsessively went back over everything to make sure panels were seated in their dados and that the case was square. 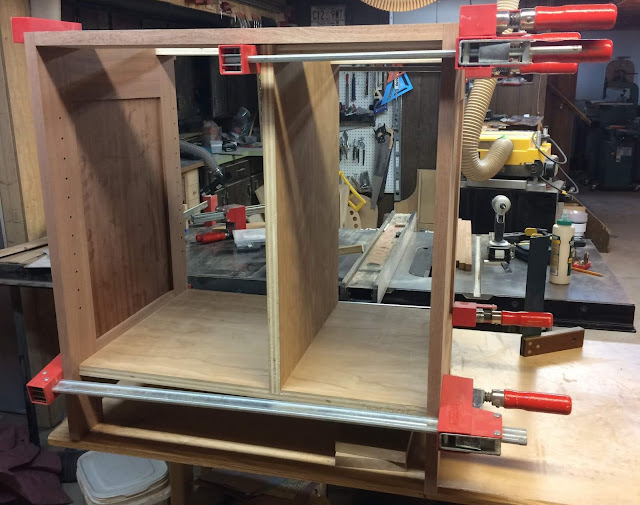 I was using Titebond 3 so I gave the joints a good 40 to 50 minutes before moving it from my bench to the shop floor. My wife was in the area so I had her help me lift it down to avoid any unnecessary stress on the glue joints. Once on the floor I was able to add screws in the pocket holes and drill and screw the middle panel in through the top rail and that pretty much summed up my tangible progress on Saturday. 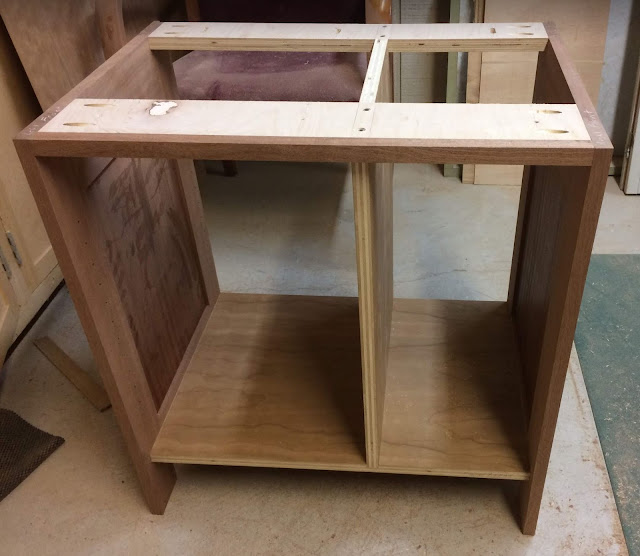 I did spend some time staring at the remaining pieces of Sapele I had left and started planning where I was going to get the wood for the top, the door and the false fronts on the drawers. I got pulled away from my staring at lumber by an offer of a walk with my wife in the beautiful weather we were having. It was worth quitting early for that.

I was in a bit of a mental debate because I had planned the top to be 18-3/4 inches deep but the lumber I had was going to be at best 7-1/4 inches wide or 9 inches wide after cleaning up and straightening it. If I used the 7(ish) inch boards I might not be able to get all the front pieces out of a single board. If I used the 9 inch boards I would only be able to have an 18 inch top.

After giving it some good thought over night I decided that an 18 inch deep top would be just fine. So first thing Sunday I cut the ends off the 9 inch wide board (the grain was straighter there), cleaned up the edges, flattened 6 inches of one face, ran them through my planer with a carrier board to get one face flat, then flipped them and got the other face flat. Test fitting the two pieces to align the grain and hide the joint the best I could I found that the best looking joint was also the best fitting.

More glue, a 40 minute wait to let the glue dry then I removed the clamps and scraped the semi-dried glue squeeze out.

Setting the half-finished top on the cabinet makes it almost look like a piece of furniture.

Next I turned to designing my door. Looking at my plans I realized I hadn't written anything down for the rails and stiles. Frankly I don't remember if I did that intentionally or if it was an oversight. Doesn't matter at this point, just have to make a plan and execute it.

I found some scrap pine in my discard bin and held it up in the opening and decided it was way too wide. I found a shim lying on the floor nearby so I help that up and decided it was way too narrow. Since the pine was essentially just garbage I trimmed it down to 1-3/4 inch and held it in place in the door opening. Eureka! I cut the rest of the pine to 1-3/4 inches wide and cut them to length so I could mock up a full door. Looks fine to me. 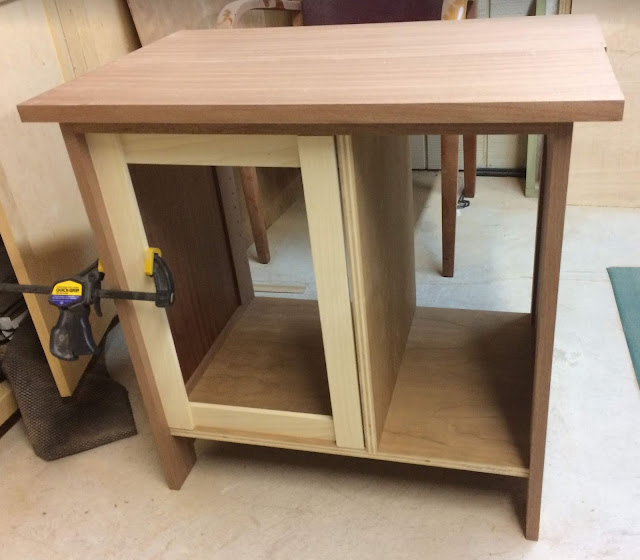 That's pretty much where I left things with the console on Sunday. I didn't want to sand the top until I was sure all the moisture from the glue had evaporated. I didn't feel like cutting out the pieces for the door. I'm pretty sure I'm going to go with half laps rather than stub tenon and groove and I didn't want to have to do the extra thinking required to cut a joint for a half lap including a 1/2 inch by 1/4 inch rabbet around the inside for the glass.

I did however, make some supports for storing some 4x4 lumber I've had sitting on the floor in my garage. These supports were patterned off the lumber rack I built for storing the bulk of my wood. I pre-drilled holes and them mounted them to an exiting wall in the back of my garage using a 4 ft level to keep them the same height and a speed level to make sure they tilted slightly up rather than slightly down.

One nice thing about being stuck in the house, it has encouraged me to start knocking off those to-do items.
Posted by Felix Enterprises at 3:57 PM