What I did over my summer!

Yup, I am still here. What happened? Summer and work. I'm one of the fortunate people who can work from home. In fact the company I work for has offered us the ability to work from home permanently. Or at least permanently until they change their minds. Yay!

Just because the blogging stopped doesn't mean the woodworking stopped. Woodworking slowed down but didn't stop.

I finished my hand tool workbench last spring. I flattened the top of the bench using a scrub plane I made from an inexpensive Harbor Freight jack plane. It worked about as well as you'd expect. The plane is garbage. It isn't possible to adjust the frog to give the plane blade a flat surface to ride on. The blade and the chip breaker are stamped steel. To get the tension on the chip breaker it has a big hump near the bottom that interferes with the letting the lever cap sit on top. With the heavy scrubbing the parts would work loose and I needed to put them back together again. I got the job done but figure I should have bought a slightly less cheap plane from Home Depot or Lowes. 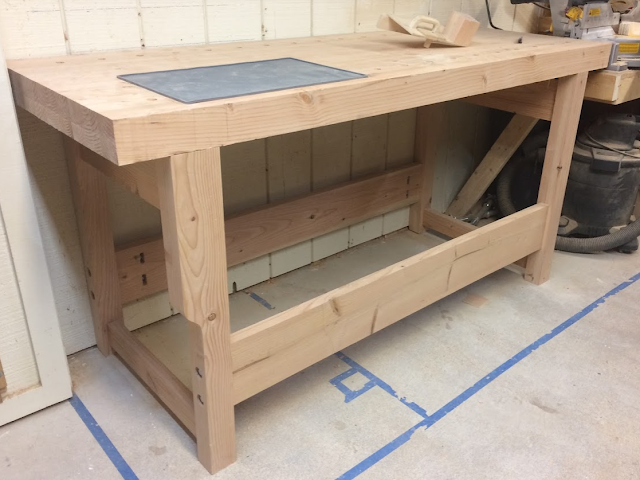 After getting the top planed flat I drilled some dog holes using my hand drill and a jig to keep everything straight. 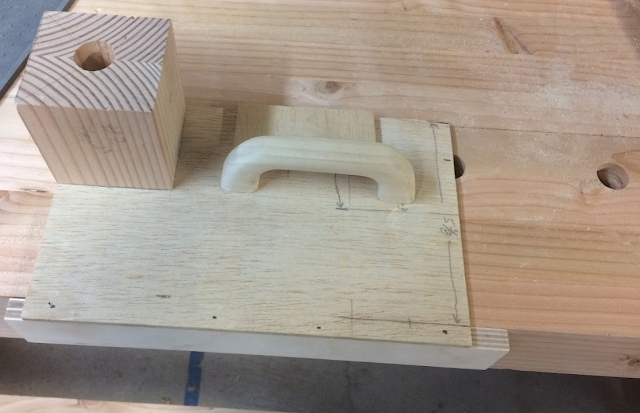 Then I bought a big acme threaded bolt from Amazon and added a leg vise. 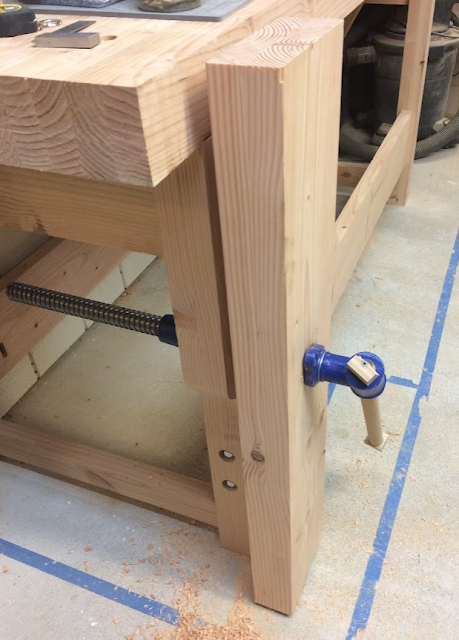 I added a dowel to keep the leg from swinging when I turn the screw. I also added an angled block on the bottom to keep the chop from racking when clamping something in it.

The handle is still a temporary piece of dowel. I need to make better endcaps for it. I just got a 3d printer so perhaps I'll print new end caps. I also need to bolt the top to the legs a little more solidly. Right now the top slides off when I clamp a board.

I made some built-in shelves for my gaming closet. I was hoping to better utilize the space and be able to store more things. That didn't happen but at least the games are easier to get to now. 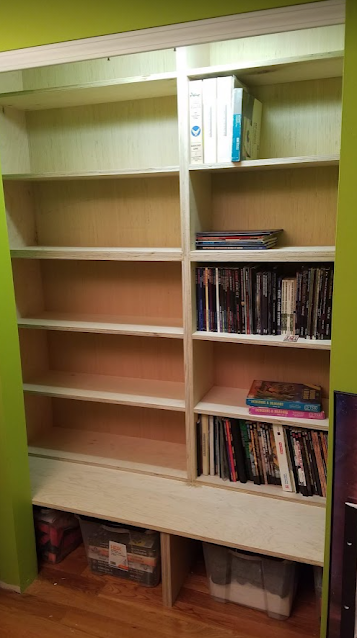 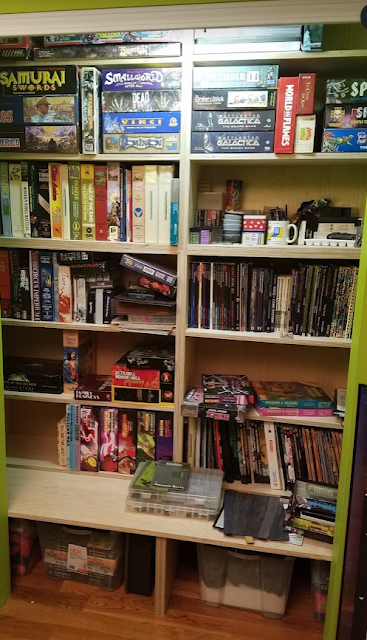 I wanted to be able to use my personal laptop on my office desk as well as my work laptop. So I built a French Cleat shelf that hovers my laptop over my work laptop. 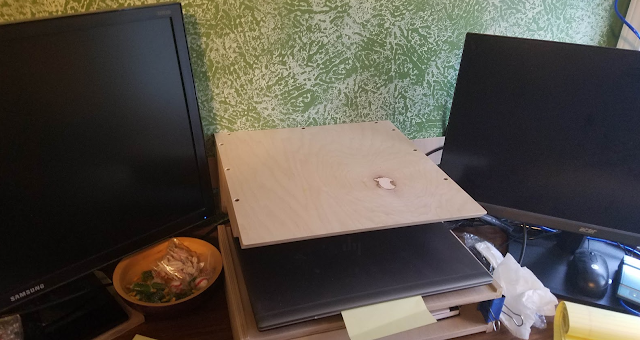 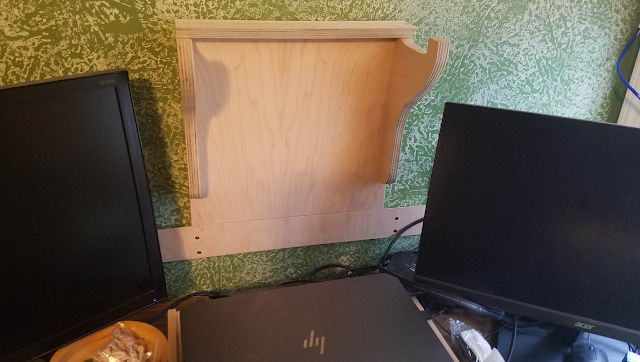 Last fall one of my neighbors had a garage sale. I didn't go; however, the next day while walking my dog I saw they had a small table out on the curb for garbage pick up. So I knocked on their door and asked if I could take it. They said sure, so I came back with my truck and picked it up.

The table was missing some hardware for connecting the legs. It was also kind of beat looking. Someone had painted a it white...  poorly...  then they got it dirty and the paint scratched and chipped.

I bought some paint stripper got it home, then re-read the safety instructions and then decided I didn't want to use a chemical stripper. I used several 60 grit sandpaper disks on my random orbit sander to strip all the paint. It took a couple of hours but I got all the paint off. Once I was down to raw wood the table was super unimpressive looking. Better than a dirty bad paint job but still pretty ugly. 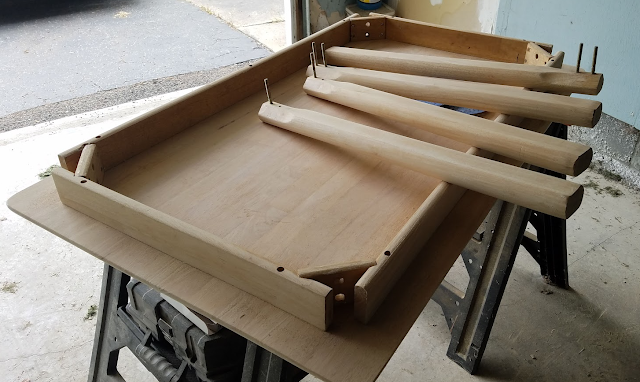 This table was destined for a friend who holds a party every 4th of July. We'll refer to him as Andy to protect his identity. I took cleaning up the table as a spring project. I thought this a perfect opportunity to try some things I don't really do that often. I decided to stain the top a dark brown and my idea for the legs was a dark green. Came out okay I think. 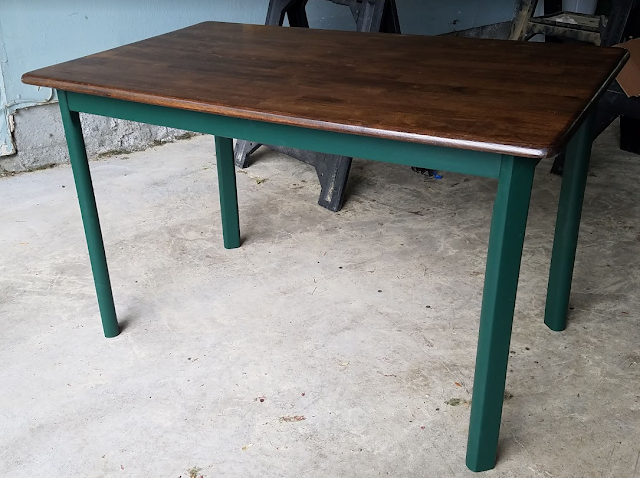 It looks even better in someone else's game room basement.

Mid summer my wife and I were given the opportunity to choose whether we wanted to continue working 100% remote, 100% in office or a hybrid schedule. We both chose to work 100% remote.

I've been working on an old office desk and have been gradually tweaking it to make it more suitable for working at. My wife has been working on her old student desk. It was small, maybe 2ft x 4ft. Barely big enough to hold her laptop and a single monitor. She asked for something custom.

Since I know my woodworking isn't fast I decided to get her something much better quickly. The quickest way to getting her a 3ft x 6ft desktop was to buy a solid beech workbench top. It's massive. It weighs 100 lbs.

I bought it from Grangier's on an internet sale. The first one I picked up had a really bad cup and I had to return it. While it was a pain picking up, returning, and then picking up a replacement they handled it very well. I'd shop there again. The second benchtop was as flat as I could test for.

Coming off fixing up the little table for my friend I decided to make the legs the same way. 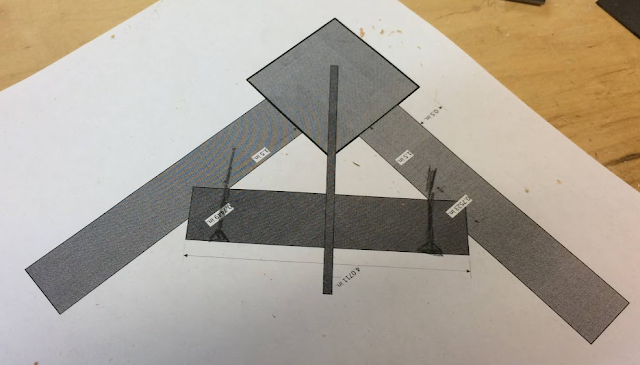 It's basically some hanger bolts that pull the leg up against the skirts. I have to admit when I started this I was thinking of it as a cheap mass manufacturing way to build a table. After I worked with the joint a bit I gained a new respect for it. It's very strong, it breaks down easily, and it is very forgiving. If your measurements are off even a fair bit everything will still go together fairly well.

Anyway, we polyurethaned the top and painted the legs. My wife wanted a keyboard tray so I added one of those too. 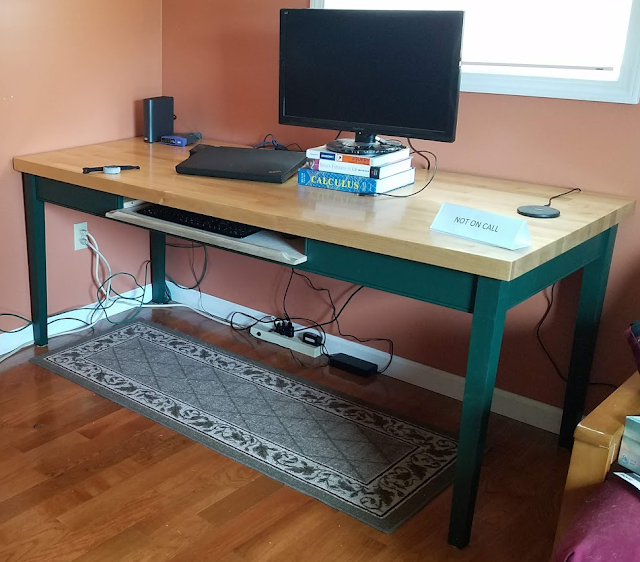 She wanted a couple of monitor stands that were Calculus, jQuery, and C# Design Patterns high. One of her friends quipped that that was the best use for a Calculus book she'd ever seen. So, not in place but I created a couple of wood boxes with smaller boxes inside as drawers. 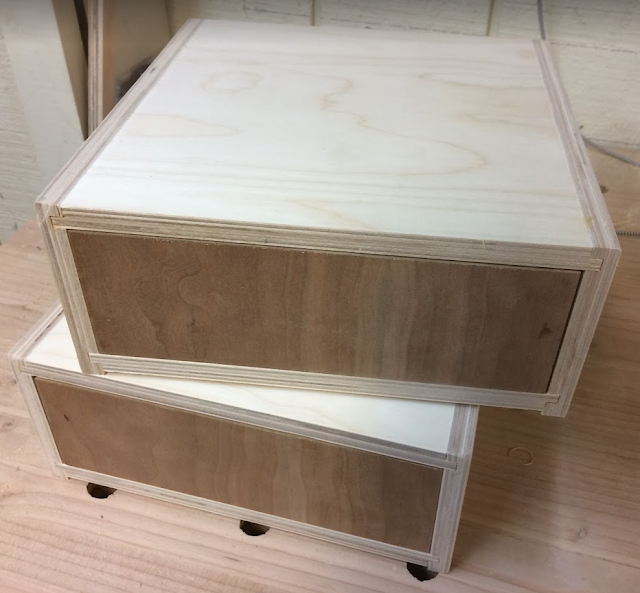 I built a cat wall. Okay, it's more of a cat playground and it isn't finished. 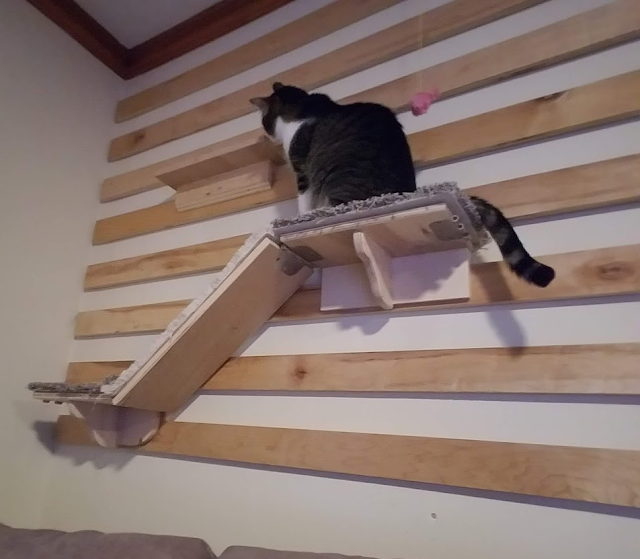 I attached a whole bunch of French cleats to the wall in our family room. The idea is to build a bunch of platforms and cubbies the cats can climb in and through. When they get bored I can rearrange the wall to make it new and interesting. The ramps are attached to the platforms with hinges so I they come apart and I can rearrange them in different shapes.

This is all I have so far but I'll make some more this winter.

Well, I got free wood. I was at a summer picnic and struck up a conversation with a coworker. We'll call him Dan to protect his identity. Turns out Dan was an ex-woodworker, was moving, and had gotten rid of all his stuff excepting about 100 bd ft of soft maple. He offered it to me for free. So I got the trailer out, unfolded and drove over to his house and picked it up.
I've got ideas for using it this winter to build a bookshelf but I need to go through it to see if I am going to be able to get what I need out of it. 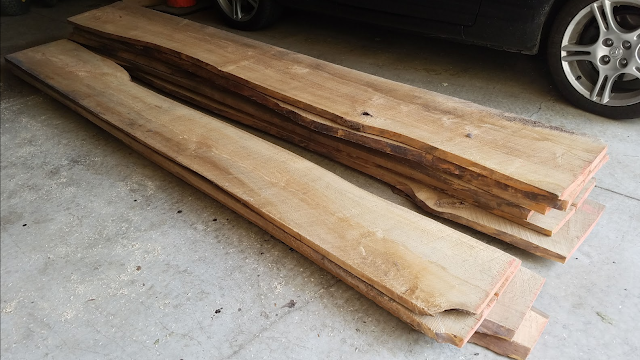 I visited my parents in Chicago... 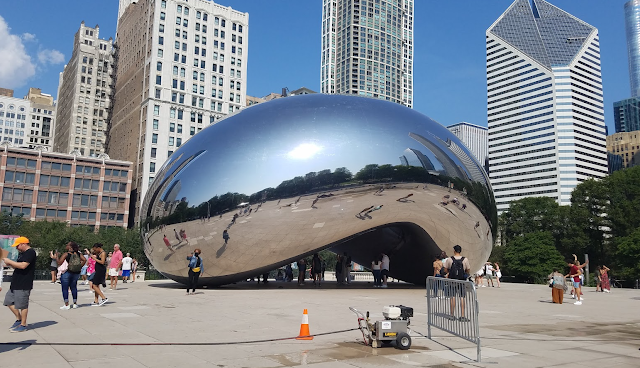 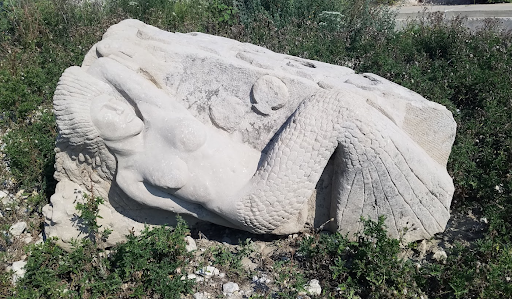 Heimdall is a pest 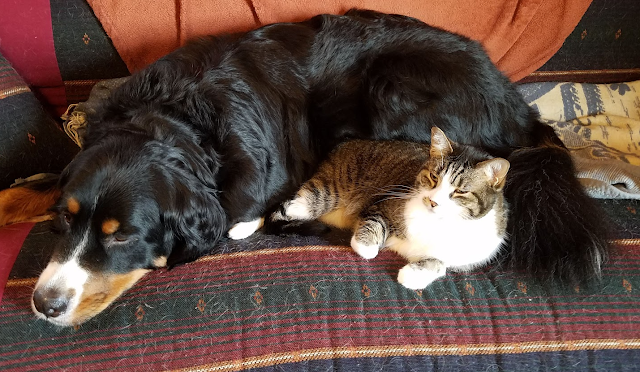 Wow, just realized that workbenches were the alpha and the omega of this post. Well, my wife and I decided to get 3d printers. We bought good quality but intro versions She got a resin printer to support her painting hobby. I got an FDM because I mostly want mine for making jigs and templates. I don't need a delicate high quality finish. To hold the printers we bought another smaller solid beech bench top and stuck some legs I built out of poplar and luan plywood. We painted the legs with leftover paint we had lying around. 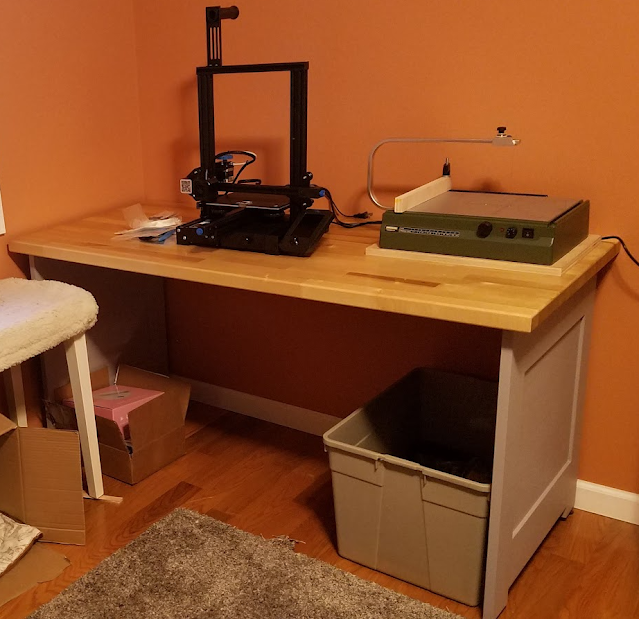 That's my Crealty Ender 3 V2 and her Proxon hot wire foam cutter. My printer has been moved to another room where it can run without disturbing anyone but the bench hasn't moved. I added foot levelers to the legs to make sure the top was level as well as flat. I'm currently working on light duty rolling cabinets to put underneath but they are still a work in progress.

It was a pretty busy summer. I didn't do any large projects but I did get a bunch of medium sized projects done. I'm hoping to build a nice bookshelf for my office this winter as well as do some more smaller projects to make our offices "better".

Posted by Felix Enterprises at 6:59 PM