I was introduced to Kubb this summer at a company picnic.

Kubb is a Swedish yard game that involve throwing sticks at blocks of wood. There are actually nation championships with official rules; however, the "sport" is new enough that there is a lot of variation. For example, the regulation size field is variable as is the size and weight of the game components. If you are detail oriented like I am this could cause you a conniption fit; however, taken another way you can see that this allows you a lot of flexibility to make your own version of the game and no one can tell you you are wrong.

I took my kubb set dimensions from the USA National Championship rules. This is also a good place to get a set of rules. 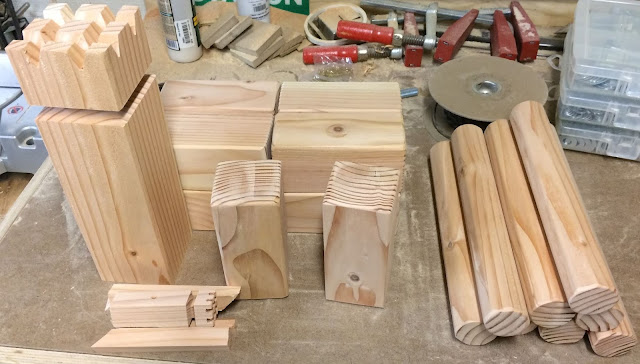 The USA National Championship rules specify a weight and not a wood species. I made some samples our of fir and found that they were the right weight so I made mine out of a couple fir 4x4s.

It's right about now you are asking yourself, why do I need instructions on how to make rectangular blocks of wood?

I used two and a half 4x4s to make two sets. I'm going to give one away as a gift and keep the other one for myself. The side benefit is that by making two sets I am able to sort the pieces into a better set and a "worse" set. By worse I mean pieces that were slightly miss cut or that have a lot of sap in them.

Typically you'd think I'd give away the better set but since I'm most likely going to be giving the gift set away in a white elephant exchange where even the poorer set will be far better than what anyone else brings I feel it is appropriate.

Anyway, because I don't have any metric measuring devices I started by converting the metric into imperial units. This gave me the following dimensions:

My next step was to make the batons. I took a few of the blanks I'd cleaned up and split them into quarters using my table saw. This resulted in batons that are around 2-5/8" diameter vs 2-3/4" but, "Hey, it's just a yard game. You're probably going to play it with a beer in your off-hand." I was able to use some of the lengths of 4x4 that had blemishes. When I quartered them I just tossed the parts that were a little too rough.

I wanted to make mine round but I don't have a lathe nor do I have a round over bit that's 2.2 cm radius. I decided to make a jig that would allow me to rotate a square blank over a router bit in my router table. With the square blank a consistent distance from the table the blank would end up round.

Suffice it to say it didn't work. The holes I cut to rotate the blank in were not tight enough so the blank slipped a little. Also, I should have trimmed the corners to make an octagon so the router would be removing less waste. In the end it seemed like a lot of work to get a mostly round blank that would still need  more clean up.

I thought about using a hand plane to round the batons but then I figured I'd try first clipping the corners to make octagons. They felt pretty good so I use my stationary belt sander to smooth out the faces and round the sharp corners. This is my concession to, "Hey, it's just a yard game. You're probably going to play it with a beer in your off-hand." After clipping the corners and sanding them I used my table saw sled to trim one end of each baton and then cut them to length.

I left the kings for last because I had cut some extra blanks and since the kings are bigger I could always cut them down to the smaller size if I needed to replace a kubb or baton blank.

When jointing and planing the king blanks I kept them as big as possible. They came pretty close to the 9 cm size. I cut the crow in the top by setting my left-tilt table saw blade to 22-1/2 degrees and my fence to 5/8". The top of the blade was also 5/8" above the table. To cut the crown I really should have used a tenoning jig; however, I just held the blank near the top and was careful to not let the king bind. I then readjusted the fence so that I'd finish the cut for the crowns. I got my alignment by setting the king against the fence and looked through the initial cut to make sure the blade was lined up.

To cut the neck around the crown I left the blade setup the same. I used my fence and a miter gauge to make the initial cut. To get the second cut I had to move the miter gauge to the right hand slot and use a stop block; however, I aligned the cuts the same was as I did for the crown by sighting down the initial cut to see the saw blade.

With all the parts cut I used my stationary belt sander to smooth out all the faces and soften all the corners and edges. This took a while as with two sets I had ten batons, twenty kubbs and two kings.

Out of the scraps I did make stakes to outline the playing field and a miniature king. My plan is to use some paracord to form a triangle that outlines half the playing field. The triangle hypotenuse would have the king tied in the middle and would be the diagonal across the field. The two sides of the right triangle would form one sideline and base line. The lines could then be picked up and flipped around to form the other sideline and baseline. The king marker would also mark where the full sized king would go. I also thought making a little small scale king would be fun. 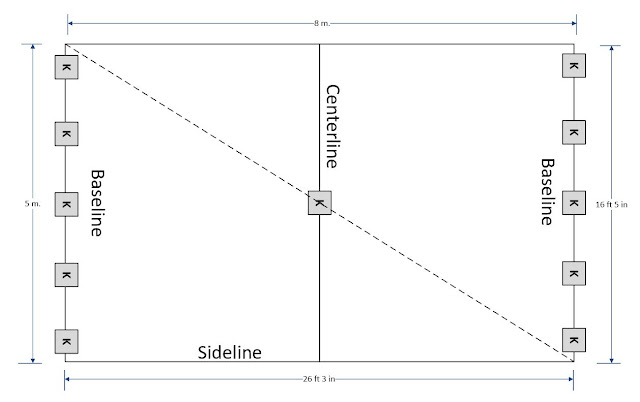 My sets took me about a day to get through it all. I did it over several sessions so I'm not exactly sure how long it took; however, about a full workshop day seems about right. Why so long? Well, there was a lot of sanding of a lot of parts. I didn't even sand them to a super fine finish. I mostly just tried taking the sharp corners off of everything.

Would I do it again? Maybe...  but I have a set now so I don't really have a reason to do it again. Would I recommend someone else make their own set? That's more complicated. I've seen sets on etsy sell for as much as $170 USD. I've also seen them sold on other websites for as little as $30. My sets cost me about $15 each but taking in the day or so of effort I don't know if I really saved anything. I guess if you are looking for a project that doesn't require a lot of fiddly precision or you want to give it as a gift and want the personal touch it isn't a bad project. If you are looking to save money, just go buy an inexpensive set on Amazon.

Posted by Felix Enterprises at 5:37 PM