Let's do the Covid update...  New York State is doing fine. Our infection rate across the state is between 1% and 2% fluctuating by the day and week. We're still not fully reopened; however, on the rare occasion I've been out of the house you wouldn't be able to tell that we were all practicing safe distancing by the number of cars on the road. After all, they must all be going somewhere.

I had to go to Home Depot to pick up a wax ring for one of my toilets that started leaking. I figured if I had to be there anyway I may as well pick up some other supplies that have been on my list. Apparently everyone else also thought Friday afternoon at 4p was the time to go buy paint too. Well, other than an older woman who didn't understand distancing it all worked out okay. At least so far...

Anyway, I've been putting my standard wipe on polyurethane on my Gaming Console Console. It's been going a bit slowly because we had about four or six days of 90 degree F weather and at best I could sometimes put a coat on in the morning before work. Even then there were some mornings I skipped it due to the heat and humidity.

Even with the hot weather I was able to finish the polyurethane on my case, door, drawer fronts, and shelves. The last - sort of - step is to get some polyurethane on the case back and then assemble. I say it is sort of the last step because I still need to get some glass for the door and then put it in with some glass stops I haven't milled yet. I'm still waffling on whether to go with glass or frosted plexi-glass.

Over the weekend I only put a few hours into the workshop. It's summer and we had a couple of beautiful days to spend outside. Well, we got some rain too but the weather cooled down to bearable temperatures. What I did spend time on this weekend was some shop cleaning and trying to get some of the small projects that built up out of the way, or at least moved forward.

Remember the hobby storage cabinet I made for my wife? The plan was to put some 1/4 inch hardwood veneer on the trays and 3/4 inch hardwood false fronts on the bottom drawers. Aren't they all drawers? Sure, in a way. But I have drawer slides on the bottom two and the top eight are just loose fit and sit on a shelf. It's also convenient to distinguish between the two types by calling them drawers and trays. The trays are also a lot shallower.

Anyway, I finished ripping my red oak into 3/8 inch panels and planed them down to about 1/4 inch and sanded them to 80 grit. Next I needed to mill 3x5 card holder slots. The current trays have 3x5 cards clipped to them using a binder clip. It's unattractive and wont work after I add the 1/4 inch oak. So, the idea was to cut out a window slightly smaller than 3x5, then route out space on the back of the veneer to slide the card into.

I made a template. 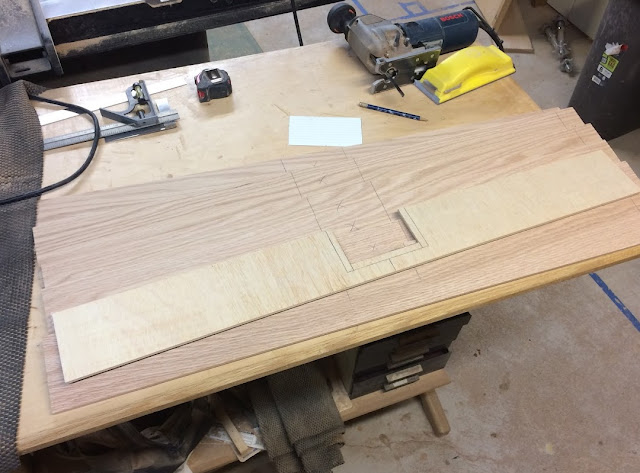 I used this to trace out the window shape that I then cut out using my jigsaw and band saw. I used both tools because my jigsaw set up enough vibration in the thin veneer that it was causing the oak to splinter and break. So I used the jigsaw to make the vertical cuts and the band saw to clean out the waste at the bottom. I then used a rabbeting bit to clean out the card slot on the back of the veneer.

Then it was just a matter of sanding up through 180 grit with my random orbit sander and rounding over the square edges with my sanding block.

Since the cabinet is fully loaded we just emptied two trays, a 4 inch and a 6 inch which I added the veneer to and then while I was putting polyurethane on the gaming console console I also put some on the veneer. I didn't bother putting poly on the actual trays.

So, two trays are now done and I have another 4 inch and 6 inch tray in the workshop ready to have veneer applied to the front. I've also glued up two 3/4 inch thick panels to turn into fronts for the drawers. I really like the look of the two poplar drawer handles I made but I think I'll probably make two new ones out of red oak so they match. Or maybe I'll make them out of a contrasting wood like walnut if I still have any.

The other thing I worked on over the last two weeks were some cup holders for a friend's table. He has one of those gaming tables with a removable lid that has a channel along the skirt that accessories can be locked into. What I was working on this last week was making the slot to hold a peg that is used to lock the holder in place. I've had this project in progress for much of the last six months to a year. Time to get them finished.

This coming weekend? Glass in the gaming console console door and mounting it in place. Finish those cup holders for my friend. More tray and drawer fronts for the hobby supply cabinet.

The Gaming Console Console is almost done. Hopefully it'll all be done this week.
Posted by Felix Enterprises at 2:08 PM