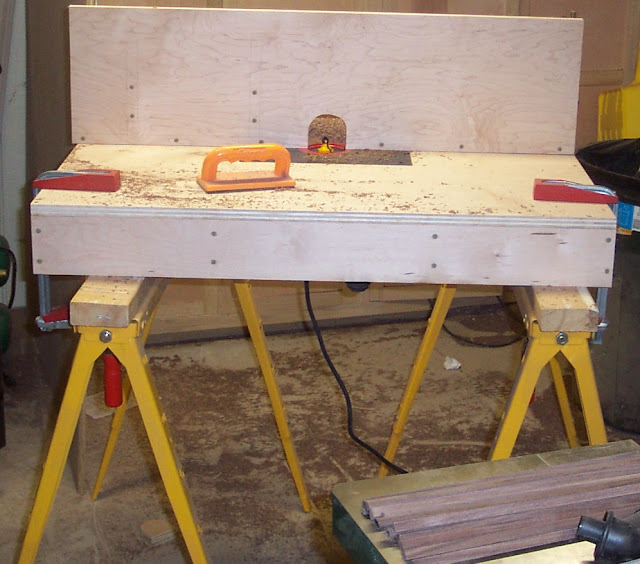 I built this router table in an evening about ten years ago. I needed a router table for a project (I don't remember which one) and I needed it quick. The quickest and easiest router table is to drill a hole in a sheet of plywood and attach the router directly to it. I decided to go one step up.

My router table is effectively built from a half sheet of 3/4" plywood. The main table has a plywood skirt and then to prevent sagging I added a couple more gussets across the middle. 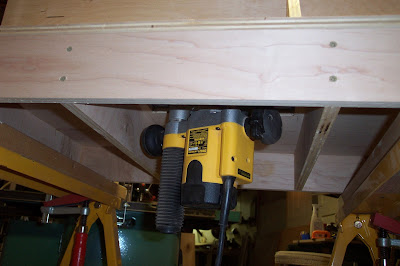 That's my old 2 HP Dewalt router. It served me well for a number of year but then fell prey to wood chips getting into the motor and messing up the spindle (or some such thing). It still works but it makes a horrible grinding noise. I've since replaced it with a 3 HP Porter Cable router. I went with the bigger router because I wanted to be able to use large panel raising bits. I haven't done that yet but I could if I wanted to.

The fence is also pretty basic. It is essentially two pieces of plywood with more plywood keeping the back stiff. 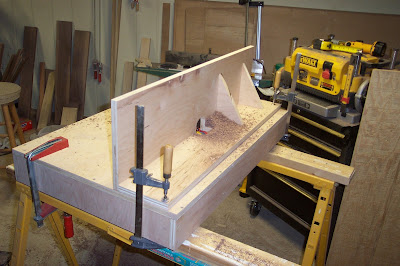 I don't remember why I started with only two supports. I think I may have run out of screws. Those two supports were made from the router plate cut out. Very thrifty if I do say so myself.

As you can see from the picture I just use a couple of clamps to hold the fence in place. If I need to nudge the fence I just loosen one of the clamps, give the fence a bump with the heel of my hand and then clamp it down again. Again, not too fancy but it works. 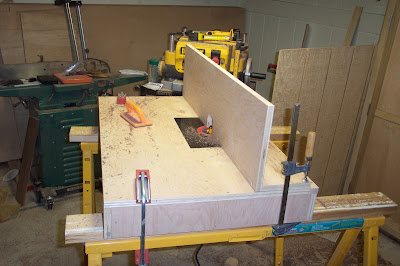 I've got the box setup on sawhorses for the picture and that's pretty much how it is today. It has moved to a different spot in my shop but is essentially the same. My thought originally was that I would be able to set it up and take it down as needed to keep the space available. Practically speaking it will probably take up about as much space  not on the saw horses as on them. I also had this vision that I would be able to take the router table on the road if needed. So far the need hasn't happened yet.

My plan was - and still is - to build an official router table. Maybe this fall. Until then this table will keep serving my needs.

Posted by Felix Enterprises at 7:05 PM