I've been getting and reading woodworking magazines for about fifteen years now. To be honest I read them for the first twelve or thirteen years and then I had a hiatus of a few years while I also wasn't doing a lot of woodworking. I periodically go through my already read magazines and index them. Basically any article or project that caught my eye gets put into a spreadsheet so that I can easily find it later.

After I index the articles I care about out of a magazine I put into into a Magazine File Storage box and put it into my library. Unfortunately I've built up quite a backlog of magazines I haven't indexed yet in addition to the ones I haven't read. About six years worth. Over the last couple of weeks I've gone through all the magazines I've read but not indexed and added them to my spreadsheet. I've got a couple of cardboard magazine storage boxes but I prefer the wooden ones I make from a plan I got a number of years ago.

Whenever I want to work on a project I'll make a photocopy and work from that to keep my magazines nice.  Since I'd made these magazine boxes I already had a photocopy and I knew I'd just seen them in my workshop. And thus began the search for the plans.

First I scoured my workshop. They weren't there.

Then I checked to see if I'd brought them upstairs to read. Nope, not there either.

Maybe they were in the workshop, maybe if I did a more thorough search. Nope, certainly not there.

Well, they had to come out of one of my magazines. Maybe they were in my index. Nope, nothing in my index?

Gah! I may also have uttered - or shouted - some profanity at this point.

Fortunately I had templates left from the first batch I'd made hanging on my wall. I remembered enough of how they were constructed, plus the ones I already had, plus the templates I should be able to replicate the plans. They really are pretty simple.

I found one magazine storage box plan but not the one I was looking for. If it weren't for the full-sized templates I would have thought I was crazy. I must admit I did entertain the thoughts that crazy was an option for awhile.

I usually prefer an elegant approach to problem solving; however, at some point brute force is the most elegant option available. I figured I'd just pull my magazine boxes with Wood Magazines and go through them looking for the plans. I pulled down two boxes and went through all of them and guess what? No plans!!!!

Gah! I may have doubled down on my soft utterances  of profanity.

My afternoon was slipping away. I'd planned on being at the lumber store hours ago and I still didn't have my plans. Then while I was preparing to just go ahead and go buy the lumber I wanted I saw another few boxes of magazines on my science fiction bookshelf. Hooray!

At last, at last! I found my magazine with the plans. It was in Wood Magazine, Issue 193, October 2009, the third from the end. Hooray!

I made a quick run to the lumber store to pick up some maple for the magazine box sides then cleaned up for dinner with friends.

Starting with the Sides

I started by cutting my maple boards into 13" lengths. I then straightened one side on my jointer then since my band saw's maximum height is 6" I ripped them down to 6" or slightly less. 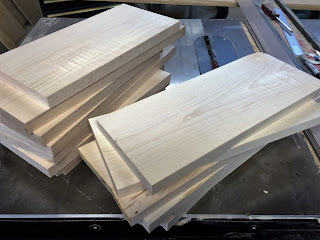 I have had mixed results from resawing boards in the past but these went pretty well. I started by setting up the saw by mounting a 3/4 inch blade. I also added my resaw fence which is basically a tall point fence that allows me to change the angle of the board so that I can counter blade drift. 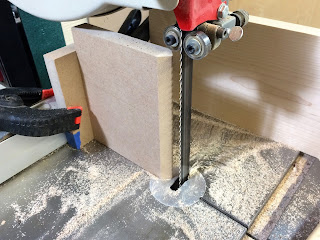 The board sitting crosswise in the back is just there to hide the background clutter. This is what it looks like when resawing. 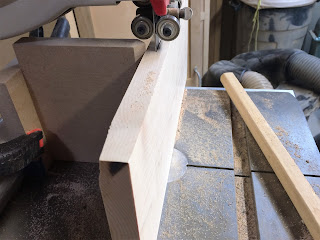 I spent a few hours resawing the boards. and ended up with a bunch of thinner boards. 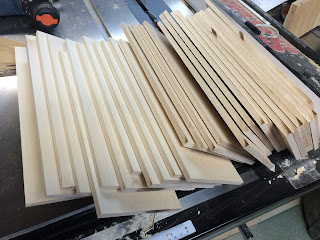 Inevitably the boards warped as they were cut but not too badly. The next step was to pass them over the jointer to remove the blade marks and make the boards flat again, at least on one face. Once one face was flat I glued them up to make the blanks for the sides. 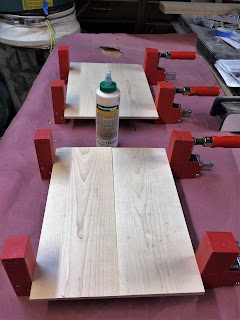 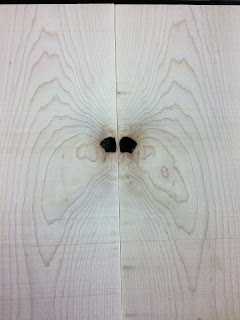 The picture on the right shows some of the cool things you get when you resaw a board. This is called bookmatching. After resawing the board you open it like a book and you get a mirrored grain pattern. I actually glued these two boards together on the other side so I could avoid the knot holes; however, this picture shows the bookmatching effect very well.

Since I didn't feel like using 40" clamps to glue two smallish boards together I had a fair bit of time while waiting for my glue to dry two sides at a time. I used this time to dig through my stack of off-cuts and other boards I'd bought special for this purpose and selected enough to make fronts, bottoms and backs for all the sides I was gluing together. 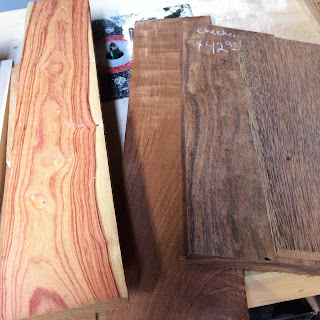 The next step is to shape the sides, cut the fronts, bottoms and backs to size, cut some dados and rabbets and then glue it all together. Simple, right?
Posted by Felix Enterprises at 6:00 PM