It's the end of the weekend and while I didn't make quite as much progress as I'd hoped I did pretty good.

I spent Saturday prepping the work area. This entailed

That's a lot of bullets but it only took me four hours or so to get all that done. It left me in a good spot to hit the ground running when my friend came over to help raise walls Sunday morning.

Let me say that working with 'John' was great. We got done in three hours what would probably have taken me a couple of days. Having someone who knows what needs to be done who can work independently is awesome. While I was cutting the sole and top plate to length he'd be bringing over more 2x4 studs. While I was cutting  the studs to length he'd be laying out the locations of the studs on the floor and ceiling plate. I know John knows how to use all the tools in my shop properly and safely.

We started the day by going over my plans and getting John's approval. Okay...  I didn't really need his approval but since he's worked in construction previously and has a lot of experience I'd be a fool not to seek his opinion. And while my 'fool' status may be debatable, I do believe strongly in relying on other people who have more experience than I do. The basic plan was to:
John approved of my plan so the first thing we did was cut out the existing top and sole plates where the closet was going. I learned something new: using a circular saw over your head is annoying. All the sawdust falls in your face. Next time I'll use my sawzall.

With the sole plate out of the way we were able to pull my dust collector into the opening and double check my measurements. And, it is a good thing we did. I'd based my measurements off the base - partly because it was easier - but the dust collector is a bit wider in the middle than it is at the bottom. Simple enough to add a few inches to make sure it'll fit.

We started the construction by building the short wall extending the existing wall. It was a great place to start because it was small and quick to do and we were able to get used to working with each other again. Since the existing wall didn't end with a stud we had to add a couple scabs to fill the gap and give us something to screw to.

The longer wall has some complications. Mostly that pesky post needed to be worked around. Fortunately with some careful measuring and thinking we decided we could just notch the bottom and top plates and surround the post with studs. I made the notches with my jigsaw The rest of the wall was pretty standard.

After getting the two side walls built we built the back wall to fit between then added some framing around where I am going to build a door. 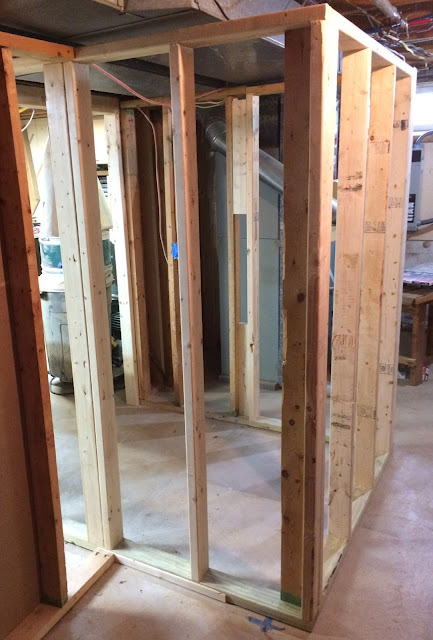 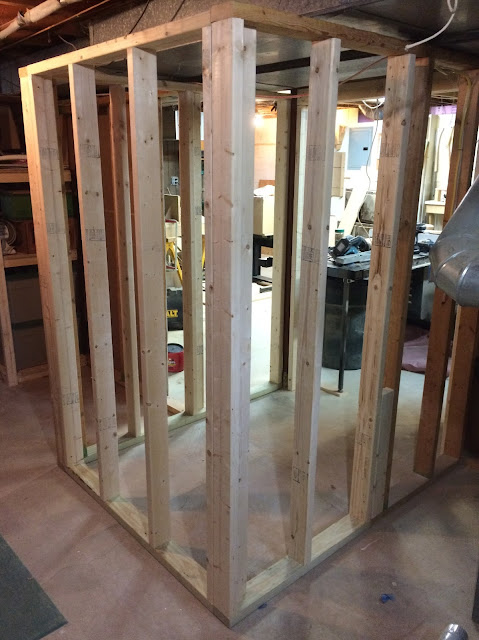 The doorway header is a pair of 2x4s with some 1/2" plywood to make it 3.5" wide. It's wedged between the existing wall and the post pretty tightly but I added 2x4 trimmers to make sure it stayed up. Yes it is a pretty lightweight header but it isn't supporting anything so it should be fine. Mostly it is just going to hold up some plywood to cover the I-beam..

There are a couple of pieces of plywood holding the rightmost trimmer in place. I'll probably toenail a couple of screws later but the T1-11 plywood I'll add around the doorway should be sufficient to hold everything in place. 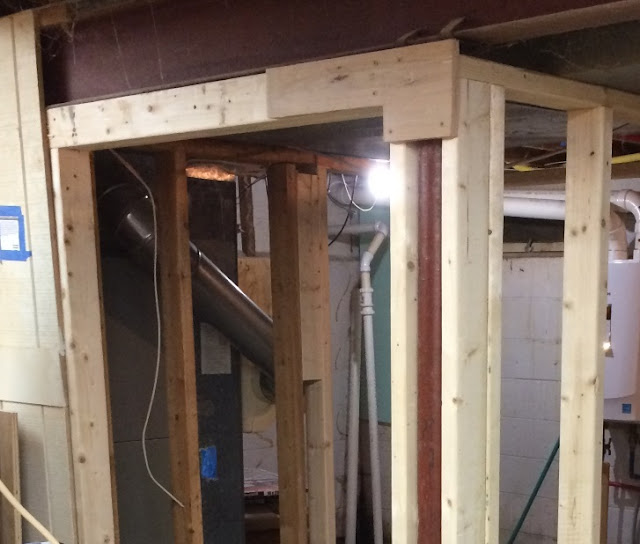 I had planed to put T1-11 siding on the walls but John suggested using drywall as it will slow the spread of fire if somehow I get a fire started in my dust collector. I didn't want to use drywall but mold resistant blue-board will work. I didn't want drywall in my shop because I'm hard on the walls but the closet will be protected from dings. John helped me out again by helping me pick up some blue-board before heading home for the day.

I still need to figure out how to put the ceiling in since I didn't really leave room for joists. I'm sure I'll come up with something.

Posted by Felix Enterprises at 6:26 PM