I had a couple of hours tonight so I figured I'd get started on putting up the blue board.

Before I get any further let me say that I am horrible at drywall. I've done a little patching around the house and it all ended up looking okay but my technique is to make the patch, add mud, sand, ad more mud, sand, add more mud, sand, ad even more mud, sand... It all looks okay when I'm done but I'm no professional. Heck, I think when it comes to drywall I'm not even an amateur. Just keep that in mind...

My walls are 76" high, the side walls are about 60" long and the back wall is 48-1/2" wide. I took a couple of minutes to figure out how to most efficiently use 4 sheets to cover the walls.

The pros tend to put drywall on horizontally, probably partly because they are covering longer walls and they can use 12' sheets that way. Unfortunately I didn't come up with a way to make that work out without having to cut a lot of niggling little pieces so I decided to put my sheets in vertically.

I put the first sheet on the left hand wall from the perspective of the doorway. It was a little tricky getting the sheet in but with a little effort and twisting I managed to get it into place. I also needed to cut a hole for the power outlet which I did after I mostly had it in place. To start the hole I used a spade bit and finished it with my drywall saw. 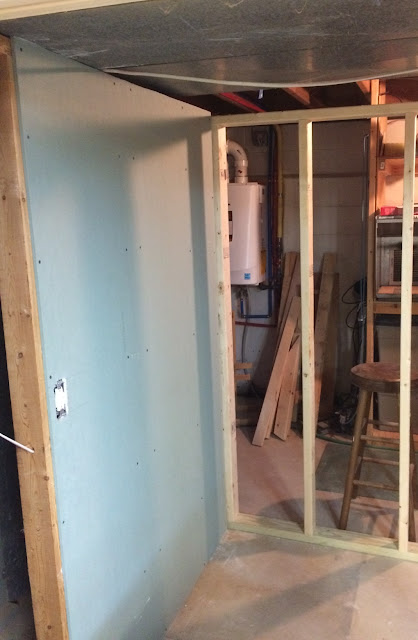 That went relatively smoothly so I figured I could get another one done before having to make dinner. Unfortunately I'd just barely managed to get the first piece of drywall into the closet and had to use the opening between studs that was now covered up. I fussed with it for a bit then decided it would be easier to just take the back wall off.

I think I forgot to mention this earlier but the entire closet is screwed rather than nailed. I have nails, I have hammers; however, I also have a sore elbow and tendinitis in both wrists. I figured it was a small enough project that using deck screws wouldn't add significantly to the project costs. It worked out in my favor when I needed to remove the back. Six screws, three per side...  zip-zip and the back came off. 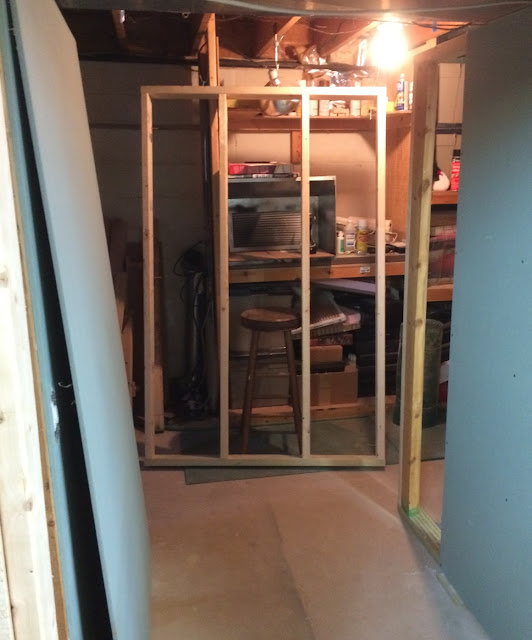 Then I remembered that I needed to trim the next piece to 46-1/2" wide rather than use the standard 48". The right hand wall doesn't  have a stud in exactly the right place. When John laid it out he didn't anticipate the post shifting the leading edge of the drywall back. No worries, I left that piece in place to use on the back wall and went and cut another to fit the side wall.

With the last two large pieces of drywall in I reattached the back wall and fastened the two pieces in place. 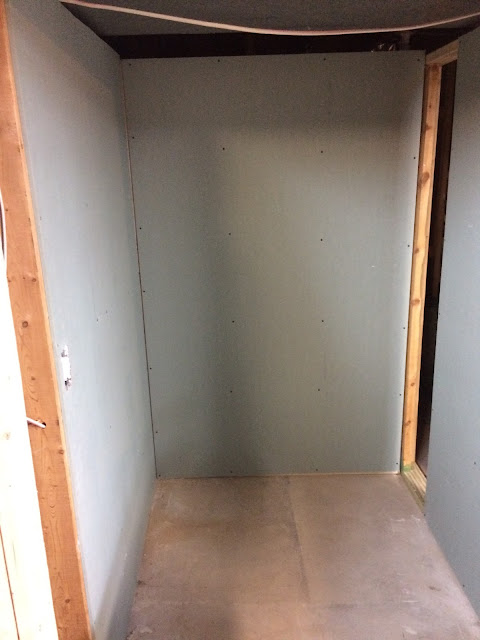 That's as far as I got before it was time to eat dinner. Tomorrow night I'll use the off-cuts to patch the remaining gaps and cut the piece for the ceiling. If I get lucky I'll have time to add the framing for the ceiling as well. We shall see.
Posted by Felix Enterprises at 7:08 PM