It's raining... Nearby towns are flooding; however, I live on top of a hill. Since it was nasty out I had a little bit of time this afternoon so I figured I'd start tackling the cabinets. I know I'd started looking at them last weekend but I hadn't checked inside the cabinets. Turns out the middle two doors of four are part of a single cabinet. The new wall will be going right through the middle.

This isn't too big of a deal. I was going to pull all the cabinets anyway. I'll just have to do more reconfiguration than I was planning. Or perhaps I'll build something custom in their place.

I started by emptying the cabinets. Prior to condensing my shop the cabinets hadn't seen much use; however, after cleaning out the small shop I pretty much filled them up. The upper cabinets held pieces of unfinished - uh, in progress - projects. The lower cabinets had scrap hardwood that I'd thought to be worth keeping. I didn't get rid of anything in this move. I mostly just moved the contents to other cabinets or piled on top of my workbench.

Since I want to reuse the cabinets I wanted to take them apart gently. No sawzall or sledge hammer!

I crawled around inside the cabinets to figure out how the previous home owner had put them together. It took me a couple of minute but I finally spotted where he'd put screws through the frame into the top. In some cases the screws were hidden inside, sometimes they were just straight through the front upper rail. I got all the screws I could find but there was still something still holding the front down.

Turns out there was one sneaky screw I hadn't found. Unfortunately the screw was in a drawer opening where my table saw impinged the drawer preventing it from opening fully. The table saw weighs 600 lbs so moving it isn't really an option. I briefly thought about using a sledge hammer and smashing the drawer out. They're pretty cheap drawers and I wouldn't mind rebuilding them if I reuse the cabinets; but instead, I pulled out the sawzall and cut the screw off with a metal cutting blade. There are other ways I could have accomplished this tasks but this was pretty quick and easy. I love my sawzall. It is probably one of the least used tools in my shop but when it comes to tasks like these it's invaluable.

So okay, maybe a little sawzall.


After getting the last screw it was just  matter of noticing that there was caulk along the back edge and scoring it so the top could be pulled off.

That's where I left it as I had to finish cooking dinner. 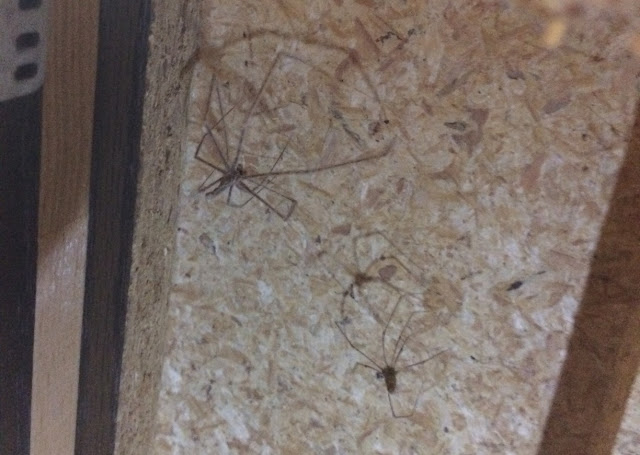 In any case, unless there are surprises it'll just a couple more screws holding the cabinets to the wall and I can finish pulling them out.
Posted by Felix Enterprises at 6:52 PM