Well, it is done. Monday evening I didn't get any time in the shop but Tuesday evening I had a couple of hours after work to glue the cases together. 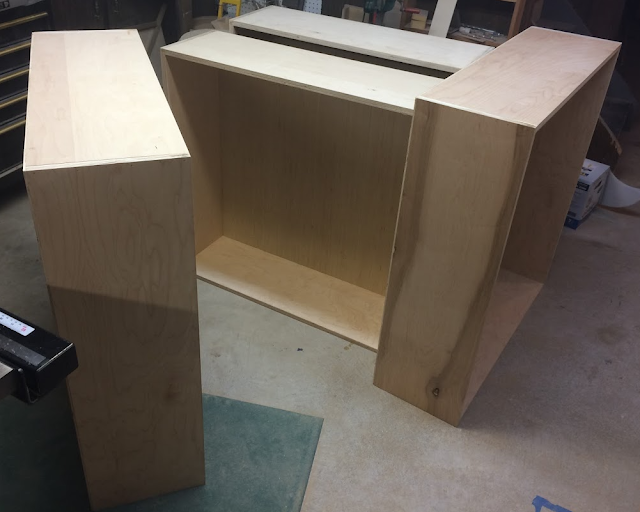 I started with one side, added some glue to the dados in that side then added the bottom/top and nailed them in place with my 18 gauge nailer. The cases were too large to keep on my outfeed / assembly table so I transferred the assembly to the floor with the top / bottom pointing upwards. I was then able to add glue to the dados in the opposite side then flip it over and add it to the assembly.
I moved the assembly back up to my assembly table and checked to make sure my joints were tight. Moving the assembly from the table to the floor and back to the table did loosen a couple so I pulled them tight with a clamp and shot a few more nails into those.
Then it was just a matter of putting a thin bead of glue around the back edges and dropping the 1/4" luan onto the backs. I swapped 1/4" crown 1/2" staples for the nails in my nailer / stapler and tacked the back down with those. Glue squeeze out was cleaned up with my finger, a damp rag, and just left depending on how much glue there was and how visible it was going to be later.
Then I set the case aside as seen in the above photo and did the next one.
With the cases assembled I was able to get an accurate final measurement for the shelves. I set on of them in place and with a couple of test cuts got the fence set to crosscut the shelves. I used the same technique as I used on the sides and top / bottom, using my miter gauge with an extension to keep the board perpendicular to the blade.

The last step before assembling the shelves into the cases was drilling pocket hole screws in the ends. I thought about quitting for the evening but I really want to get this project done. It went a lot quicker than I thought it would. Maybe 45 minutes? 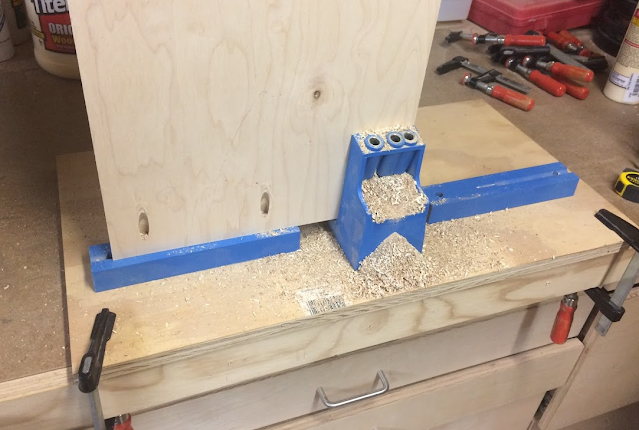 Then it was dinner time: Kielbasa and Pierogis. Yum...
I had after dinner plans but since one of my friends was stuck at work we cancelled. (And yes, it was an on-line event). So, (minus one Toastmaster point for starting a sentence with 'so') since my cases had had sufficient time for the glue to get to it's initial set period I carried them upstairs and put them into the closet. 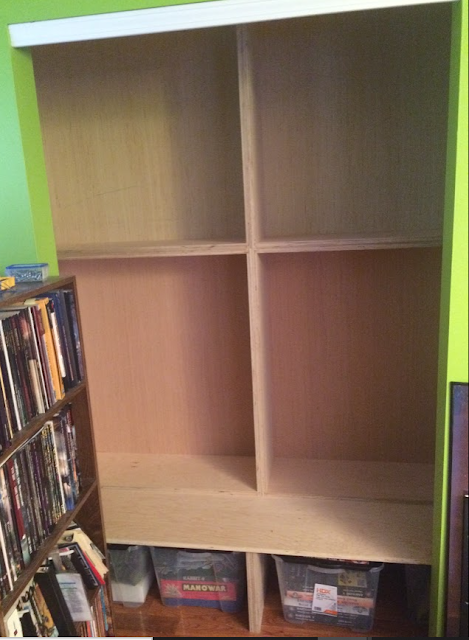 I carried all four boxes upstairs before adding them to the closet. I have to admit some nervousness that despite all my careful measuring and re-measuring (measure 20 times, cut once) that as I was sliding the second lower box in place that they might not fit. Fortunately, all my careful measuring worked out - and I didn't make any math errors. The second bottom box slipped into place and I have my planned 1" buffer (1/2" on each side).
I was greatly reassured; however, then I got nervous again as I went to add the first upper case. I realized as I was lifting it into place that the lightbar that is on the inside of the closet was in the way. <sigh> It protrudes into the front plane where I was planning on lifting the boxes into. I was able to get the box in place by tilting the box into the back plane. It was a little awkward lifting the box. The box probably only weighs 40 lbs or so but it was large and needed medium-fine manipulation to get into place.
The second upper box was even more awkward as I had even less space in the closet to maneuver in. Regardless it wasn't too bad and actually ended up going easier than the first upper case. I was saved by having left a whole 1" buffer along the top of the shelves. I often get in trouble by cutting my margins too close but I was careful to not make that mistake with this cabinet. It would be nice to have that volume available for storage but it was more important to not have to rebuild the shelf boxes because they didn't fit.
Anyway, the shelves are still in the workshop and need to be brought up and installed in the cases. Before that I need to screw fasten the shelf boxes together to make sure they don't shift; though, they are heavy enough I don't think that's a huge worry. I am getting a little worried now that I didn't put enough screws into the cleats holding everything up. I may go back and reinforce those.
That's another day though.
Posted by Felix Enterprises at 5:32 AM