Instead of working on my bench I took a trip to Lowes on Saturday. I wanted to pick up some plywood for my next super secret project. And there started my plywood adventure. For some reason I'd thought that I could fit 4' wide plywood into my Forrester. I don't know how that made it into my head. My cargo area is actually closer to 3' x 5'.

The reason this is relevant is that I had thought I could just cross cut all my plywood once and fit it into the back of my truck. I've had bad luck relying on the resawing services from big box stores before so I'd brought along my cordless circular saw, straight edge guide, and a spare battery. I went to cross cut the first piece of plywood and realized that my battery wasn't just low, it was empty. Fortunately I had the spare. It was only after I cross cut my first piece of plywood then realized I was going to have to double the number of cuts. I admit I was a little nervous because my second battery wasn't full.

Turns out my battery made it through about half the cuts I needed to make. I looked at my pieces of plywood and started calculating the cost of just abandoning them in the parking lot. Instead I took the walk of shame and took my plywood back into the store and got some very helpful workers there to cut my plywood down for me.

Then the only problem was having a tall stack of plywood in the back of the truck and no tiedowns to keep it from crashing around. I drove home super carefully and had no problem; however, it was just kind of the icing on the cake of bad decisions.

That was most of my Saturday as well as a fair bit of sitting on the couch.

Sunday I went over to a friend's house. We'll call him Dave to help protect his identity. He's a beginning woodworker and is still setting up his shop a tool at a time. He'd recently gotten a Rigid contractor/job-site table and a Dewalt 2 1/4 HP router. I ran over to his house over the recent holidays to help him set up his table saw so it wouldn't be extra dangerous. While I was there we'd started building a portable router table of the same design as the one I used for 15 years or so. He has a garage workshop and has to share space with vehicles, especially during our upstate NY winters so a small format easily stored router table will be important.

In any case, I was heading out this last weekend because we hadn't finished building the router table or the table saw sleds and jigs that every shop should have. Unfortunately the router table insert he'd bought in the intervening week was for trim routers rather than his full sized router so we again couldn't finish his router table. Instead we spent the morning working on his cross cut sled for his table saw. He decided he didn't need a tall fence or a panel/tenoning jig so we didn't make either of those. I forgot the miter joint spline jig which is too bad because he might actually have wanted one of those.

We also went over router safety and basic use.

That took most of my morning and since I had slept adequately but not great the night before I may have taken a short nap on our couch. When I got up there wasn't a lot of afternoon left but knowing I'd be sad if I didn't get a little time in my shop. So I headed down and after putting away the toys I'd brought with me to Dave's house I decided to work on a small project.

I have a small coat closet in my kitchen next to the door to the garage. It holds most of our coats, shoes, hats, dog leashes, and other things that we might want before heading out the door. The top shelf in this closet has a pile of gloves, mittens, hats, and scarves. Whenever we want something off that shelf we pretty much have to dump the contents, sort them out then try to pile everything back on the shelf. 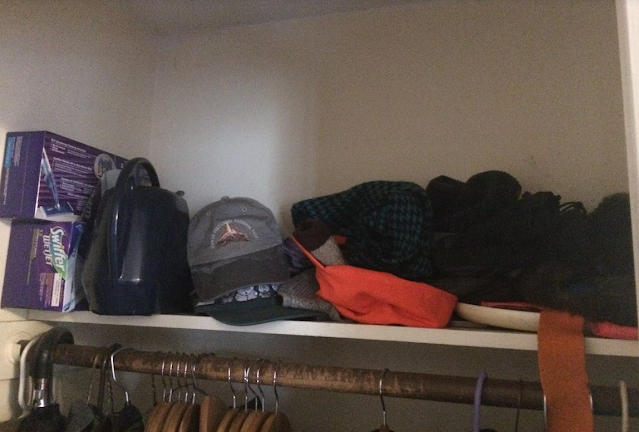 So, I'd come up with an idea on how to improve this space a few weeks back. I didn't want to start on this project while my shop was still nigh unusable due to having workbench pieces all over the place but now that the workbench was out of the way I figured this would be a nice diversion from working on the bench.

I set up my table saw with a 1/4" dado stack and raised it to 1/4" above the table. I then set my fence so I could cut dados in the top and bottom of the sides. Then I moved the fence and cut dados about 9" up the sides for the shelf. I then adjusted my fence to cut dados for the divider in the shelf and the bottom. I decided to make that dado a full width dado in order to get it centered. I very carefully snuck up on the size of the dado, then cut all four.

Then it was just a matter of fitting all the pieces together and gluing them up. Once glued I took them up and fitted them into the closet. Thinking ahead I'd create two separate boxes that I could insert them individually. Anyway, they fit perfectly and are working out great so far for organizing our stuff. 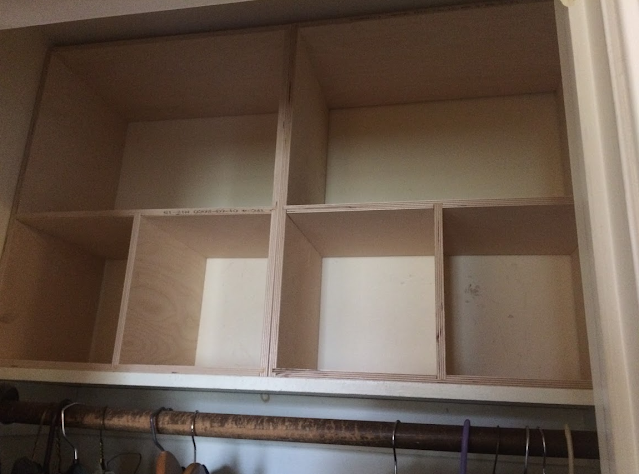 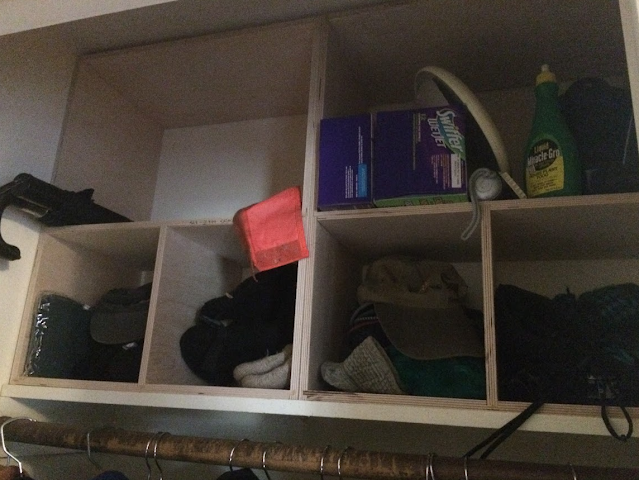 Posted by Felix Enterprises at 6:47 PM