Wooo! I got the base done and together!

I had to stop by my local Woodcraft last weekend to buy a longer 3.8 inch brad point bit. While I was there I picked up a 3/4 inch brad point bit, an extra coarse diamond stone, and some washer head screws. I follow Norm Abram's credo that a workshop should have sufficient screws on hand for whatever needs to be done. Sure, the initial investment adds up but considering that every time I need to run to Home Depot or Lowes for just one more thing it costs me an hour to an hour and a half, having sufficient supplies on hand has saved me hours and hours of wasted time.

Anyway, the next step to getting the base of the workbench together is to use some 6 inch hex bolts, washers, and nuts to connect the front and back rails to the side assemblies. I thought about making a drilling guide but then I realized my drill press was still set up for drilling holes centered on the legs. So, instead of making a template I just measured and marked where the 7/8 inch counter sinks needed to be.

After carefully drilling those I made a 3/8 inch through hole using the mark left by the brad on the Forstner bit used to make the counter sink. These through holes intersect the mortises for the front and back rails. Then I assembled the base and used the holes in the legs as guides for drilling the holes in the rails. That super long 3/8 inch bit really worked out well for this.

The last step to preparing the rails is to cut some mortises in the side rails that intersect the holes drilled down the length of the rail through the tenons. One tricky bit is that I wanted to locate the bottom of the hole I'd drilled in from the end of the rail. To do this I inserted the drill bit then used a straight edge and a couple of engineer's squares to line it up with the drill bit. 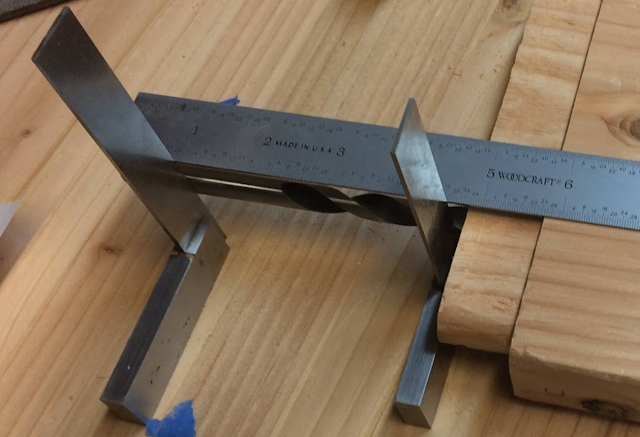 I did this from both sides of the drill bit so I could trace the entire path.

The red line is where I would have expected the center line to be if I had managed to drill straight. None of the holes that I checked with a square would have been a miss but this board is pretty typical. Probably why the plans call for cutting a 1-1/2 inch mortise. Kind of a shotgun approach.

To cut the mortises I chucked a 1/2 inch Forstner bit into my drill press. I'd tried setting a fence but the problem was that my drill press has multiple joints in the arm holding the table and getting those locked tight enough to keep them from moving when there is force applied. In any case it didn't really work out for me. I ended up doing a pretty good job drilling things the mortises by eye. However things got messy when I tried cleaning up the mortises with a chisel.

Unfortunately I didn't do the math and realize how thin the residual thickness was after drilling the mortises. I may have chopped a little hard and pounded the chisel through the bottom of the mortise and out the side of the rail. I was sad but fundamentally I can always make a new rail if this one starts bugging me down the road. Now is not the time to start rebuilding parts of the bench.

I was more careful with the rest of the mortises.

To make the leg ends into a bench base I needed to get bolts into the holes I'd drilled and a washer and nut into the mortise. This is where I found the second problem.

The plans had called for a 7/8 inch countersink in the legs for the hex bolt and washer. Unfortunately I didn't measure for the washers I have on hand. They were actually exactly 1 inch in diameter so they didn't fit. I had to chuck a 1-1/8 inch bit in the drill press and redrill all the counter sinks. This worked out well enough. I just centered the Forstner bit over the existing hold and drilled a slightly larger counter sink.

After solving the first issue - the countersink - I then started bolting the rails to the legs. This seems like it should be a very simple process. In practice it was quite challenging. The problem came in trying to line up a washer and a nut in a tiny slot while pushing a nut into the hole and turning one or the other to get the threads to catch. There was plenty of opportunity to mutter some inappropriate words. In the end what I found worked was getting the bolt to extend into the hole slightly, get the washer onto the end of the bolt, hold that in place with a small screw driver while I inserted the nut into the mortise with a pair of needle nose pliers. Once I thought I had everything lined up I'd push and twist the bolt or in most of the cases, just push on the nut while trying to spin the nut with the pliers.

The first three or four were pretty annoying. By the time I got to the last two or three it was still annoying but I wasn't spending 30 minutes cursing and failing either.

Even more annoying once I got the legs tightened up they had a bit of a rock. I'm currently satisfied telling myself it is just because my shop floor isn't very flat.

One last step to get the base finished is to add some cleats to the top of the leg assemblies to fasten the top. 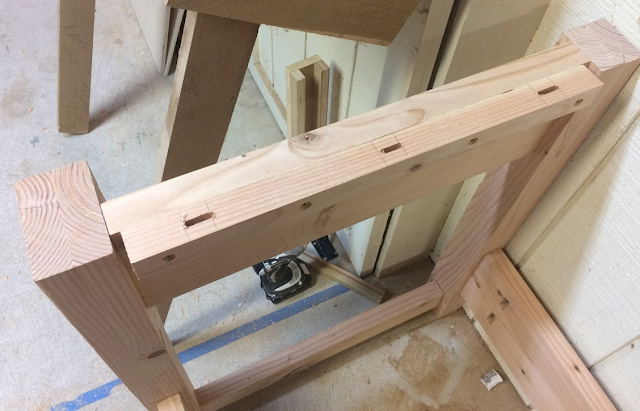 The plans call for some ledgers attached to the bottom rails and some more two-by lumber to make a bottom shelf. I haven't decided what I want to do with that space yet so I am just going to leave it open for now.

I needed to get my shop back. I've had the legs off and on set up in the space in front of my table saw. I've had the bench top sitting on a pair of saw horses occupying the back of my shop space. It's reminding me of how crowded the shop was before I remodeled and put the majority of my tools on mobile bases and moved them into the shop annex. It's been a necessary inconvenience but now that my base has been bolted together I got my wife to help me move the top onto the base. 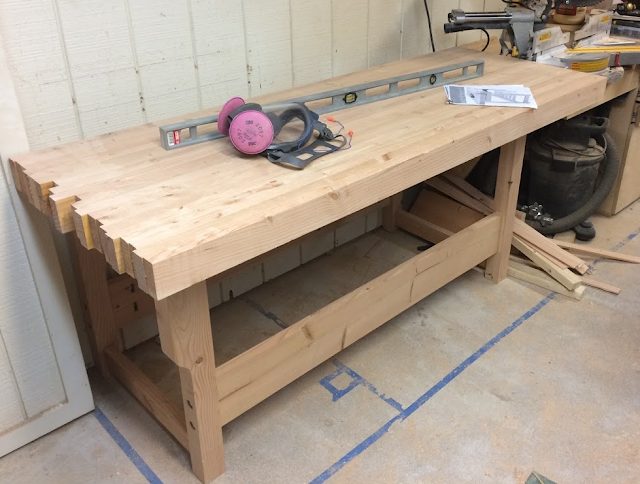 Hopefully today or tomorrow I'll be able to get the bench to a state where it's a functional horizontal shop surface and I can then move on to accessorizing. Next steps:

Once the bench is finished I'm going to accessorize it by adding a planing stop to one end, a leg vise to the front left, and probably do something with the bottom shelf area.

But before I start work today I need to get things cleaned up a bit. The pieces and parts have made putting tools away difficult to impossible so they've been accumulating on every other horizontal surface in the shop. 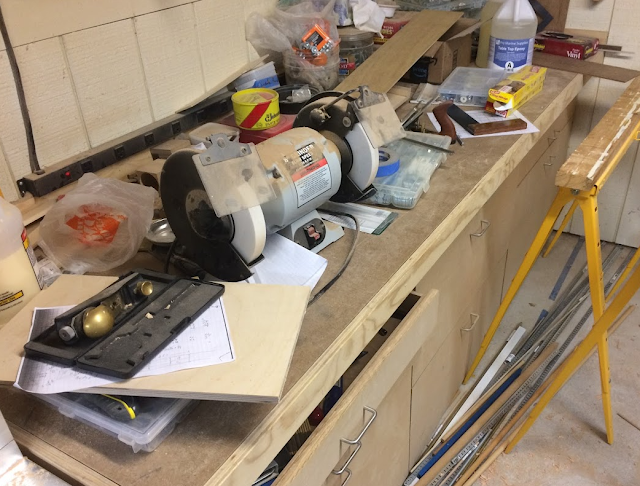 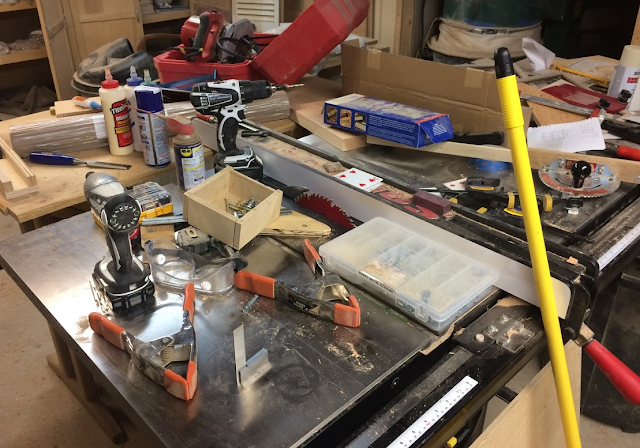 Posted by Felix Enterprises at 5:23 PM