Where did we leave off? I had placed the benchtop onto the base. My workshop was a mess. The first thing I did getting into the workshop on Saturday was to clean up the shop. It's not a terribly large shop but I could spend a lot of time carrying single items back and forth to put them away. Most items get used near to where they are stored but a few items get stored on the back wall.
My cleaning method is effectively a bubble sort. I pick a single spot and move everything in reach towards the direction it needs to go. After everything in reach has moved in the direction it needs to be, I move to another area and do the same thing. Eventually I end up with a pile of things that are a short step or two from where they need to be, then picking that spot I can put the pile of stuff away. I'm sure many/most people/some people do it this way also; however, it is also my way.
Anyway, I've got pictures:

Much better...  I'm not a neat freak but I don't like my shop being slovenly either. I also don't let tidiness get in the way of finishing a project. I basically make a mess while building a project, pausing now and then to tidy, then when the project is completed I clean everything up and put everything away.
Today I couldn't wait. Too many things had gotten piled around because I couldn't easily get to their drawers. Everything got put away, the floor got swept, I remounted the grinder in the far back corner of my shop. I don't know if that will be the final spot but it is out of the way for now. I found someplace to store my table saw cross cut jig. 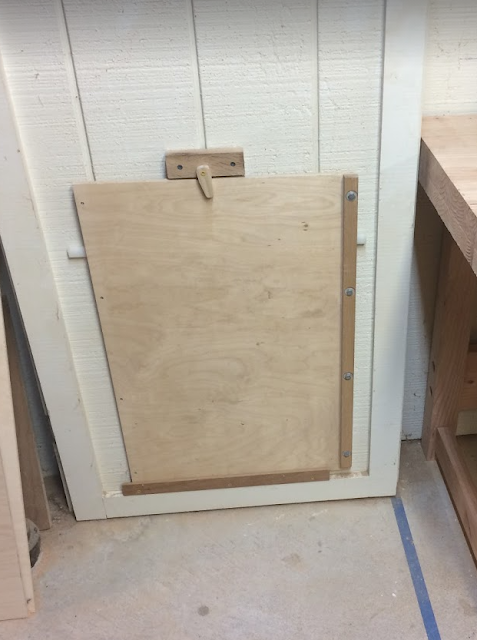 This weird bump out is protecting my water main. Before I'd put the walls up I'd once grabbed a board leaning against the wall, turned and tried walking away. The board got stuck and pulled out of my hand. Looking back I saw that it had snagged behind the water meter. The vision of breaking one of those pipes and not being able to turn off the full city water pressure as water gushed into my shop terrified me. The basement was already partially finished, I just cleaned it up and put a closet around the water meter to protect it from getting smashed.
Cleaning the shop took me an hour and a half or so. But with that done I turned back to the workbench and set up to cut the top to length.
I used my Milwaukee corded circular saw. It's probably been years since I used it last. My Makita cordless has been my go-to circular saw for breaking down plywood or even cross cutting two-by stock. However, I think it has a smaller blade and it is certainly not as powerful as my Milwaukee.
Unfortunately, I don't have guides for the Milwaukee anymore. I've cut them all down to use with the Makita. So, I went old school. I set up a straight edge 5" from where I wanted to cut, clamped it down and used it to trim the end. I used a framing square to make sure my cut was relatively perpendicular to the front/back.

My circular saw isn't so big that it could make the 3 inch cut in one pass. What I had to do was make an initial cut on the top side, flip the bench top over, transfer the cut line to the bottom (now top) and after resetting the straight edge clamp, make a second cut. To transfer the cut line I used my try square and a marking knife.
My first one of these was about 1/8" off on the far end after making the cut. 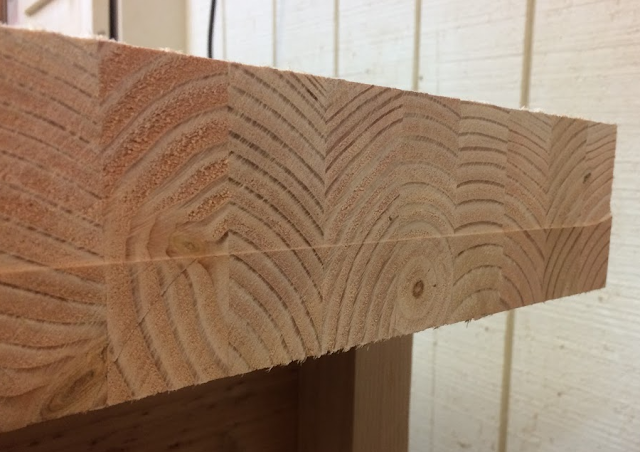 On the other end instead of trusting the framing square I transferred the cut line from both sides to the bottom (now top) and aligned both ends of the straight edge with that. Came out much better. I'm not happy about the sloppy end but it isn't going to affect the utility of the bench so I'm going to leave it. If it really bothers me some day I'll fix it then.
With the top trimmed to length I was able to slip in in between the water meter closet and the miter saw. 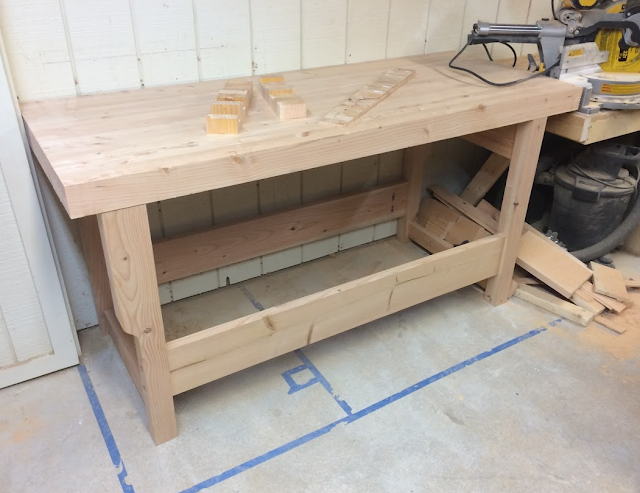 With the bench in place I was able to check the height of the bench in relation to the miter saw. Unfortunately it wasn't perfect. 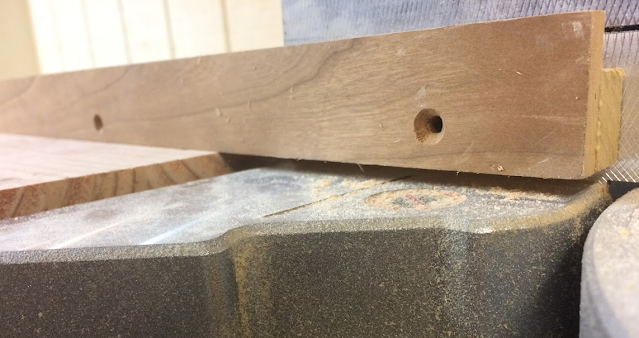 That's about a 1/4 inch gap. Curious I checked to see what was level and what wasn't. Turns out the last 1/3 of my built in bench slopes downwards a little bit. That's kind of irritating because I thought I had done a better job leveling it. Regardless that explains why the miter saw can be coplanar with the built in bench but miss aligning with the new hand tool bench. I'm either going to raise the stand the bench is on, or more likely I'll just add some shims under the left side of the saw to get it to be the same height as the bench.
The other thing I did before calling it a day in the shop on Saturday was fix my drill press. It wasn't broken yet per se but it wasn't fully functional either. My drill press is a Grizzly Radial Arm drill press. What's a radial arm drill press you ask? Well, it is a drill press head that is mounted on an arm so I can change the swing distance. Interestingly since the arm is a round tube I can twist the head to drill at an angle instead of building an angled sled or tilting my table. Of course I've never done this in the 20 years I've owned it but I could if I wanted to.
The part that wasn't working was the ability to change the swing distance. There's a small plastic hand wheel on the right side of the drill head that engages a track on the bottom of the head tube (the tube the head rides on...). It wasn't turning and wasn't moving the head in an out. Instead of having a moveable fence I have a moveable drill. If I cannot move the drill head I cannot change the distance my holes are from the fence.
I sprayed a little WD40 on both ends of the T-joint that holds the head tube to the vertical column. When that didn't work I found more things I could open up to get WD40 into the mechanism. Namely the set screw that keeps the head from moving after everything is in place. That's the little red handle on the side of the T-joint in the picture below. 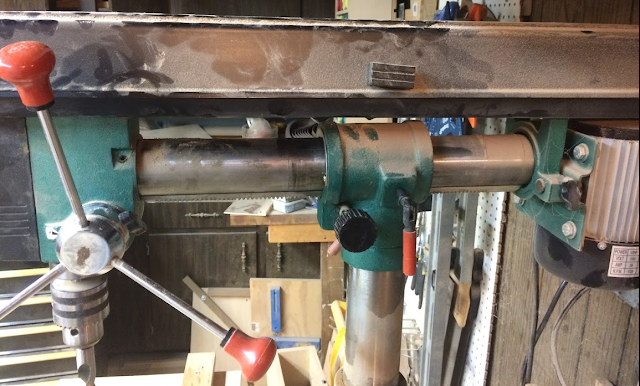 And then under this nut I found on the other side. 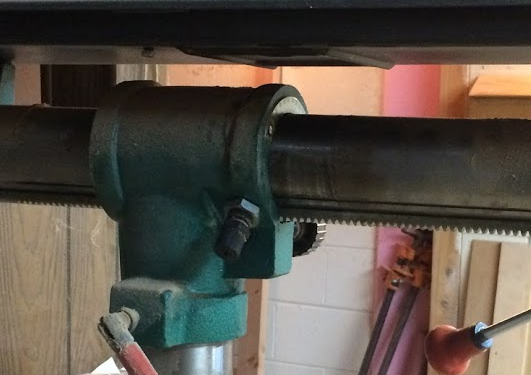 And no, I don't actually know what that nut is for. I'm sure it is something important. I'm going to have to look through my manual and see what it says.
In any case after squirting some WD40 into all the spots I could find and then twisting the head around the longitudinal axis I was able to get the little hand wheel working again. I think the twisting helped the WD40 get into whatever was binding. I also think I need to thoroughly clean to head tube and either wax it or oil it. Just another shop chore to add to my list. I need to clean the top of my table saw again too.
Anyway, with the drill press fixed I was able to start working on a drilling guide for my dog holes. The first step was to square the drill with the table. One of the downsides of this kind of drill press is that pretty much any adjustment requires squaring the drill again. To be honest, much of the time I deal with a little inaccuracy but since I am drilling a 3 inch hole through a block that will be a guide to drill 3-1/4 inch deep hole through the bench. Since there's always going to be some error just because I am drilling by hand with a guide block, I don't need to start with a guide that isn't as good as I can make it.
I took some of the leg off cuts and marked a center on the top and the bottom. After using a try square to get the drill as perpendicular as I could I drilled a test hole. It was off by a slight amount so I went back and did a better job with the square and the second one was close enough to perfect. 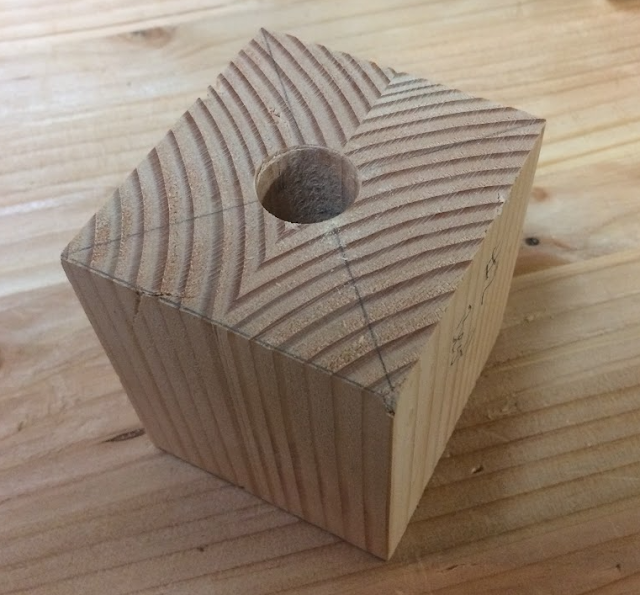 I used a wooden hand screw clamp to hold my block of wood while I was stilling it. With the brand new brad point bit the drilling went very easy.
I found a piece of 1/4 inch plywood in my scrap pile that will become the base for the dog hole jig. I'm going to add a fence that will ride along the front of the bench and keep the dog holes 5 inches from the front. I'll also have an indexing peg that will space all my dog holes 4 inches apart. 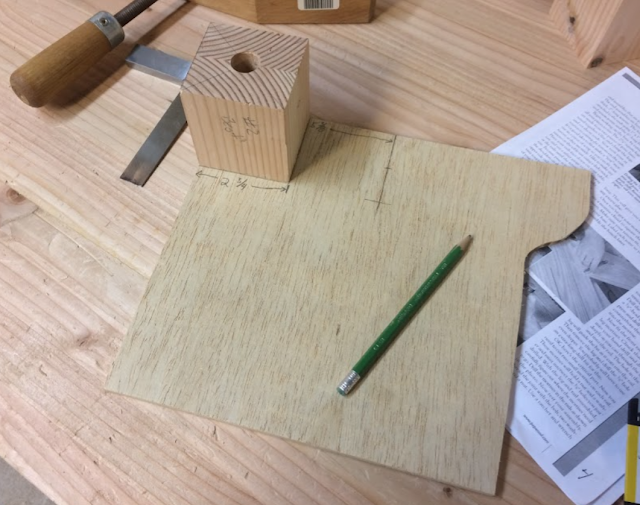 I was hoping to get this jig completed yesterday and get my dog holes drilled but instead I played Dead of Winter with some friends using Tabletop Simulator - and yes, between all of us playing we have purchased multiple copies of the game. There's always more time to do woodworking, family and friends come first.
I still haven't fastened the top to the base. Hopefully sometime this week I can get the dog holes drilled, the top fastened, and the miter saw table aligned with both the New Yankee bench and my new traditional workbench. I'll still need to flatten it but that's going to be phase 2, along with the leg vise.
Posted by Felix Enterprises at 5:02 AM