So, it isn't actually week #3 of Covid 19 but it's my third week of physical distancing. As I think I said last week I am one of the fortunate few who can work from home so my days aren't much different from pre-Covid days. I get up, work for 8 or 9 hours, walk the dog for an hour or so, make dinner then if I have any energy left go do some woodworking.

This brings me to "too many woodworking projects. I've actually got at least three projects in progress right now. I've got my super secret winter project that is a bit late - more on that later, I'm making half a dozen plaques to hang medieval weapons on a wall - more on that later. I'm also building a paper towel dispenser. More on that right now.

Like many places in this country during that first week of Covid scare there were no paper products to be found anywhere. There's still very little toilet paper. I don't really understand people. Anyway, we were out of paper towels and the only thing left at the warehouse store we were shopping at were trifold towels, so we bought a box of them. Since then we've gotten a couple rolls of paper towels so I want to build a tri-fold paper towel dispenser for my workshop.

I decided to make it out of quarter sawn white oak because I have a lot of it left over from building my dresser. Feels strange using a relatively expensive wood for knock-together projects; however, I disliked working with it enough trying to make something all match I don't think I'm going to be building another piece of furniture out of it any time soon. Anyhoo...  It's basically going to be a box jointed box with a slot on the bottom. I'll probably put a hinged lid on top to keep sawdust out of it.

I've built at least one or two box joint jigs for my table saw but I decided that since I have a nice new router table I'd build a box joint jig for that instead. I don't have any pictures of any of this project yet because all I have is a brick of paper towels, a couple of oak panels glued up, and some parts to my future router table jig.

I'll hopefully have time to work on it this weekend and get some pictures.

I'm sure the suspense has been killing you...  what is with all these medieval weapons? Well, back when my spouse and I were in our 20's we both thought they were kinda cool. So I bought a few as gifts over the years. Not having a good way to display them they just piled up in a closet. Last weekend I decided it was time to resolve this by building some wall mounts for them.

This is a project I more want more done than done well. Mostly I want the closet space back.

So I looked around for what wood I had that would make a decent wall mount and settled on some quartersawn white oak left over from building my dresser. Yes, the same white oak that I am using for my paper towel dispenser. Anyway, I printed out a shield pattern I  found on the internet and used it to cut out a quarter inch thick template. I used the template to trace out a handful of white oak blanks and a single 3/4" plywood blank. I cut them pretty close to the line on my band saw because I wanted to minimize cleanup time and then used my stationary belt sander to sand them down to the line.

I used my random orbit sander to sand all the surfaces from 80 grit up to 220 grit. It didn't feel like it should have taken too long but I believe it was actually a matter of hours.

I mounted a 1/4" shank 1/2" round over bit in my router table then used the 3/4" plywood blank to test my setup. Then when I was happy I routed the round over a little bit at a time on each of the oak shields. I kept raising the bit until I'd cut a little bit of a shoulder. 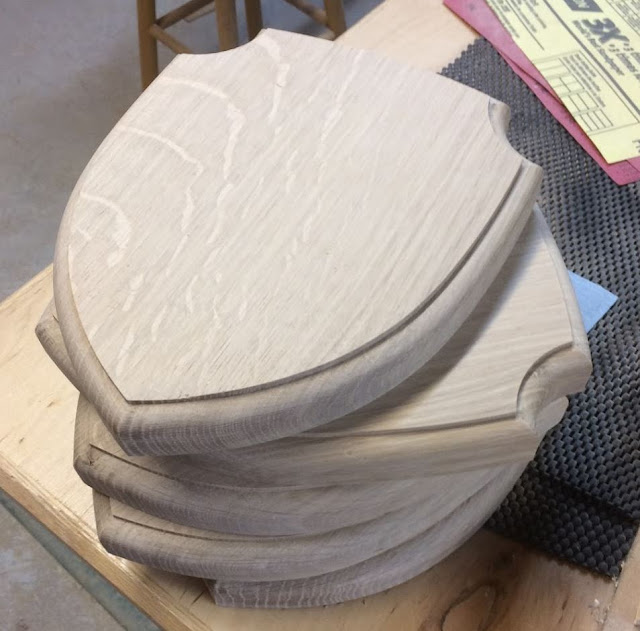 Then I considered how I wanted to mount them to the wall. Yeah, maybe it would have been better to think of that first but hey...  It all worked out in the end. I decided I'd mount them to the wall with a single anchor in the wall and a keyhole slot in the back of the shield. Making a jig to guide the router would have been easier if I'd made it before cutting the shields out. I thought I'd make a jig that I could clamp the shield in place that would guide my router. Then I realized I was putting the slot on the back. I could just cut out another "shield" out of 1/2" MDF and cut a slot to guide the router with a collar.

Since the template matched the shape of the oak shields I just lined it up, screwed it down then routed my slots. I used a 1/4" spiral straight bit to hog out most of the waste, then replaced the straight bit with a keyhole bit and finished the cuts. With the mounting slots cut in the back I measured the width of the handles on my weapons and drilled holed for 1/2" dowel supports.

This is pretty much the current state of the wall mounts. I've got to figure out how to secure the weapons on the dowels so that if they get bumped they don't fall and hurt someone or something. I'm not exactly sure how I'm going to do it but I have a couple of ideas. I'm thinking I'm just going to drill some holes and secure the weapons with a piece of paracord knotted in the back.

Then there's just finish and installation.

The super secret project? Well, I probably mentioned it already in another post. I'm building my Gaming Console Console. That will probably be a few posts by itself so I'll just mention that I glued up the side panels to the case a couple of weeks ago and otherwise they've just been sitting while I've been distracted by other things.

Stay safe out there. Physical distancing isn't necessarily about keeping you safe. Since covid can be asymptomatic and still be contagious everyone should treat themselves as infected and take steps to protect other people from themselves.

Also, note that I switched from Social Distancing to Physical Distancing. The point is that we all should not just hide from other people in our bunkers. We should be hiding in our bunkers but we shouldn't be hiding from other people. Keep your physical distance but keep your social circles close. Reach out via phone, text, email, google hangout, or whatever it takes to stay in touch with your friends and family.

If you know me and want to talk, just give me a call. If you don't know me but have my phone number please don't call. That'd just be creepy.

Posted by Felix Enterprises at 6:24 PM