I only got an hour or so in the workshop yesterday but I figured I'd give an update on what I got done.

I started my evening by cutting the top rails. I'd been careful when cutting the bottom shelf and the divider out of the 3/4 inch cherry plywood to leave an off cut that could be used for this. I cut it roughly to the right length then carefully trimmed it with light cuts until it fit tightly between the sides. Then I ripped it down into two 3 inch wide pieces.

I then cut notches in the top of the middle panel for the top rails to go between. Here is where I made my first mistake on this project. Every project - at least pretty much everyone of my projects - has at least one mistake in it. Some are horrible and require remaking one or more parts, some just require small adjustments to the plans.

This mistake was more of the latter kind. When I cut the notch in the front I cut it back 3 inches for the plywood rail and then another 3/4 inches for the hardwood trim. The problem with this is that the middle divider is also getting the same trim so I didn't need to account for it. No worries, I'd just have a weird gap up at the top of my divider that no one will ever see. 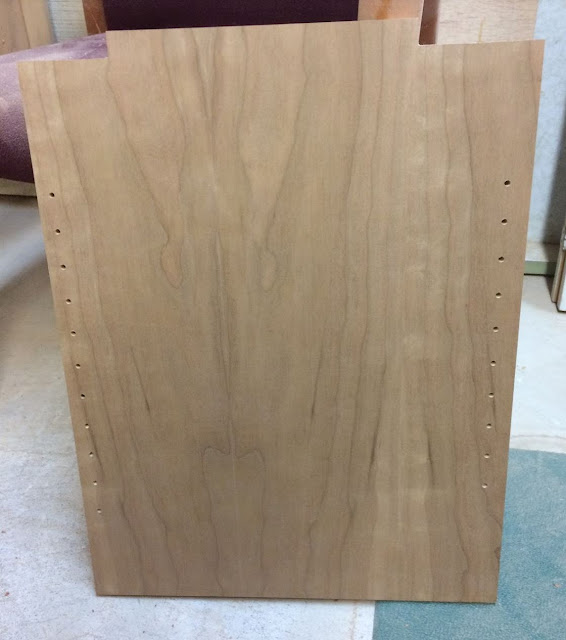 If you look closely you can see that the notch in the front - the right side of the picture - is just a little wider than the one on the left. Also, I chose this side so you can see the shelf pin holes. Looking at the photo it looks like I missed a hole. <sigh> I'll try to remember to fix that tomorrow.

I then went looking for a piece of plywood I could use for the back. I keep a stock of 1/4" luan so I was pretty sure I'd find something. But, lo and behold I found a piece of 1/4" cherry plywood leftover from the same project the 3/4" plywood came from. If I didn't care that the grain was running horizontally it would be plenty big enough. If I wanted to run the grain vertically it was going to be just a little too narrow. 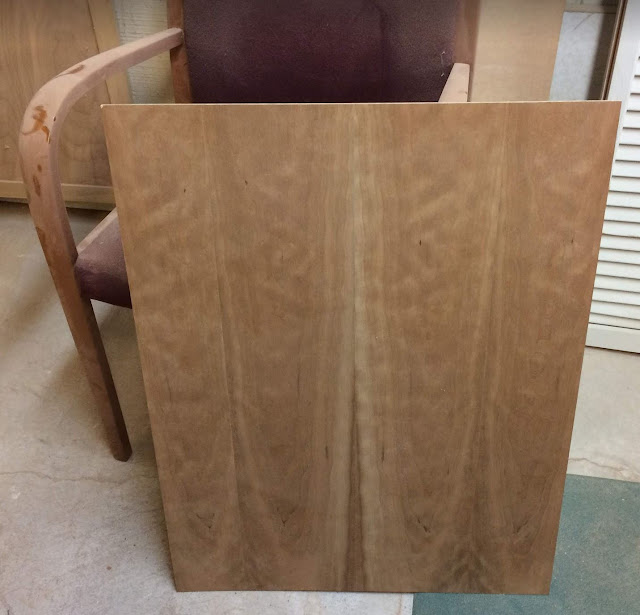 Yes, there is a very dusty chair in my workshop. It is a friend's chair and it was falling apart and they asked me if I could fix it. It's in my queue. I don't want to take it apart so I am going to try drilling holes into the joints and injecting epoxy. But that is a project for another day.

I just couldn't do it...  I could make the case narrower by taking a little off the bottom shelf. Taking from the drawer side would ruin it since the drawers have to be wide enough to hold dvd and bluray cases. So I very carefully - double checking my cut - took a 1/4 inch off the shelf side. I then carefully refit the top rails.

I decided it was time to cut the rabbet in the back of the side panels to accept the plywood back so I could get a better idea of how it would all fit. I set up my router table with a rabbeting bit to take off about 1/4" x 3/8". On the left panel I carefully plunged the side into the bit. For the right hand side I just stopped cutting when I heard that the bit had made it to the dado for the bottom shelf.

Time for more dry fitting except this time I could see how the back fit. This was probably the fifth or sixth time I'd put the case together to see how things were fitting.

I decided the back was still not a good fit so I carefully - double checking everything - took another 1/4 inch off the bottom shelf. Voila, perfect fit!

After some sitting and pondering I looked through my scrap plywood pile and found a nice piece of Baltic birch 3/4 inch plywood that was just long enough and just wide enough to work. On the plus side I cut the front rail to 3-3/4 inch so it wouldn't leave a gap behind it. I did not drill the pocket holes in the new rails. 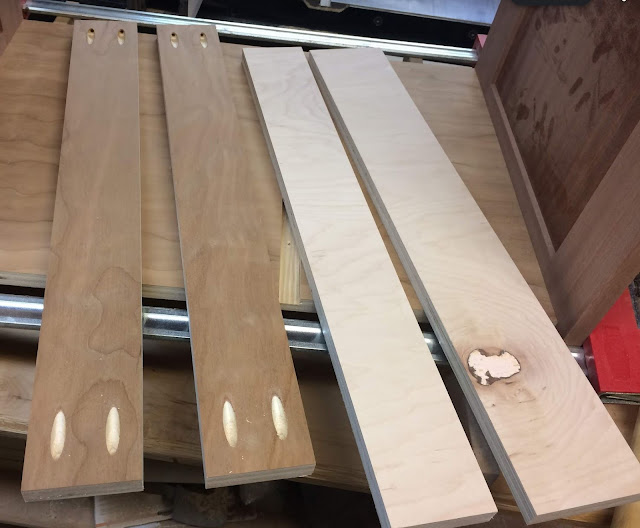 You can see in this next picture how the cherry rails are just a wee bit - 1/4 inch - too long. 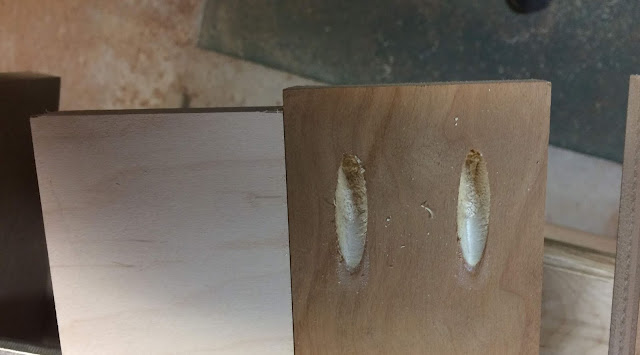 Some time during my evening in the workshop I decided I wasn't happy with how the bottom shelf and the middle divider were leaving for the back. I trimmed them down by about 1/8 inch. Very carefully, double checking that I was taking the correct side of the middle divider.

A summary of the evening would include many dry-fittings, cutting the top rails (twice), trimming the bottom shelf so the plywood I chose for the back would fit width-wise, and trimmed the bottom shelf and middle divider depth so the back would not protrude. Mostly fitting rather than cutting and construction; however, making sure everything is going to fit is an important step in the process. It is much easier to fix things when there isn't glue drying in all the joints.


I grabbed a couple of extra pictures while I was in the shop. Here's a picture of the story stick I used to drill the shelf pin holes. 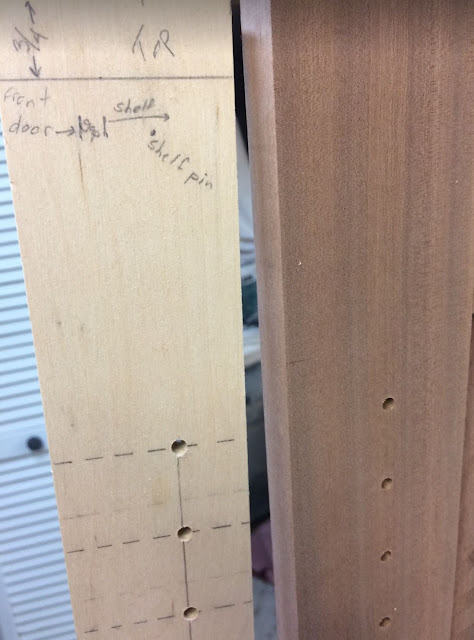 Here's a picture of the boards I used for routing the dados in the sides that are now assisting with fitting and dry assembly. 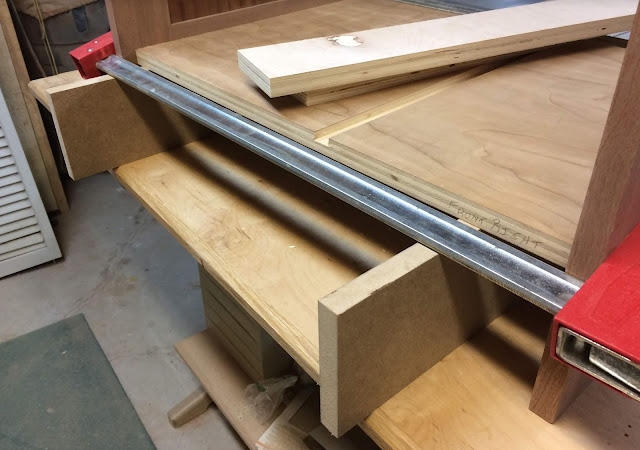 That's it for tonight.

Posted by Felix Enterprises at 6:54 PM