The paper towel dispenser is done. It still needs finish but with my wife and I working from home we're using the finishing room as an office (technically, it's always been our office, I just do my finishing in there because we don't allow the cats in there. Because my finishing room isn't available I'm going to do the finishing in the garage. However, temperatures here this last week and predicted for the next ten days are dropping into the 30's overnight and are only reaching the 50's (Fahrenheit) during the day. And rain...  oh, the rain.

Last week I'd built my box joint jig and made a couple of 1/4" thick quarter sawn white oak panels. This week I wanted to finish building the box.

I started by making a test joint in some 1/4" plywood. My previous experience with setting up box joints is they are very fiddly and require a lot of set up. In this case, to my surprise my first joint just worked. I thought about cutting more test joints but since the first one worked and the entire box is just a learning experiment I figured I should just dive in. 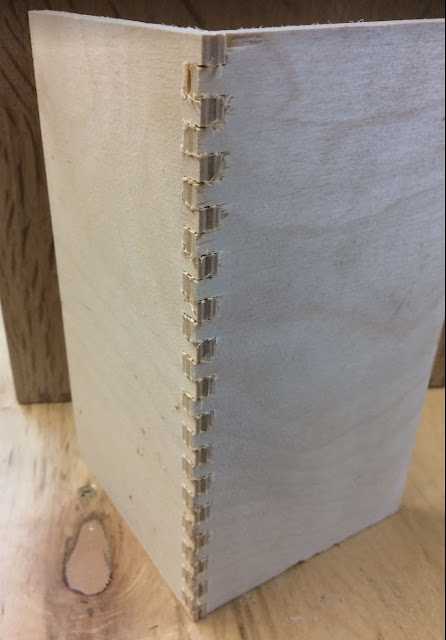 I started on the front right corner of the dispenser. Unfortunately I made two errors. The first error was not making sure I had enough room to cut the entire joint. I got most of the way through the first joint when my router table fence which I'd swung to the side got in the way of the front panel. Simple enough I thought. I'll just move the fence. And here is where I made my second mistake.

Since the panel was doing a pretty good job of staying in place I let go of it. The panel then promptly fell into the still running router bit. I didn't try to grab it. I learned that lesson years ago. However, the router bit did a great job of boring a hole into the panel. Needless to say I was disappointed. Fortunately the hole was near the end of the panel so I decided to just make the dispenser a little shorter.

After I finished the first half that corner I moved onto the side panel for the same corner. There was much less drama with the side panel. Test fitting the joint it came together a little snug but otherwise perfect. 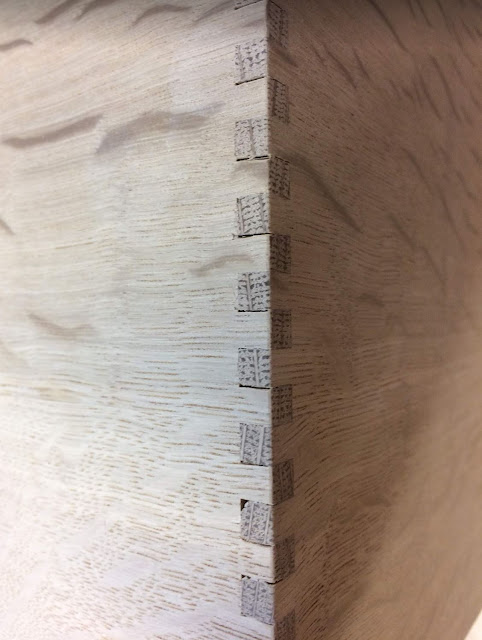 At this point I was getting a little bored. I decided to pair up the sides and cut two halves at the same time. There's some risk from the extra complexity of managing two boards at the same time but on the other hand it cuts the time in half as you have half the number of cuts. This seemed to go okay but made me nervous since it was more challenging to keep the boards aligned properly. I cut the rest of the boards one at a time. Maybe I'll move onto the more advanced techniques once I get a little more practice.

Anyway, I worked my way around the box doing the rest of the joints. Unfortunately after the first corner my joints kept getting worse. I played around with how I was putting pressure on the jig and the boards in the jig. Frankly I'm not sure if it was that or that I was using oak which would occasionally splinter leaving me an odd sized finger in the joint. Since the spacing of all the joints down the line depend on the size of the previous finger one poorly cut finger messes everything up.

I think I'll come back and try again with a more forgiving wood like poplar or cherry.

Anyway, I used a chisel to trim fingers to get everything to fit. It doesn't look good but it worked. I could use wood filler of some sort if I cared but this is a workshop project. Also, I like keeping my early bad attempts around because when I end up mastering something I can see how far I've come. I'm not embarrassed by not being good at everything on the first try. It's part of living, learning, and growing. 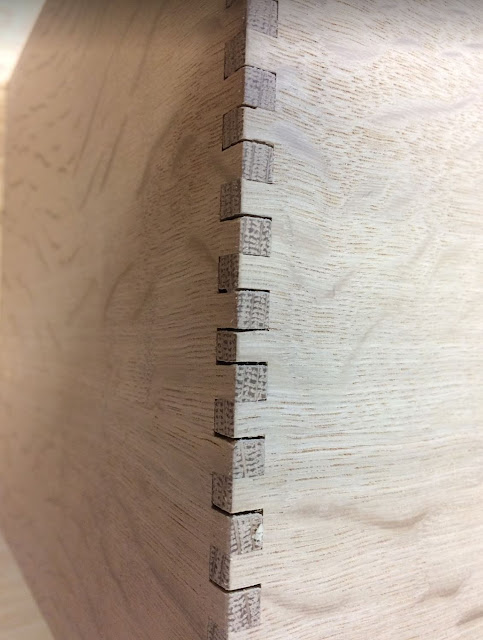 I had an idea of how I wanted the opening in the bottom of the box to work so I traced it out on a piece of 1/4" plywood and cut it out with a jigsaw. I liked the look and it seemed to work for dispensing the towels so I used the better looking half to trace out the shape on a couple pieces of scrap (one being the off cut from my mistake on the front panel). After gluing up the box I just glued these directly to the bottom with no joinery. 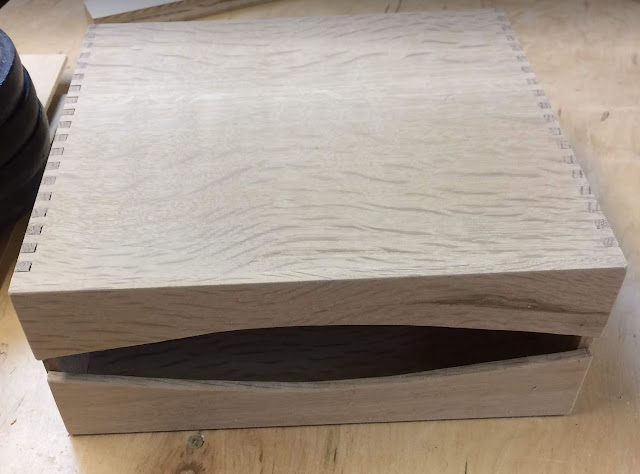 I'd intentionally cut the fingers a little long so they were proud of the sides. I used  my stationary belt sander to bring them flush, then used my random orbit sander to remove the scratch marks left by the belt sander.

Looking at my glued up box with one short side I decided that instead of cutting the other sides down to the same height as the front I could instead cut the sides at an angle and have a slopped top. My thought was that maybe it would also help keep it from accumulating dust in the shop. I used a straight edge to mark the cut then eyeballed the angle on my table saw. It took two passed (front and back) to cut all the way through but it came out fine. 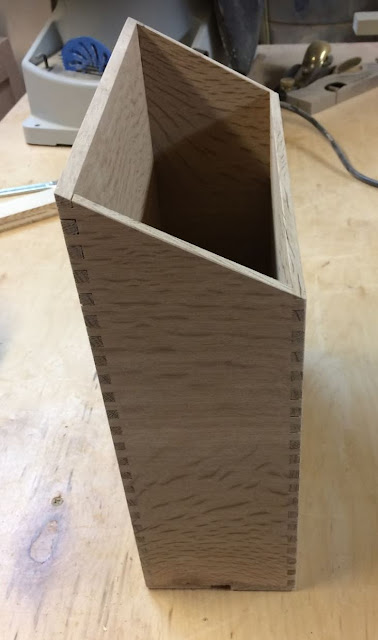 I looked for a single piece of scrap wood that I could make the top out of but all my scraps were either too thin or were too small in one of the other dimensions. Instead I took some of my 1/4" scrap and laminated them together with the top piece being larger than the box and the inner being a tight press fit. The lid has no mechanical fasteners, it gets held in place with gravity.

Along the process of construction I'd briefly thought about using a french cleat to hold it to the wall but I wanted this to be a quick build. I haven't mounted it to a wall yet; however, I am most likely just going to drive a couple screws through the back. Now that the back is taller than the front I wont even have to angle the screw holes.

It's too cold here in upstate New York to do finishing outdoors and since my family is sheltering in the home I'm deferring all my finishing for a few weeks. I've got a backlog of quarter sawn white oak projects. They're all probably going to get Watco Dark Walnut Danish Oil and a few coats of wipe on polyurethane. I'll post pictures when they are all done. 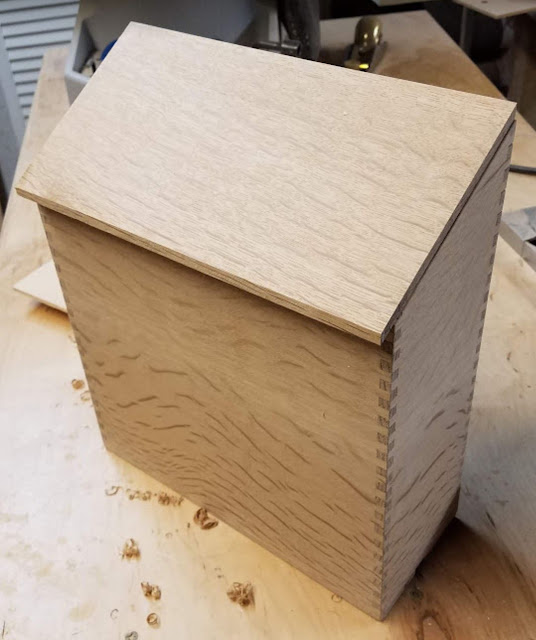 Posted by Felix Enterprises at 10:48 AM