I figured I've procrastinated enough on the gaming console console. After all, since starting it I've made plaques for mounting faux weapons on my walls, I've made a paper towel dispenser, and I got my workshop pretty well tidied up. I even gave myself the excuse that since there is a pandemic that even though I've never seriously hurt myself in the workshop now would be a really bad time to have to go to the hospital. I also made a much better drawing and parts list. 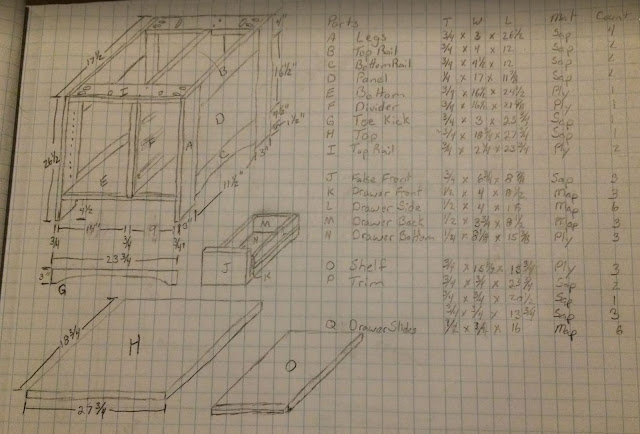 Yeah, I know...  all the "real" makers on YouTube and what-not use Google Sketchup. I haven't bothered to learn it yet and I like being able to doodle on a sketch pad and not need a computer. It works for me.

I think part of why I've been putting off finishing this project is that the next step is to cut some stopped dados in the sides accepting the bottom. I've done this operation before a handful of times but not enough to be casually comfortable with it. One of the things I've learned is that staring at something has almost never gotten it done. At some point you've just got to move forward and do the best you can. After all, it's just a day or two's worth of work and maybe fifty dollars worth of wood.

Yesterday - Saturday - I dug through my plywood stash to find something that was appropriate. I keep a variety of beech, maple, Baltic birch, and whitewood plywood in my stores. They are a staple of much of my workshop projects and quick projects like the storage unit I built for my wife's painting supplies. However, in digging though my stash I found a nice sheet of cherry plywood. Nice in that it was surprisingly flat and didn't have dinged edges or faces.

It's not nice because it is cherry and it's been browning for at least the last fifteen years. I bought a larger sheet to make a counter top wine rack for my parents as a surprise but before I could surprise them with it they bought one. I gave it to a friend and it is now in New Jersey. In any case this piece of plywood has been kicking around the workshop for over decade and hasn't been used because it is "too good" for most of my projects. It won't be the same color as the Sapele that I am using in the Gaming Console Console but I'm hoping the darker color blends better than a more blonde wood like maple or beech.

I put the end panels for the case together a few weeks ago. 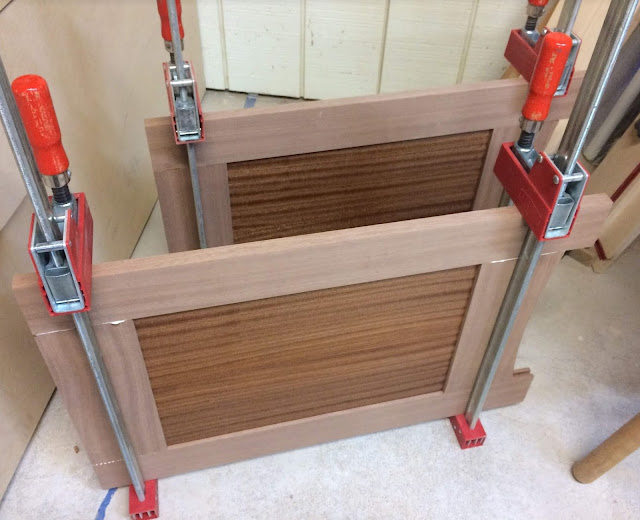 I'd resawed and glued up the inner panels. I sanded them to 180 grit then pre-finished them before putting them inside the rails and stiles. I did a decent job on the joints on sides so I was able to get away with just a little sanding with 80, 120, 180 grit sandpaper on my random orbit sander. And then they sat for weeks getting moved from one side of my shop to the other while I worked on other little interstitial projects.

The first step today was to re-measure everything. It's been a few weeks and it is possible that I diverged from my plans and the construction doesn't match. Fortunately everything was right on the money.

The shelf pin jig registers off the top as well as the font and back for the corresponding set of holes. With the jig already built I just needed to line it up, clamped it down and drilled each of the shelf pin holes. I used a piece of blue painter tape on the drill bit to make sure I didn't drill all the way through the side.

To cut the dados for the bottom panel I used a router with a 1/2" pattern bit. I don't have pictures of my setup but I used a pretty common technique. The pattern bit runs between two parallel boards that are clamped to the work piece the distance between them being the thickness of the plywood. Then with a router and a pattern bit you can just clean out the waste. To make lining up patterns I cut both boards to 4 1/2" which is the distance from the floor to the bottom of the dado. This allowed me to reference one side off the bottom of the feet, then use a spacer block to locate the second board.

On the first side I just eyeballed where the stopped dado needed to go to but this made me very nervous. On the second side I figured out where the router would need to stop and screwed another piece of wood across my pattern boards to make sure I didn't over cut the dado. 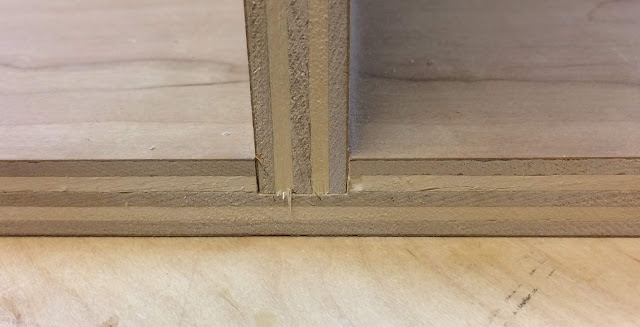 The dado in both sides came out very nice. The above picture is actually a close up of the divider panel in the bottom but the sides came out similarly well. The dado in the shelf is a through dado but the sides have a stopped dado. Since I cut them with a router I had to square up the ends with a chisel. I was prepared for some difficult chopping but I was able to do the cleanup with just a little muscle and putting my weight on the chisel. I've just been working with so much oak lately that I've forgotten what it is like to work with a wood that is more friendly to hand tools.

When it came time to dry fit the bottom in the sides I realized there was another side benefit to cutting my routing guides to match the height of the dado from the floor. It allowed me to use them as braces to support the bottom shelf. 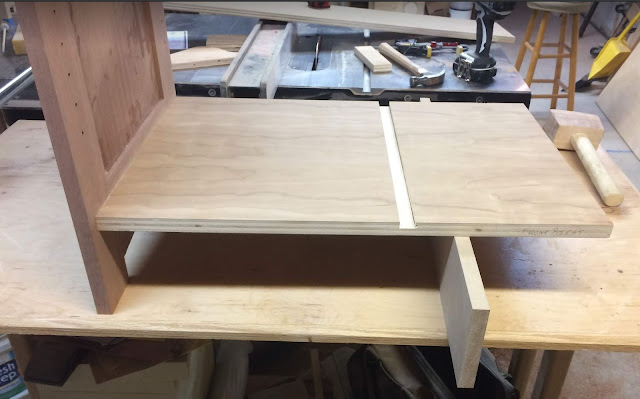 This is pretty much where I left it for the afternoon. The bottom fits in both sides. The middle panel fits in its dado in the bottom and all my shelf pin holes have been drilled and line up. I would have liked to have gotten a little more progress made today but I got the really scary stuff done.

Posted by Felix Enterprises at 7:18 PM