I spent a little time this weekend sanding the sharp corners off my carcass and drawers then prepared my sanding station to go into the finishing stage. One thing I wanted to do is hide the blonde plywood that would show in the corners. The case has square corners but the rubber mat has slightly rounded corners. I wanted to de-emphasize the blonde plywood by painting them black. I might have some black paint around but I decided to use a rattle can my wife had for basing miniatures. To prepare for that I masked off the white oak with some painters tape. 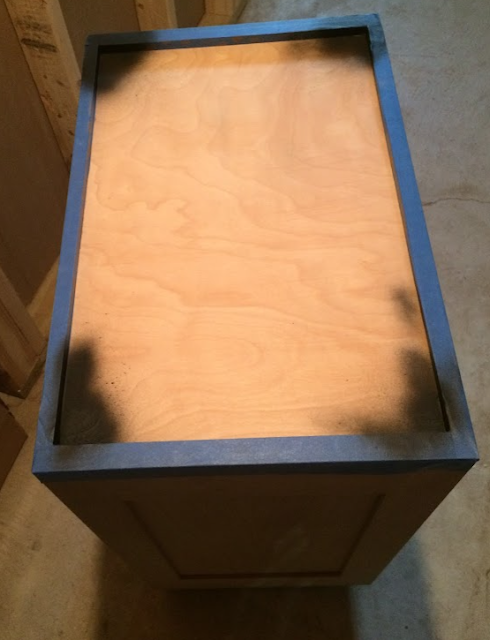 I apparently didn't get any pictures of the station with the tape before I painted the corners. Sure, it is a little messy. Yes, I didn't cover the entire thing. There is going to be a rubber mat covering the top. It'll be fine.

I've moved the sharpening station into the finishing process. I've lost my finishing-room as we've converted it back to an office for my wife during Covid. Since my plan from the beginning was to use water based polyurethane which smells a lot less than oil based and isn't explosive I moved the cart to the back of my basement - near the furnace - which is less dusty than my workshop. That wall behind the cart is actually the back of my workshop.

After giving the spray paint a day to dry I applied the first coat of water based polyurethane. 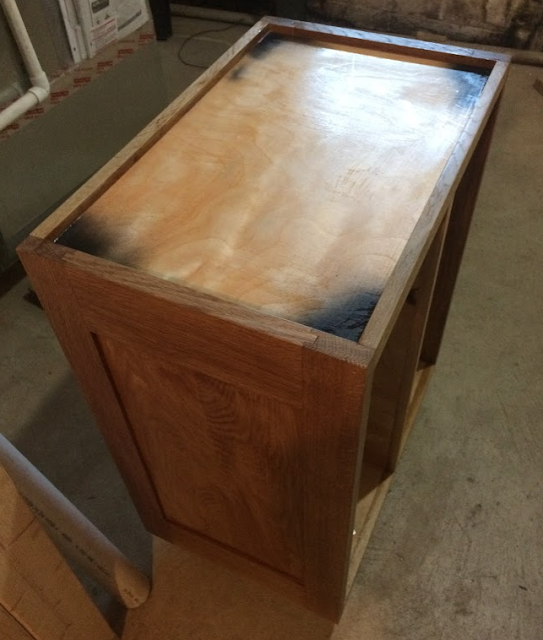 I have a love-hate relationship with water based polyurethane. It has its benefits over my normal oil based polyurethane:
On the other hand my standard oil based wipe on polyurethane has its own benefits:
The positives of one type of polyurethane are pretty much the weaknesses of the other. I was half regretting my decision to use water based poly when my wrist started hurting. If I haven't mentioned this before, I have feeble wrists. During high school I worked in a pizza shop (S'barros). I got Tendonitis in both my wrists from making pizzas there. Downside is that I have to be careful what I do with my wrists. On the plus side I know how to stretch pizza by throwing it in the air.
Anyhoo, my wrist started hurting while I was painting on the water based poly. If nothing else it made me appreciate how low stress applying the oil based poly with a rag is.
I did appreciate the very low odor. I have a poor sense of smell due to being allergic to cats and having three of them. However, I try to keep the odors to a minimum so they don't bother my wife. The water based poly could be smelled when right next to the project but it didn't even stink up the basement much less the rest of the house.
This is a shop project so I was really mostly concerned with providing protection from all the water that it is going to be around as well as trying something new. Any issues with poor application would be a learning experience and not a detriment to the functioning of the project. However, it raised the grain something horrible. I should have been expecting it. I know water based finishes raise the grain. I had just forgotten.
That's where I left it for the weekend. I've got to give it a quick sanding and then another few coats of polyurethane. I need to finish the drawers by making some white oak veneer to go on the fronts, more polyurethane and then installation in the cabinet along with handles.
Feels like I am coming into the home stretch even though there is a fair bit left to do. Hopefully I get some good sleep tonight and can get a few hours in the shop tomorrow night.

Posted by Felix Enterprises at 6:03 PM