So after the flurry of activity yesterday you'd think I'd have a lot of progress to report for today. Well, I don't. Took me a while to get down into the workshop, then after I finished the door I decided I'd rather take the dog for a walk than find something else to work on.

From yesterday I had the rails and stiles roughly sized as well as the panel glued and planed to 1/4 inch thick. Today I started with trimming the stiles to length. After checking that the stiles were the right length I made several very careful measurements. I measured the door opening (10-3/16 inch) and the width of the stiles (1-1/2 inch each or 3 inches total) and calculated a rail length of 7-1/16 inch (1/8 inch for door gaps). I then put the two stiles in the door opening and measured the remaining space and got 7-3/16 inches.

My math was good.

I needed to add 3/4 inch to the rail length to account for the depth of the groove. So I cross cut my rails to 7-3/4 inch. If you are astute and playing along and doing the math alongside me you'll have noticed that I took an extra 1/16 inch off the rail length. That's because I don't want to actually completely bottom out the stub tenons in the grooves. That 1/32 inch on either side will give some space for glue squeeze out and will keep my shoulders tight.

Next was the stub tenons on the rails. I used one of the test blocks to set up the saw. Fortunately the fence setup was perfect already and didn't need to be adjusted. I did have to adjust the height of the blade. The first test tenon fit perfectly with firm hand pressure so I then cut all four tenons on the two rails.

I dry fit the door pieces to make sure they worked and realized I hadn't kept good downward pressure on one of the stiles so the groove was uneven and in part wasn't deep enough. Fortunately I hadn't touched the fence setup so I could just raise the blade and take a couple of passes to clean up my mistake. 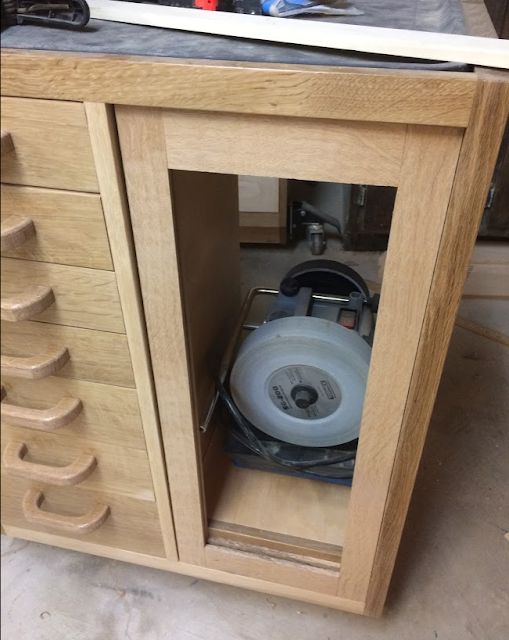 And another dry fit.

And just another check in the cabinet to see how it'll look. 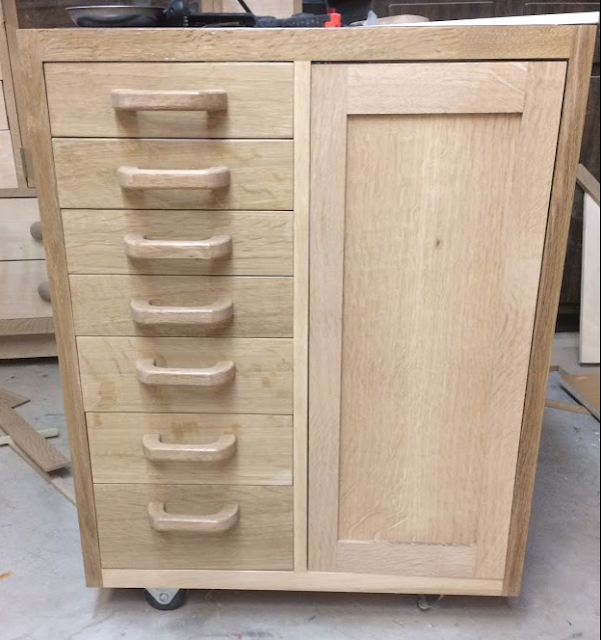 After all the fun of dry fitting. I sanded the panel at 120 grit then 180 grit. Then a little bit of glue on the tenon faces and some clamps and the door was glued. 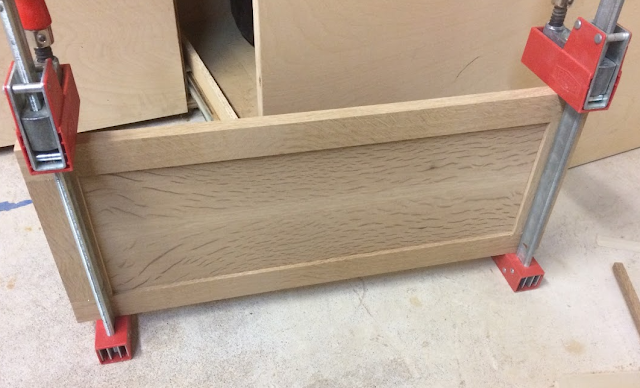 That's where I got when I called it a day. Sometime this week - tomorrow hopefully - I'll get it out of the clamps, sand the rails and stiles and then start putting polyurethane on it. I also still need to cut out the back panel and put polyurethane on that too.

I could have found more time today but I wanted to take the dog for a walk, make dinner, and make pizza dough for dinner tomorrow or later this week.

Posted by Felix Enterprises at 5:33 PM