Went for a walk with the wife this morning. It was a very warm 47 degrees out and we went about 3 miles around the neighborhood. It was very nice. That was followed by several hours of sitting on the couch and playing on my phone.

I got down to the workshop around 1:00 and started working on the door to the sharpening station. Since the panel needs to be glued and then brought down to the final thickness before the joinery in the rails and stiles can be done I started by resawing a 25 inch length of white oak. The boards I got out of that were probably around 3/8 inch so plenty of meat to clean up later. 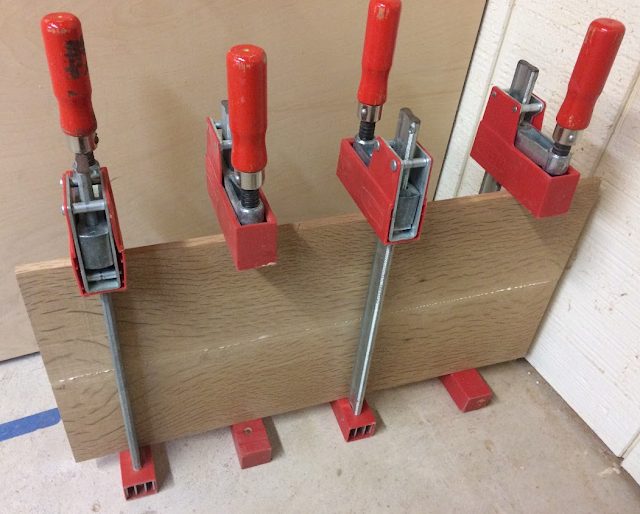 After getting the panel glued and in clamps I started working on getting the rails and stiles cut out. I had just enough left on the gnarly board I'd used to get the panel from.

The board was pretty flat but I ran it over my jointer and then through my planer to get the other side clean and parallel.

After running the board over the jointer there was one rough spot left but since this was a 5/4 board and I'd only taken 1/16 inch off at the jointer I wasn't worried about taking that out before running it through the planer. It's a pretty small spot. I didn't notice any issues. After getting the other side flat I flipped the board and removed the ugly spot.  That still left me with a full inch left. 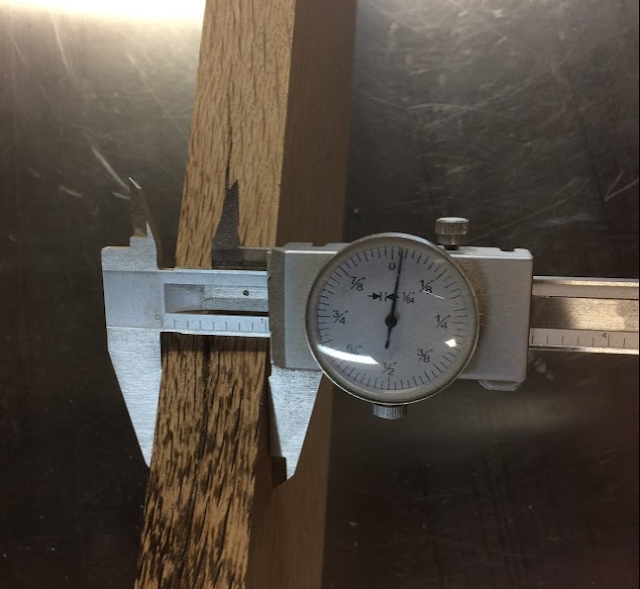 When I was doing the sides I didn't have to worry about getting them to any specific thickness so they are somewhere betwenn 7/8 inch and a full inch thick. However, for the drawer, I only left about 3/4" space between the front and the sliding shelf on the bottom. Fortunately my planer is very consistent and each revolution of the hand wheel takes off 1/16 inch. That means four full revolutions and I'd have 3/4 inch thick boards. I did it in eight passes to not over-strain the planer. 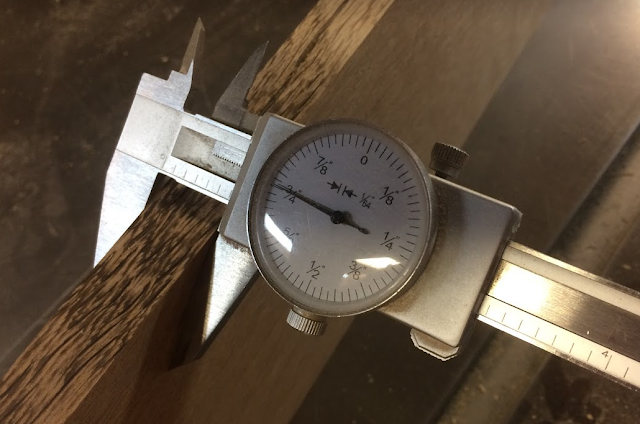 I'll take it. Close enough. After thicknessing the boards I ripped them to width.

Unfortunately one of the boards warped. Fortunately I had plenty of width left to correct it. I crosscut both boards to length (got one rail and one stile out of each). The rails were short enough that any bow left in the board wasn't apparent. The stiles just needed a pass across the jointer then ripped to final width on the table saw.

Getting the rails and stiles milled only took 25 or 30 minutes. Since I had used Tightbond II on the panel and needed at least another 10-15 minutes before I could take it out of the clamps. I moved onto my other project for the day which was to set up my new saw.

My Dewalt compound miter saw was one of the first tools I bought for my workshop. It's served me well for the last 20 years but a couple of weeks ago while watching YouTube woodworking videos I noticed that the new fangled sliding compound miter saws had a depth stop on them. This allowed the guy making the video to make dados across a 2x4 by making repeated cross cuts then cleaning out the waste with a chisel.

Whaaaat! I know! How did I not know these tools could do this? I've been using my table saw on short boards for this kind of thing, and a router for the longer boards.

Anyway, I decided to upgrade. 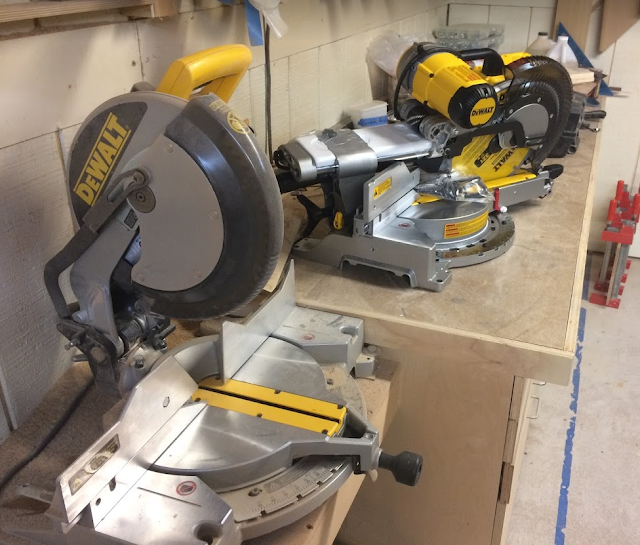 The old saw is front-left, the new one is back-right.

The old saw is still in great shape so I am selling it to a friend for about half of what I paid for it so we're both getting a good deal.

I was a little nervous about the size of the new saw. Those rails really stick out the back quite a ways. Fortunately someone asked the question on Amazon and there was an answer of "It's 18 inches from the furthest back the rails can go to the fence." Well, they were either wrong or they lied. It's actually 22 inches. With the saw set for a 90 degree cut the saw extends another 19 inches into my workshop.

My shop isn't small but I just reorganized things to get me more room. While I think the saw is much better suited for larger shops or perhaps a job site I decided I'd be able to make it work. The next step was to rebuild my miter saw platform to hold the new saw. 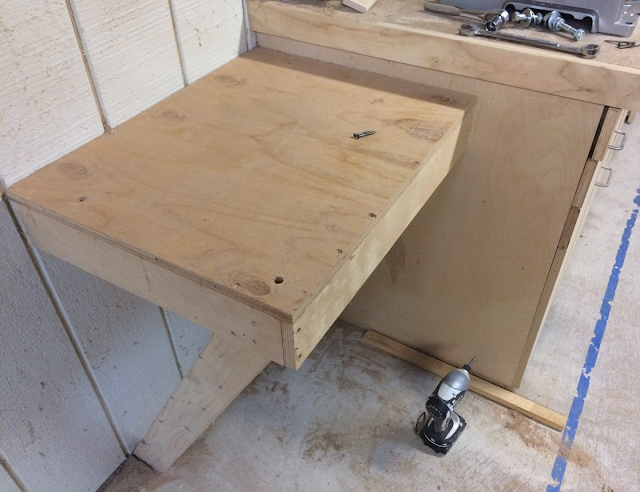 I briefly debated building a new platform but the old one is just big enough to hold the new saw so why throw it out when I could reuse it. However, since the new saw is much deeper the platform needed to be moved outward. 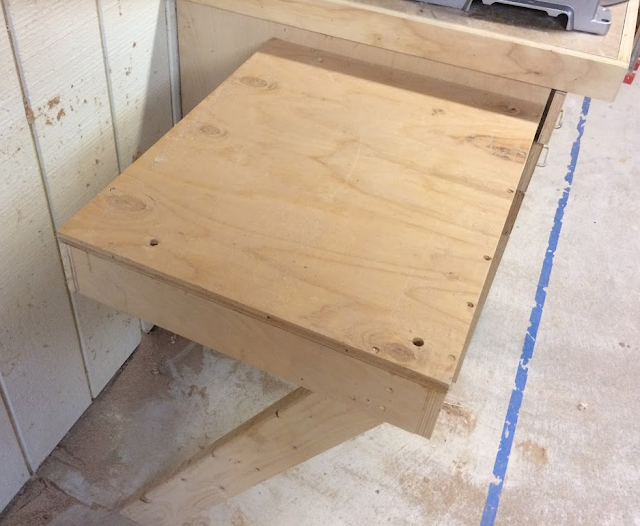 At a quick glance the last two pictures look much the same but the lower one has the platform pulled out to fit the new saw. 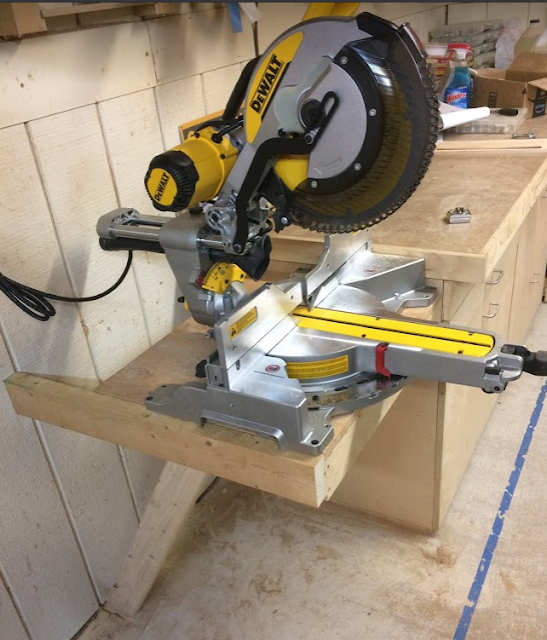 I moved the leg back so that it would be out of the way and would have the wall as a brace. To move the platform I screwed a ledge onto the workbench so the height wouldn't change. To move the leg I attached a temporary leg.

After putting the saw on the platform I realized that the new saw was actually about 3/4 inch wider than the old one. I cut down the 2x4 temporary leg to scab onto the side of the platform. As a bonus I extended it back to the wall to give the platform a little more rigidity.

The gap isn't a problem, in fact it's going to be a feature. My old saw did a pretty good job of throwing all the sawdust out the back. If this new saw is the same I can capture the dust by just letting it fall into a garbage can.

I have an old kitchen garbage can that I've been using for larger plywood and pine scraps. It'll be perfect for collecting dust. I added some ramps made from some scrap luan and some hardwood that I cut a 45 degree bevel on to help chute the dust into the can. 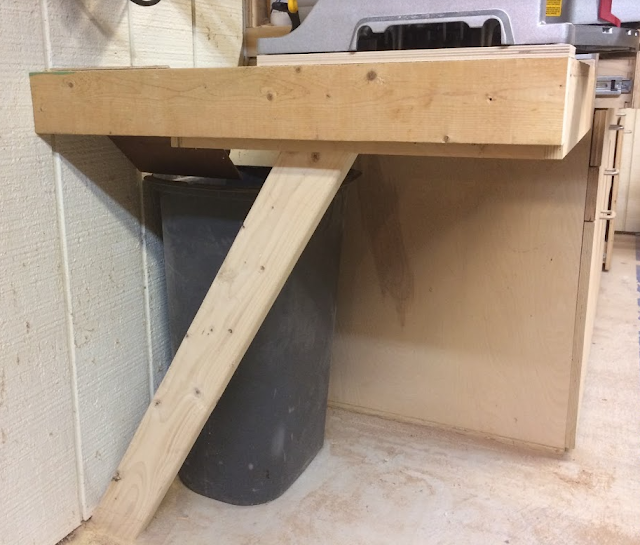 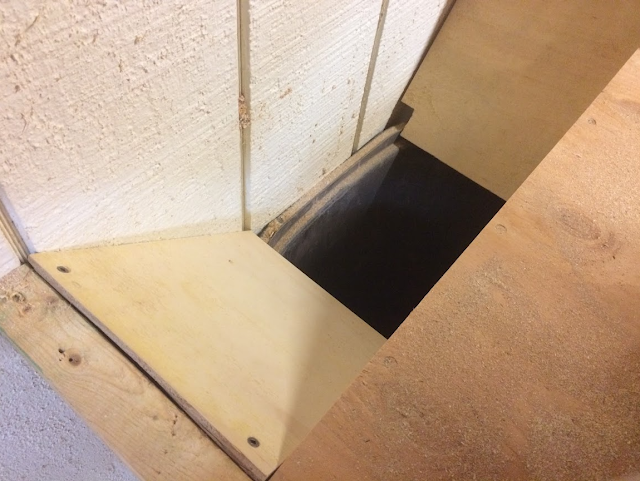 Then looking at the set up I decided that while I don't think I've ever lost anything to it falling into a garbage can this was just too risky. I thought about putting a hinged lid on it and using some rare earth magnets to hold it up while I was cutting things. That's not crazy complicated but it'd still cost me a couple of hinges. I found another scrap of luan I could just leave over the opening for now; however, when I set it in place I had another idea. 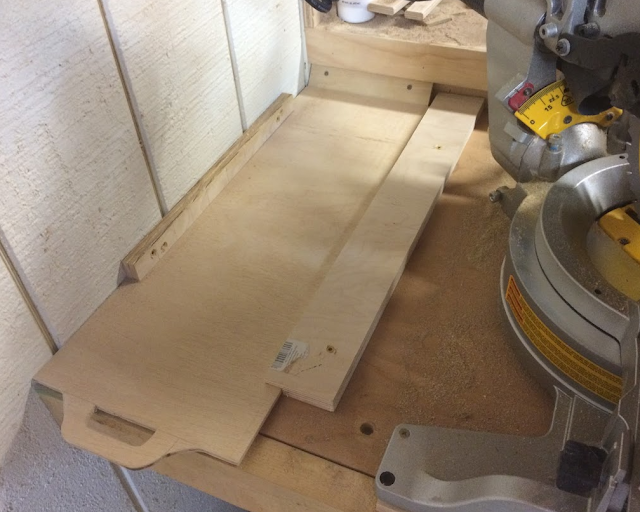 I screwed a couple pieces of scrap plywood to the wall to make a slot and then cut a rabbet on a scrap piece of 1/2 inch ply to capture the other side of my dust chute cover. I cut a hand hold into the end and Bob's your uncle. 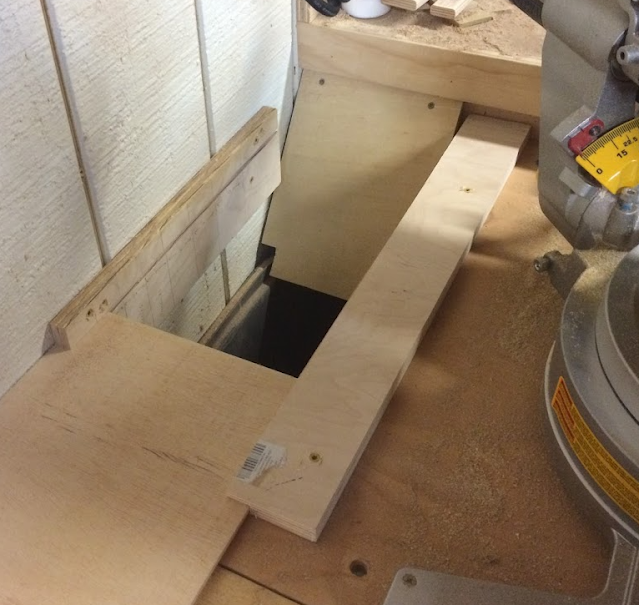 The saw does stick out too far when it is set up for a 90 degree cut. However, tilted to 45 degrees it doesn't take up more space than the workbench does. 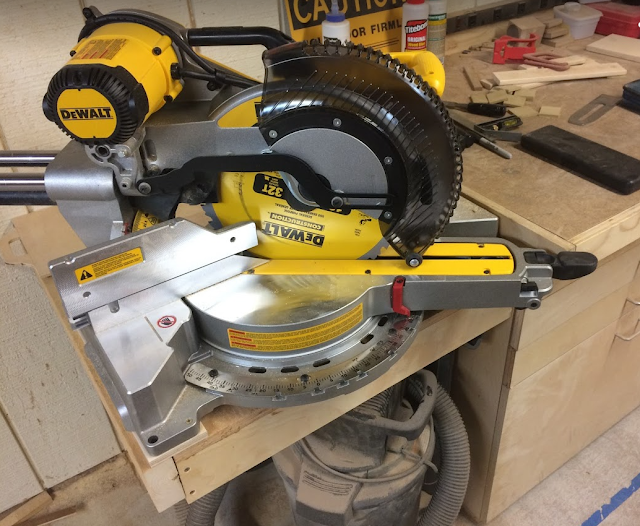 You can see I needed to add some 1/2 inch plywood "shims" under the saw to get it to be level with the workbench. I knew this was going to be necessary but I figured it would be easier than raising the entire platform when I remounted it closer to the front of the bench. That would have required extra shims and either making a new leg for the left hand side or shimming it up.

The old saw was held in place using heavy 3/8" bolts. The new saw is held in place with some 2 inch deck screws. They should be plenty. The bolts were over-kill.

With the new saw setup and "tested" by cutting the pieces for the dust chute and left side brace I still had some time left before needing to clean up for dinner.

I used the time to clean up the shop putting tools back in the shop overflow storage, sweeping dust, and pulling the panel for the sharpening station door out of the clamps. I scraped the glue then ran the panel through the thickness planer until it was 1/4 inch thick. All that's left to make it a door is to cut the grooves for the panel and the stub tenons on the rails. Oh, and a little glue.

Oh! And apparently while I still contend that math is hard, I found the eighth handle I'd made for this project. It must have fallen on the floor and gotten shuffled. Yay!

All in all a very successful day. I had a lot of fun. I'm really hoping I get enough sleep tonight that I'll be able to get into the shop tomorrow to finish constructing the sharpening station door. Unless I get into the shop extraordinarily early I probably wont be able to fit it and mount it but this is a holiday week in the USA so I should have plenty of time during the week to get to it.

Posted by Felix Enterprises at 7:17 PM