It's Thanksgiving in the United States. I didn't spend all of Thursday cooking like I normally do. Normally I spend a large part of the morning cooking for us and my wife's parents. I really like cooking - almost as much as I do eating - so I normally try to make as impressive a meal as I can manage. There've been years I made over a dozen dishes.

This year with Covid my wife and I are celebrating Thanksgiving alone. I settled for a smaller list of dishes: turkey, mashed potatoes, gravy, shredded Brussels sprouts, corn casserole, dressing, and rolls.

I approach cooking like an engineer. I know people who can just wing a large meal and make everything work most of the time. I use a project plan. 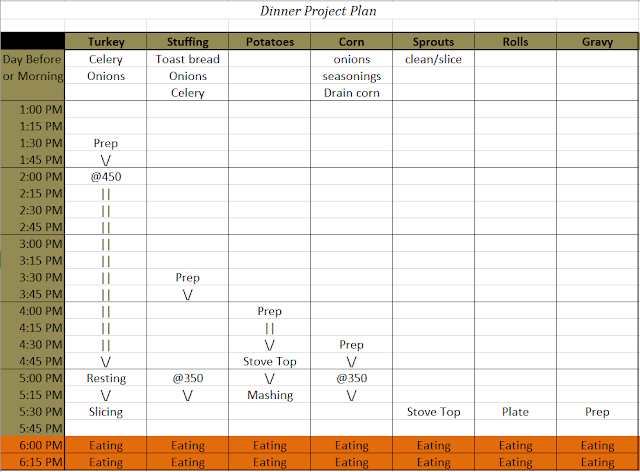 Anyway, the meal came out fine. The turkey might have been a bit too salty - I brined it then seasoned it again - but it was fine. We used pre-shredded Brussels sprouts from Wegmans but they were sliced too thick so they didn't cook as well as when I shred them by hand. My frozen rolls failed to rise and got tossed, Regardless, it was a good dinner. The usual four hours of cooking and fifteen minutes to eat.

I didn't get into the workshop on Thursday because of cooking, eating, and an early puppy play date. I didn't get into the shop on Friday because I'd slept poorly the night before. I've almost certainly mentioned this before but I take shop safety very seriously. It doesn't mean I think I'll never have an accident; however, I can assure that I'll never have an accident because I wasn't mentally fit for using power tools.

I did get into the shop on Saturday. I had slept poorly the night before but sleeping in and then a late morning nap got me to a good state. I only had a couple of hours but I marked then cut the hinges on the door and the sharpening station cabinet.

I started by chopping a test mortise by hand with chisels. It worked but was pretty ugly. The edges were find but the bottom was a mess. I then tried free handing another test mortise with my trim router. This also worked okay and had the additional benefit of having a very nice flat bottom. The downside of the freehand routing was that it still needed cleanup in the corners and since I was free handing it I was nervous about getting too close to the edges so those needed cleanup with chisels too.

I ended up creating a router template that I could use with a dado cleanout bit. I probably should have started with this approach but shop furniture is half about the utility it will provide when it is done and half about practicing skills in a safe environment. I found a 1/2 inch piece of scrap plywood, cut the shoulders then wasted out the middle by taking multiple passes over my table saw blade using my miter gauge to steady the wood.

The test mortise using the template came out so nice I moved onto the door and cut the mortises there.

I'm not sure but I don't think I've ever used hinges that require mortises. I was a little nervous that they wouldn't line up between the door and the case so after cutting the mortises on the door I put the door back into the case opening to double check my marks. It was while I was doing this that I noticed that my lower hinge was going to interfere with the sliding shelf.

I'd already cut the hinge mortise on the door but not on the case. I decided to just go ahead and cut another lower hinge mortise a little higher on the door. It is going to be unbalanced compared to the top hinge but I don't care enough to move the top hinge down. It'll just be unbalanced. Unfortunately that also means I have an extra wide mortise on the bottom. I could fill it in with some scrap white oak but I don't think it's that important. I don't know if I'll ever notice much less anyone else. I'm certainly not going to lose sleep over it.

After confirming the mortises on the door were lined up with the marks on the case I emptied all the stuff out of the case and hoisted the cabinet onto my workbench where I could work on it conveniently. I used my mortise jig and cut the lower mortise. The jig was a bit too wide to cut the top mortise so I cut it down to fit. It's a one use jig so I'm not too worried about it.

After cutting both sets of mortises it was time to start attaching the hinges. I used my center punch to mark where the hinge screw holes were in the door, pre-drilled them then attached them with some 5/8 inch #6 wood screws from my inventory. As the New Yankee plans say, all wood shops should have sufficient wood screws. Since I had a little trouble with screws breaking while attaching the full extension slides I made sure to drill larger holes than I would have in softer wood and then dipped the screws in wax before driving them in by hand.

I was thinking about how dangerous it was to install doors. You get the first screw in and suddenly you have a long lever arm that could tear out the hinge if the door slipped. I'd just finished telling a new woodworker friend about how workshop "furniture" is a tool and if you need to modify it you do. It isn't a dining room table so if you need to put a screw in the middle of the top you do. If the top gets too many screw holes you can just replace it.

I was looking at my bench thinking about what I could do to to modify my bench to support the door while I attached the hinges. Then I had the epiphany that I could just pull out one of the drawers and rest the door directly on the drawer. As you can see in the photo above it worked great.

After getting both hinges attached I closed the door to see what kind of fit I had. I was quite pleased... 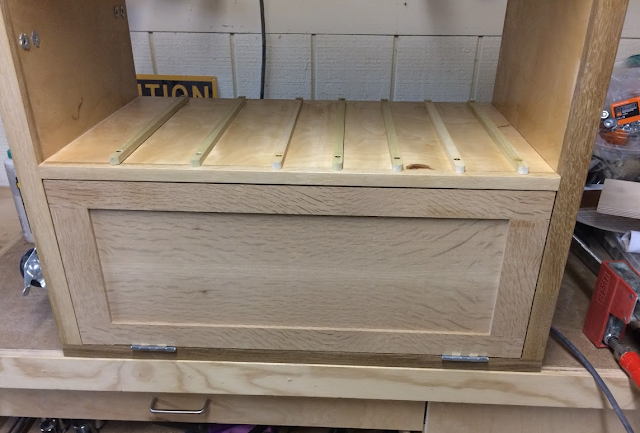 That's probably one of my best fit doors yet. No "fitting" required. This has nothing to do with the hinges and entirely with good measurements and good machining. Just made me doubly happy that my mortises worked, the hinges fit, and that my replacement screws fit the hinges well enough that the door closed.

If you look closely at the above picture you can see where I had to expand the hinge mortise on the bottom.

After gazing proudly at my door I pulled the hinges and brought the door over to my outfeed table where I could clamp it down and use my modified door pull template to put holes in the door to attach the handle.

Next step is sanding the door then off to the finishing room - otherwise known as my utility room - to apply a few coats of water based polyurethane. Other than that - and final assembly - I just have the back to cut out of a piece of 1/4 inch Baltic birch plywood, finish, and attach to the case. It'll probably take me a weeknight of evenings to get this small amount of work done but that's fine. I'll get to start on my hand tool workbench next weekend. I'm super excited about having a good bench for doing hand tool work at. I think I might order a Moxon vise kit while I am dreaming of using super sharp chisels at my new workbench.

Posted by Felix Enterprises at 5:50 PM