I had another long weekend to work in my shop again due to the Christmas holiday landing on Friday. We didn't do much to celebrate but I did spend a few hours cooking on Friday. I made ham, corn casserole, scalloped potatoes, and shredded Brussels sprouts. It came out quite adequate.

Saturday I started working on the joinery for the legs. This amounted to a dozen mortises overall. Two in each leg for the side rails and one in each leg for the long front and back rails. I thought about making a router jig but most of the mortises need to be 2 inches deep. That is a lot of work for a router bit and since I don't have tall bits I'd have to add a router extension. Instead I decided to drill out most of the waste with my drill press and finish the mortises with a chisel.

Turns out drilling out a dozen mortises with a forstner bit takes a lot of time and generates a fair pile of wood chips. I did set up a roller stand to help support the end of the leg that didn't fit on my table. It took a fair bit of strain off my arms trying to hold the leg in place while drilling the mortises. Drilling mortises on my drill press was a learning experience. I've probably done it this way before but never to this extent (number, depth, length). It was a lot of work.

After drilling a couple of the mortises I switched to cleaning out the mortises.  I started with what I figured was the most traditional approach which was to clean out the mortises by chopping vertically down the sides to remove the waste left by the Forstner bit and to square the corners. My chisels aren't sharp yet - yes I know, I even have a sharpening station - so this work was brutal. It was hard going and left the mortises kind of messy.

I did one or two mortises this way and sitting on my shop stool thinking about how many more hours of mortise chopping I had left staring at the tenon on one of my rails I though about how maybe it would have been easier to make the bench with loose tenons. I could have just rounded over the loose tenons so they'd fit the mortises. Then I remembered that I have in the past just rounded over the tenons without using loose tenons.

The other epiphany I had was that since I was using a Forstner bit to drill out the waste I could overlap my holes a bit more and reduce the amount of waste that I subsequently had to chisel out. By drilling every 1/8 inch or so I was able to reduce the walls to just being slightly rough rather than having a lot of waste to remove between holes. This meant I could take my chisels and run them the length of the mortise smoothing the sides instead of having to chop down. Combined with no longer needing to chop out the ends to square up the mortises these two saved me a lot of work.

The last thing that I did that saved me work was after the mortises were clean, remove waste from the tenons with my shoulder plane rather than trying to widen the mortises. This was relatively easy work and went pretty quickly. Relatively quickly meant that by the end of the day on Sunday I had my all my tenons fitting in my mortises and could stand up the legs to see how they looked. 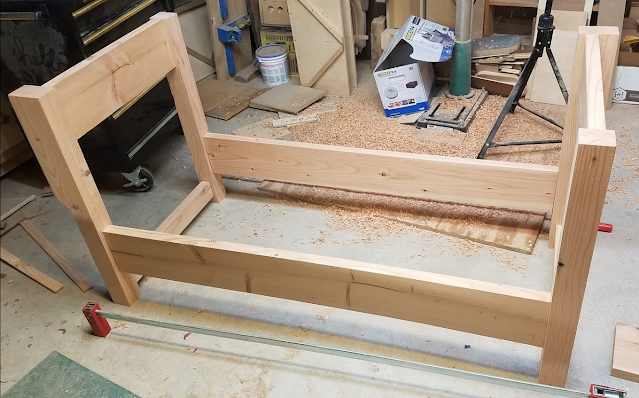 So how did they look up close? Well, I know that there are some pretty ugly tenons and mortises hidden under the rails. Some of the shoulders on the rails don't fit super tightly against the legs. They also look done. Well, done enough to start putting glue on them.

Last night I ducked into the workshop for a few minutes and glued the side leg assemblies together. It was halfway through gluing up the first leg that I realized I'd meant to drill the holes for the long front rails before gluing the legs together. I figured if I was in for a dime I might as well go in for a dollar. I finished gluing up the first side and then glued up the second side.

I'm thinking that using my roller stand I can keep the legs level on the drill press table. I'll use a small bit to mark the location of the bolt holes by drilling from inside the mortise to the outside of the leg. I can then use that mark to drill the bolt head mortise and the 3/8 inch through hole.

I'm kind of hoping to get some time in the shop this week before the New Years weekend. One of my friends is having a weekend long virtual New Years party and I want to be able to spend some time visiting with friends. I'll still need to spend time in my shop over the weekend if I want the bench finished this week but every hour I spend ahead of the weekend gives me an hour to spend with friends.

Posted by Felix Enterprises at 6:55 PM