I finished the sharpening station so I can start a new project!

Yes, I know I started the picture frame project and haven't gotten back to it yet. It's because my frames sucked. They had huge gaps in the corners and didn't look good. They're going to be tossed and re-made. I think I might need to rebuild the jig I used which would be annoying to say the least. Anyway, that project is on hold. It'll be easier once I can make my hand tools sharp and have a bench to use them on.

Anyway, I think I've mentioned in previous posts that my winter project for this year is going to be a hand tool workbench. Why do I specify hand tool workbench and how is it differentiated from other types of workbenches? Can I use power tools on it? Am I going to build it with hand tools?

To answer the easy questions first: I can use power tools on it, I am going to use hand tools but mostly power tools to build it. The more involved question is what differentiates a hand tool workbench from any other kind? I am calling it a hand tool workbench to differentiate it from an electronics bench, a power tool bench, and a general purpose bench. It's going to be heavy enough to stay in place when using hand planes. It'll have dog holes so I can use stops and hold downs. It'll have a face vise and a deadman to help support long boards when edge planing.

Workbenches are actually very simple. They're a large(ish) flat surface held off the ground by some legs that are hopefully solid enough to keep the bench from wiggling when stressed. There are a ton of videos on YouTube on how to build a bench. Most of them are fine. Some are not. My bench is going to be in the model of a traditional European bench. Yes, I've heard of English Jointer's Benches...  I don't want one of those right now.

I have plans... Popular Woodworking $175 Workbench

I also have a book by the same author: Workbenches from Design and Theory to Construction and Use, Christopher Schwartz.

I bought the lumber for my bench from a local Home Depot back in the end of September. I'd pulled out my trailer for this trip. Unfortunately it took me weeks to get the trailer road worthy but that's a whole other story. 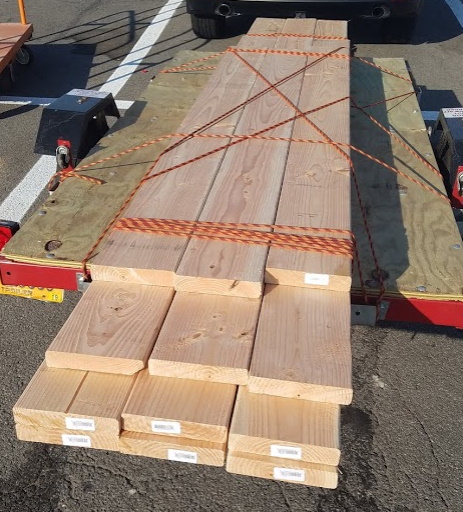 All 2x8's...  Most of them were 12 ft long; however, a couple were 16 ft long but those I cut in half using my cordless Makita circular saw. The 12 footers I extended over the tongue of the trailer as much as I could safely. The rest had to extend over the back.

When  I got them home I tried to select the best five or six out of the lot and cut them in half and carried them down to my workshop. In the process I think I tore something in my shoulder but now, a little over two months later it doesn't really hurt much anymore. They've been in my basement leaning up against a wall since then acclimating to my workshop humidity.

Yesterday I started milling those boards to be the top of my workbench. I started by ripping them in half until I ended up with a pile of 1 1/2" x 3 1/2" x 70" douglas fir boards.  I was about half way through the stack when I started thinking that maybe I should work on just half of them at a time. In Christopher Schwartz's article he recommends milling and gluing the board on the same day to reduce their chances of twisting, warping, and cupping as their internal stresses change after being cut.

I decided to rip the entire lot. I regretted that decision multiple times afterwards. After ripping the boards I then had to send them over the jointer to get them flat and square on at least one side. I flattened one face on all the boards, then using that face made the edge of the board flat and square to the one face. The next step was to pass all the boards through my planer to make the opposite face parallel to the jointed face, then passed them all through one more time to get the jointed face smooth.

If I'd done both jointer steps on each board I could have minimized the amount of stacking and unstacking. If I'd stopped after a half dozen or so boards I could have started gluing them into blocks. Regardless, I made a lot of saw dust. 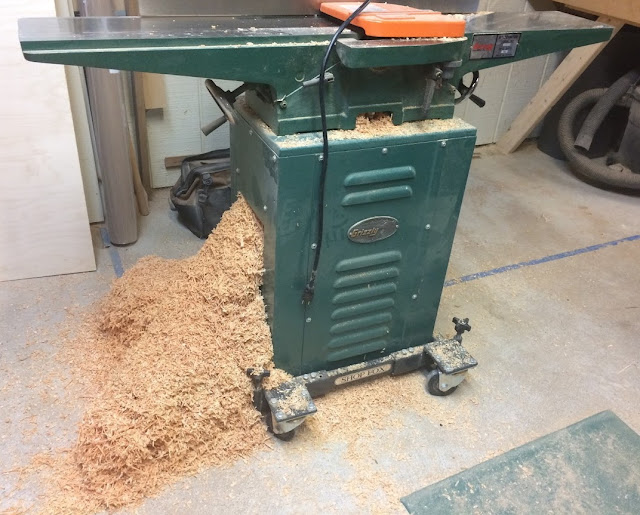 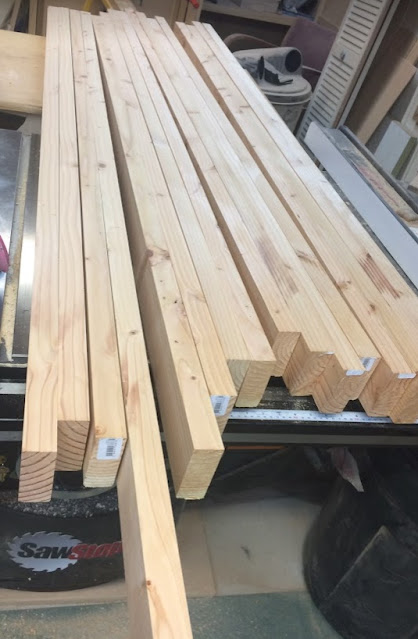 These smaller flatter boards get glued up four at a time into blocks. Before starting the glue up I sorted through the boards finding the ones with the clearest grain on the top. The bottoms are various levels of ugly but that's the bottom. That just has to be flat enough. 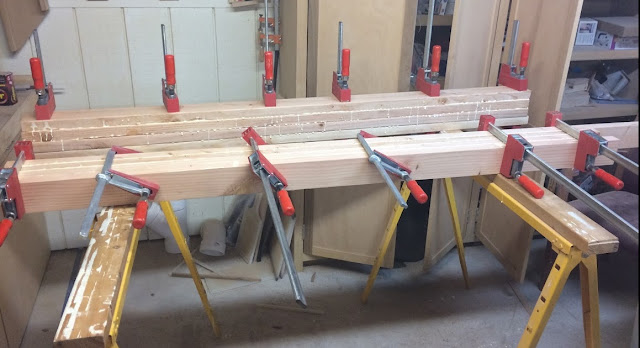 Yes, I used a lot of glue. I actually hadn't thought ahead well enough and didn't have enough in my shop. After gluing up the first block I had to make an emergency run out to my local store and bought a gallon of glue. With all the woodworking I do, one medium sized bottle each of Titebond I and Titebond III will normally hold me through a woodworking season. I'm guessing I used a quarter of a gallon getting all five blocks glued up.

I got all five blocks glued up Saturday afternoon and evening. Yes it did drip all over my floor and make a mess. No, it wasn't too bad to cleanup. I just used a paint scraper today and popped all the drops off the concrete then swept them up and threw them away.

I regretted deciding to do them in sets of four. The glue was quite slippery and made it difficult to get enough clamping pressure to keep the tops of the middle board aligned. I ended up giving up and just let them line up how they wanted. I think if I am ever to do this again in the future I'll glue them up in pairs, then glue the pairs together. It would triple the  number of clamp-ups I would need to do; however, it would be a lot less stressful and probably better quality. I'd just want to start earlier in the day so I would have time for the additional glue-ups to dry.

Today I used a paint scraper to get as much of the glue off the block as was convenient. I didn't go to town with the scraper but I did try to get the biggest chunks off before working them with better tools. Once the blocks were kind of clean I passed the side that's going to be the bench surface over the planer. After all of them were flat I trued up the fence on the jointer and passed them all over the jointer until one of the sides was flat and perpendicular to the top.

All this jointing created as much sawdust as the original cleanup of the faces and edges. Oh so much sawdust. I noticed at the end of the day Saturday that the bags on my dust collector were getting full. Today I took twenty minutes or so and swapped the bags. I don't remember when the last time I did this was but I do remember drilling holes in the bottom of my garbage cans to let air in while pulling out a full bar. This worked perfectly. Getting the bags out of the cans was easy and combined with catching that the bags needed to be changed before they overflowed made the job not fun but also not a huge chore.

Getting back to the woodworking, after getting two sides off the block flat and perpendicular I swapped tools and switched to my planer and made the opposite face of my block parallel to the jointed face. This was actually quite difficult. The blocks are manageable by one person (me) but are awkward to get into the jointer. The weight makes it hard to get a feel for how they are feeding into the planer. Regardless I got through them. 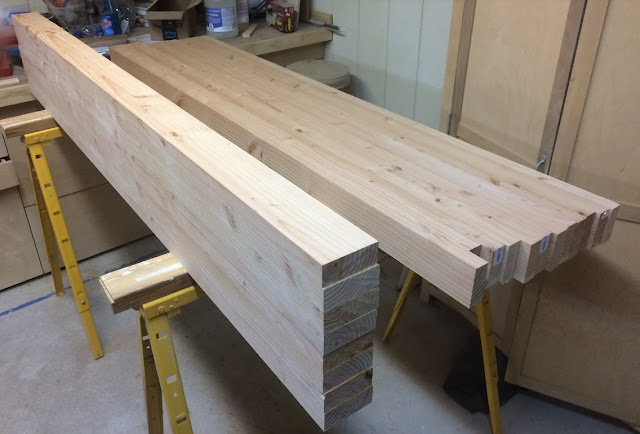 The above picture is actually five separate glued up blocks. Three of them got shoved to the back of the sawhorses to get them out of the way, two of them are stacked. Since the bottoms are uneven and the thicknesses are not consistent anyway, I think I'll be able to get a better glue up if I do it this way rather than flat.

It's already starting to look like a bench though!

Over all my glue-ups came out okay. Not perfect but okay. I had a couple of spots where there were gaps. I think if I had glued the boards in pairs and then glued the pairs I probably would have avoided them. Makes me a little sad but this is my first bench. I figure there will be others and I'll do them better. 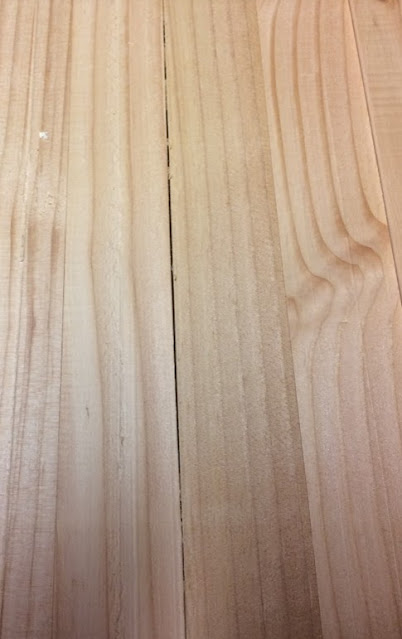 This is one example. I think there is one other gap in the middle of the glue up and then another glue up that has split ends. I'll probably leave them alone. If they ever start bothering me down the road I'll mix up some epoxy and fill them in.

This is pretty much where I left the project today. I'm ready for the next glue up but the cleanup step after that is to pass the double block through my planer. I'm a bit nervous about that though. The single blocks were awkward enough to do on my own that I am afraid the double blocks will be unmanageable. I'm considering trying to build an extended infeed table so I don't have to lift all the weight while also trying to feed it into the planer.

I'm going to give it a day of thought and see where I am tomorrow evening.

Oh, I almost forgot! My foresight to add a cover to my miter saw dust collection chute proved worth the effort today. 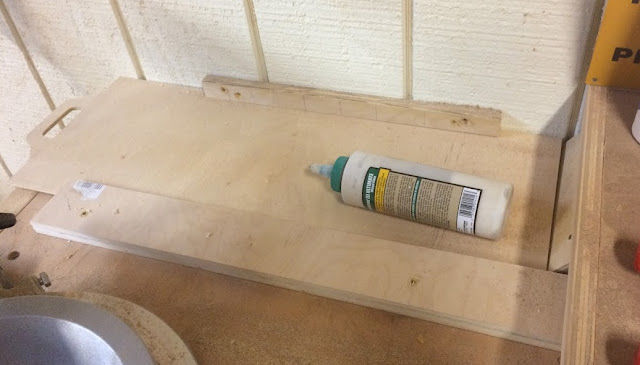 Without the cover that bottle of glue would be gone. It's only a bottle of glue but it could have been a more expensive tool too. Definitely going to keep that shut unless I am cutting things on the miter saw.

Note: This blog post contains links to products on Amazon. This is not an affiliate link. I do not gain any benefit from you using it. I've not received compensation of any kind for this link or my mentioning the book.

Posted by Felix Enterprises at 6:37 PM