I was all excited about making even more progress on my workbench this weekend. In my head, it was pretty much already done. I thought through all the preparatory steps, decided how I wanted to build and attach the legs, What kind of vise I was going to put on it. It was all perfect. Then I remembered I needed to pull the wood in from the garage where I was storing it...  Right... Then I need to let it sit in the workshop for a week or two until it is acclimated to my shop humidity.

So, I finished my planning, picked out the boards I am going to use for the legs then moved them from my garage to my basement. They're sitting in my basement "acclimating".

Other than that I spent some time yesterday cleaning up my shop. I swept the dust from under where my outfeed table normally goes, put the outfeed table back on the outfeed side of my table saw, put tools away and generally tidied up the shop.

I leveled the sawhorses my new workbench top is sitting on, and thankfully that removed all the "rock" from the top. I used my 4 ft level to check the top for flatness and fortunately it is more or less flat. unfortunately it is a little dished out. There's a low spot in the middle which spells a lot of flattening for me in my future. I took a couple test passes with my bench plane and it worked sort of okay. I did get some tear out so I think what I need to do is use my new sharpening station to get that plane blade scary sharp.

That summed up my day yesterday. I should have done more but I didn't. What I really wanted to be doing was working on my workbench legs; however, I couldn't because the wood wasn't ready.

Today I remembered that my other weekend project was going to be building a laptop stand.

My day job is being a software engineer. This gives the benefit in these days of Covid-19 to be able to work from home. I've been making small improvements to my workspace which is a desk on the side of our guest bedroom. A few months ago I switched from using my laptop keyboard to a USB keyboard. Then I switched my primary working monitor from the laptop to a second monitor. Then I got a third.

My digital desktop is now in good shape but unfortunately my physical desk space is now quite crowded. The laptop doesn't help because it's a normal laptop as opposed to one of those fancy tablet laptops. I cannot "fold" it up to hide the keyboard so it takes up additional desk space that is "wasted". The other problem is that it is lower than my two monitors so when shifting between displays I have to look up, then down, then back up again.

This doesn't seem like it would be that big of a deal; however, it's that extra step you have to take between two woodworking machines you use all the time. That little extra bit of effort adds up over time and since I am working 40+ hours a week in this space I should try to make things more efficient.

So I came up with a plan. If I lifted my laptop on a stand my monitors would all be on the same level and I could use the space underneath for storing my pads of paper, pens, and other miscellaneous office supplies. I even came up with a project vision. 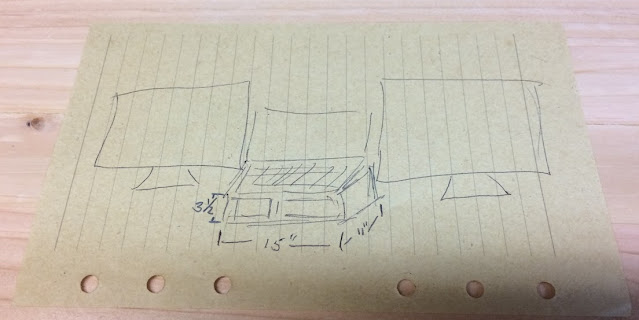 Okay, so it isn't a super precise engineered drawing but a lot of my projects start this way. A rough sketch with some rough dimensions. The rough dimensions allow me to get an idea of how feasible the project will be. Gives me something to looks at when I am noodling around construction decisions. My next step is to start making more detailed sketches. 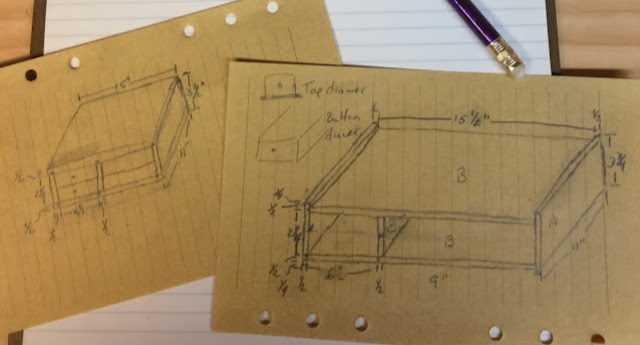 The one on the left was my first one. It was while making that one that I thought about what I would want to put in the drawers and realized that I had just not quite enough space to put my small note pads on the left and a large 8.5x11 pad on the right. The sketch on the right hand side is my second and final drawing. I changed how I was going to join the pieces. In the first one the sides were trapped between the top and bottom pieces. In the second one the construction is a little more traditional and I have the top and bottom slotted into dados in the sides.

When I headed into the shop today I briefly considered making it as Adam Savage would. He'd but joint everything with some wood glue and then pin nail it together. It would be a little quicker than my normal techniques and probably plenty string enough. But! I am a woodworker and making good joints doesn't take that much longer than slapping something together. Now, I am not trying to say Adam Savage is not a talented fabricator because he is. However, he is also a product of his background where there is not value placed on making projects "furniture" quality. Props need to look good enough to look good on screen and last long enough for the filming to complete.

So I calculated my parts sizes accounting for tongue and groove joinery.

The rectangle on the bottom was representing a piece of 1/2 inch baltic birch I'd found to make the stand out of. I drew it out so I could think about how I'd take my pieces out of it to minimize waste and hopefully leave me the most useful piece of left over plywood possible. (I ended up cutting an 11 inch wide piece 60 inches long. That leaves me a 2ft x 5ft piece of plywood left and gave me a smaller piece of scrap.

I took that piece and cut it down into my parts. 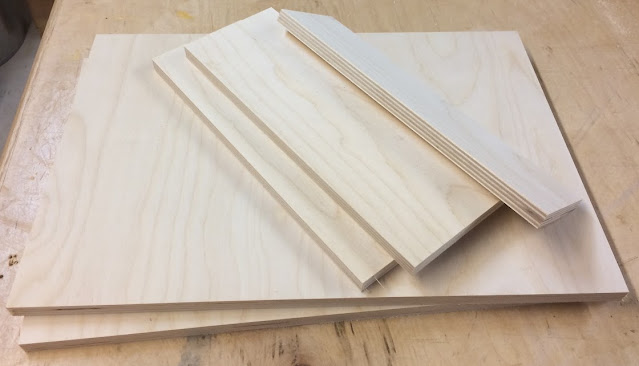 Then it was installing a 1/4 inch dado stack in the table saw and cutting all my grooves. 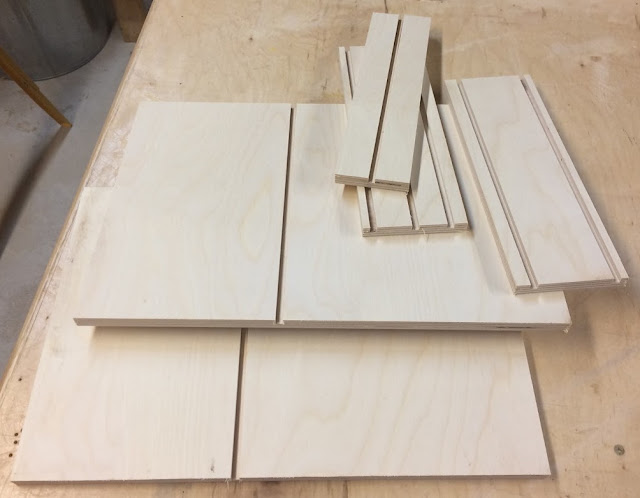 Then I added a sacrificial fence and cut all the rabbets / tongues. Unfortunately I didn't get a picture of that separate but I do have one of the dry-fit case. 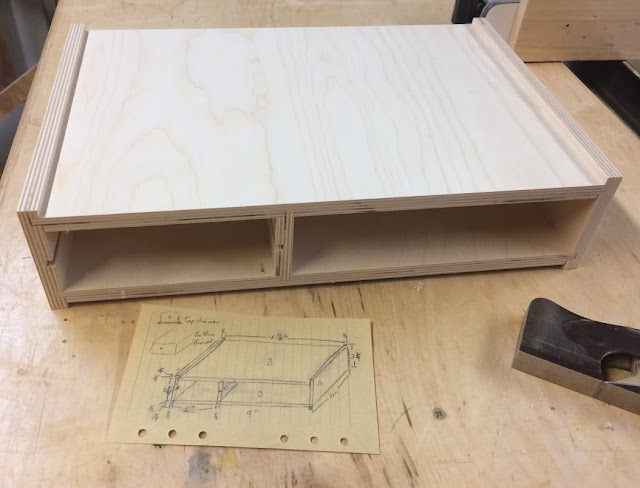 That's my shoulder plane photo bombing on the right hand side. A couple of the joints were just a touch too tight so I used the shoulder plane to shave down the tongue until it fit snuggly in the grooves. Once the dry fit looked good I glued and clamped it. 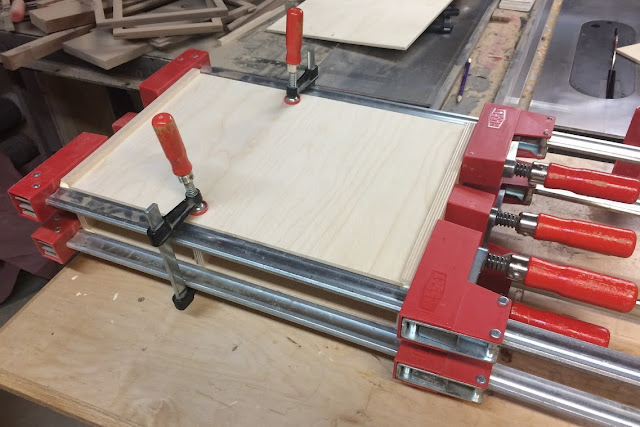 Yeah, that might seem like an excessive number of clamps; but, I have them...  may as well use them. While the glue on the case was drying I made a couple of drawers for the left side.

I found a math error too...  Math is hard... When I was splitting the height on the left hand side I split it in half. What I forgot to account for was that the bottom drawer loses the thickness of the drawer bottom vs the top drawer which did not. That means that my lower drawer is about 3/4 inch deep and the upper is about an inch. They'll still hold things.

After making sure the drawers fit, I added a stop block to keep the drawers from sliding out the back. It was a scrap piece of white oak I had left over from my weapon mounts I made in the spring. I thought it was going to be perfect but I need to come back and shave 1/16 inch off of one side so the drawers can shit completely. Maybe I'll do that later. I also softened all the sharp edges by rounding them over with a sanding block and some 120 grit sandpaper.

The drawers are made from 1/4 inch baltic birch plywood. I glued them together using CA glue and an accelerator spray. The top drawer is held in place by extending the drawer bottom into grooves in the sides. The drawer pulls were parts I had in my stash. I'd gotten them for some earlier project and then decided to not use them. I'd thought they had a normal machine screw but they actually had a tiny hanger bolt but not tiny enough. It would have stuck through the front of the drawer. So, I roughened up the back and super glued them to the front of the drawer. If they come off I'll try something else.

This is probably a good time to talk about my new favorite glue. In a lot of the YouTube videos I watch the builders will use CA glue for jigs and things they need to finish quickly. Michael Alm uses CA glue in the same joint as wood glue using the CA glue to clamp the pieces together until the wood glue dries. I got some CA glue and some accelerator to try it out. I've used it a couple of times already to make jigs and on the dust chute behind the new sliding miter saw. Making these drawers was probably my largest use to date. I think it's going to be plenty strong and my drawers were done in minutes without needing to figure out how to fasten clamps to the fiddly pieces.

I had the stand in place briefly but it was the first time I'd spent time around it without my dust mask on and I could smell the CA accelerant. I didn't want to stink up our living space so I took it back into my shop. Hopefully it will blow off by tomorrow and I can bring it back up and start using it. I'll try to remember to get pictures of it in place.

Posted by Felix Enterprises at 6:41 PM