I relaxed and thought about a couple of other home improvement projects. One of the things I am finding is that being trapped in my house, little things I've been living with for years are finally getting on my nerves enough that I feel like I need to fix them. I didn't do much of anything in the shop on Saturday. I did however do a bunch of shop thinking...  Basically, thinking about projects and making plans. Thinking about how quick and fast the work will go once I get up and go do it... I'll go into those sometime later as it is now Monday evening and I am still thinking about some of them.

Sunday I fixed the kitchen door that leads to our garage. The door handle latch has been sticking for months, maybe years at this point. It wasn't sticking that bad but every now and then it would stick in the "open" position and the door would swing open sometime after we'd walked away. Not the best when you've got cats who are willing to go explore the garage and beyond. Anyway, I just took the handle apart, sprayed a liberal amount of WD40 inside and on the latch. Seems to be working. While I had  screwdriver next to the door I tightened the screws in the deadbolt.

I've been mulling over what I want to do for my workbench legs and for the vise.

The first semi-critical decision is what kind of vise to I want on the table. This is a decision that can be changed later but I figure it will save me headache if I design the table to accept the vise I intend to put on it. My main two choices were a face vise or a leg vise. Sure, there are other types of vises: wagon vise, tail vise, shoulder vise, crochet, etc.

I don't need a shoulder vise as those are specialized vises. I don't think I want or need a tail vise. Sure, one might come in handy now and then but I am pretty sure I can substitute hold downs and other solutions in lieu of a tail vise. Wagon vises look cool but I don't think I need something that complicated on my first bench. A crochet looks really cool and is a very tempting option. It would certainly work if I thought my primary use case was going to be edge planing long boards but I'm thinking it is as likely that I'm going to have more use cases for clamping than edge planing.

So, face vise vs leg vise. The plans I am using recommend a $75 Veritas face vise. Unfortunately that vise has risen to $110 since the article was written. There is a Yost brand face vise on Amazon for $80, or a Yost brand leg vise screw for $50. I'm not a penny pincher but I am frugal. I'm willing to spend more money for quality tools when I think the difference will be significant; however, I try to buy the least inexpensive tool that will do the job. The Yost brand vises have very good reviews, I think they'll do. I ordered the leg vise this morning, hopefully to be here in a couple of days.

With the type of vise sorted out I need to make sure it'll work with my bench. The plans call for legs that are 2-3/4 inch square. The Yost screw requires a 1-1/4 inch hole. I don't really want to take that much wood out of the leg. It'd probably be fine but I'd rather not take the chance. What I am going to do is make the top part of that leg a little wider to accommodate the vise screw. I tossed around a couple of ways to describe the wide bit at the top of the legs: hips, thighs...  None of them sounded right. Then my wife called them jodhpurs and that description fits.

The last detail is how to fasten the legs to the benchtop. The plans call for attaching a cleat to the top of the legs and screwing through that into the top. That'll work to hold the legs to the top but not particularly add any strength. Many of the YouTube bench builders will mortise their legs into the benchtop. This looks super strong. I think I am going to go with the cleat screwed to the top. It's simple and quick. If it ends up not providing enough strength I can always rebuild the legs and mortise the new ones into the top.

The basic legs got glued up individually but I figured I could nest the two jodhpur legs together on one wider blank.

I'd make a joke about not having enough clamps but clearly I do have enough.

After letting the legs dry up for an hour or so I took the clamps off and cleaned up the worst of the glue drips and spills. I'd really hoped to be able to square them up but the glue was still sticky enough that I was afraid I'd make a mess of my power tools. The downside of being able to do multiple large glue ups is that when it is all done you need to put the clamps away. 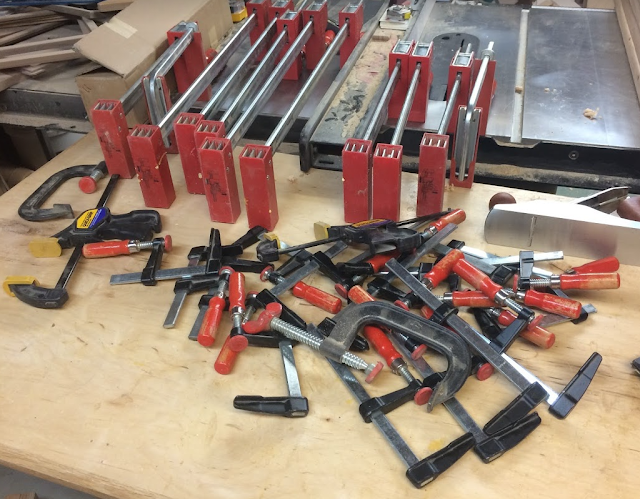 The last thing I took care of was to create a template for the jodhpur legs out of some 1/4" masonite I had lying around.

Today I cleaned up my leg blanks by running them over the jointer to clean up one of the glued edges then over the table saw to get the other edge clean. The square legs got ripped down to size. The jodhpur legs got marked out, then I cut as much of the legs as I could using my table saw, then finished the cuts on my band saw.

I didn't get a picture of the leg blank with the jodhpur legs all laid out but you can probably imagine how I nested them from this picture.

That's all 4 legs. The square ones on top and the jodhpur ones on the bottom. That's pretty much the orientation they were in when I cut them out.

After getting them trimmed and sanded I switched to working on the rails. I usually do mortises first; however, the plans call for cutting the tenons first then using them to lay out the mortises. So I trimmed all my rails to length using my spiffy new sliding miter saw. It did a spectacular job.  I did use a stop block taped to my workbench for the side rails. The long front/back rails I just marked, checked to make sure they were the same length, then trimmed the one that was slightly longer.

The last step to prepare the rails was cutting tenons which I did on my table saw with a dado stack. The shorter side pieces worked out fine. The longer pieces were more of a challenge. I probably need to wax my table saw top. I should have put a better extension on my miter gauge. Regardless it all worked out in the end.

Unfortunately I didn't think about the dog holes in the top before cutting the long rails to length. I need to go back and do some math to make sure the rail length isn't going to force me to cover a dog hole (well, I'd recut the rails to make sure that doesn't happen). This is only possibly an issue because I deviated from the plans when it comes to my face vise. The plans call for a cast iron face vise which includes a wide overhang on the left side of the bench to accommodate it. With a leg vise I should be able to move the legs closer to the ends so I lengthened the front and back rail to widen the stance of the bench. Unfortunately I didn't think about the dog holes when I trimmed the long rails.

No worries. I can always cut them shorter and it will just work out.

I had really hoped to get the workbench finished over this last weekend. Unfortunately, again my vision of how quickly I would breeze through the work didn't match reality. It's a good thing I don't have to do woodworking for a living. Anyway, I have hopes I can get it finished this coming long weekend and maybe even get one or more side projects finished.

Posted by Felix Enterprises at 3:28 PM