Tonight I took a little time in the workshop. Right before dinner I ran down and glued up two more of the small blocks into one large block. After dinner and some TV I went down and cleaned the glue squeeze out off it. I was disappointed. I did better on the first one. The second small block glue up had a lot more squeeze out and I didn't perfectly align the two blocks. One side lined up quite nice, the other was off by about 3/32 of an inch. Not horrible but I was hoping for better. I'm going to have to do better when I glue up the three pieces into a full top.

While waiting for that glue up to dry I decided to build my temporary Planer stand.

This was a quick and dirty build. I took some rough measurements and decided that a 24 x 24 inch top about 32 1/2 inch tall stand would work out. My scrap 2x4 happened to be 32 inches long so I left them as is for the legs. I cut a couple of other pieces of scrap and stretched them across the top using some 2 1/2" wood screws to fasten the rail to the top of the legs. After making two leg pairs I tied them together with some more 2x4 scrap.

I threw a lot of screws into it but as probably everybody reading this is thinking, it was a little wobbly. As it would cost me around $600 to replace my planer I really didn't want to trust it to the new stand yet. I grabbed a piece of pine construction grade plywood and ripped it into four 2" wide strips. I screwed these at an angle across each pair of legs. I found a piece of MDF that was not quite large enough to cover the entire stand but was big enough to hold up the planer. I screwed that to the top of the stand with some 1 5/8 inch deck screws. 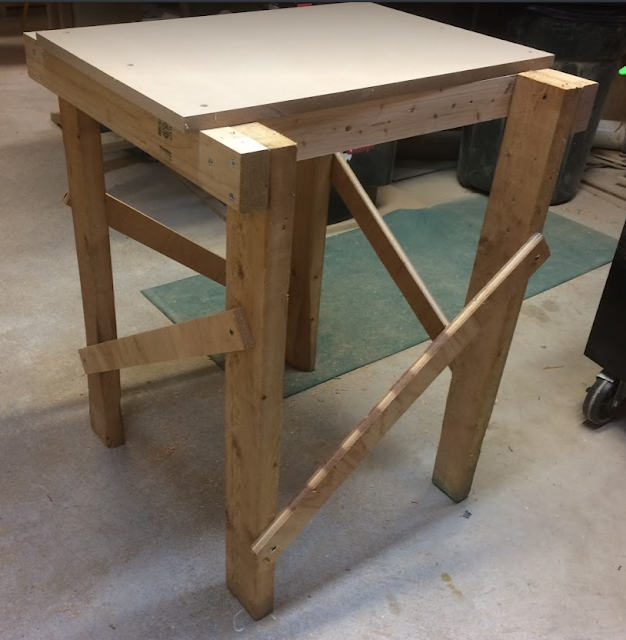 After adding the gussets and the top the stand was super solid. I don't think I'd get on top and dance on it but I did lay my weight across the top and it didn't wiggle. Good enough to hold up my planer anyway.

The temporary stand lowers the planer so that I can use my table saw outfeed table as a staging area / infeed table. The out feed would be my table saw but my shop floor is so uneven that the table saw is about an inch short and the infeed table is just perfect. 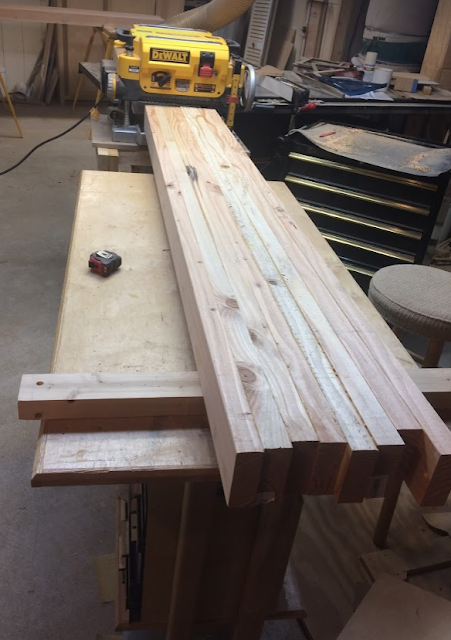 I ran my first large block through as a proof of concept. I can only take very small bites but it does work. I thought I needed the back of the large block levered up; however, I actually needed to remove it for the block to be at the right orientation to go through the planer.

Next time I get into my shop I need to plane the bottoms of the two large blocks and my final small block then a cleanup pass across the tops, then they all get glued up into one large top.

I did try to use my new sliding miter saw to create half laps of the 2x4s. It didn't work as well as I wanted. I think there must be another adjustment I need to make in the saw. Or maybe I need to offset the work from the fence. Anyway, the blade didn't cut all the way to the back of the 2x4 leaving a curved ramp in the back. Since I don't have infeed support on the left of the blade it was also feeling very awkward and unsafe. I ended up just cutting off that test piece and face screwed all the pieces.

Posted by Felix Enterprises at 7:20 PM