Yesterday I had my day job to do, dinner to prepare for my wife, and then I spent the evening playing Mass Effect 3 with some friends of mine. Yes, I know the game was release almost 10 years ago; however, I still like it. I like that the multiplayer is cooperative. The playstyle also is one I like. Most of all, I got pretty good at the game. I can - have in the past - completed the hardest level of multi-player by myself without help.

Anyhoo, all that meant no woodworking yesterday. Today I didn't have to work my day job so after sitting around all morning and making lunch for my wife I headed into the basement. 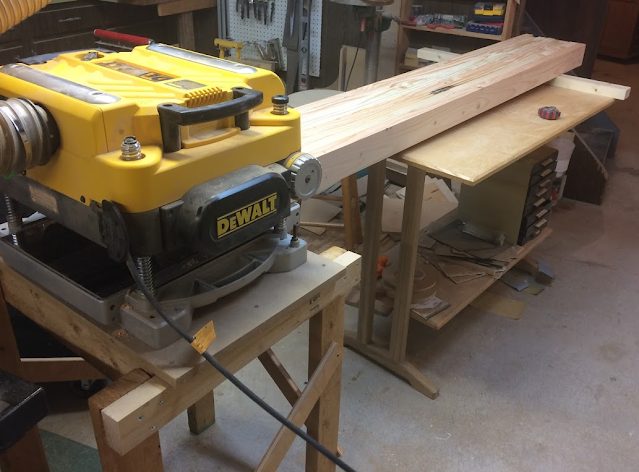 I'd tested my infeed on Wednesday but today I actually put it to use. It worked out spectacular. The blocks didn't need any additional support on the infeed. I was able to get each block started by setting it on the infeed table and in the mouth of the planer, shove it halfway through the planer then run around to the other side to pull it through.

The planer was able to keep the blocks moving while they were in the middle third but in the first third, needed some help pushing them in and on the outfeed, there was no support so I had to lift and pull to keep them tipping the planer and keep them moving. I was able to take about 1/16 inch on each pass. It only took three or four passed to get each block flattened.

After getting all the blocks flattened and thicknessed I started gluing them up. I test fit the three pieces to figure out which edges were the best match. I got one good match and one adequate match. I considered trying to pass the adequate and/or poor matches through my jointer again but decided the joints weren't going to turn out any worse than the ones I already had. 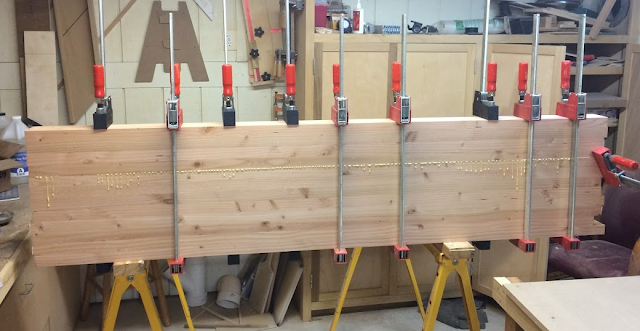 The above picture looks like it is missing a clamp on the left hand side on the end. I had one there. I just removed it before I thought to take the picture.

I gave the glue 20 or 25 minutes to dry then removed the clamps, scraped the glue, then repeated the process with the last large block. I did need to upgrade to all larger clamps.

I then had to take a break to rake leaves.

I have a maple tree in my back yard that doesn't even start dropping its leaves until mid November and doesn't finish until early December. Normally I don't get a chance to take care of these leaves until spring by which time they've killed parts of my lawn. I had a beautiful day today and I didn't have to work so I took advantage of the weather to clean up the leaves before the whole lawn killing part.

That took a few hours but afterward in the few extra minutes I had between ordering our dinner from a local Thai restaurant and picking it up I removed the clamps from the workbench top.

It's looking pretty okay. I'm thinking/hoping that gap on the left is just my uneven shop floor. If not, I have a lot of hand planing and flattening in my future.
I'm glad I'm making my first workbench out of douglas  fir. Hardwood would probably have cost me $1000 vs the $250 the fir cost. Most of the issues I've come across so far are related to joints not gluing up perfectly. The majority of those are me trying to glue too many pieces at once. The others are me not getting my edges perfectly flat on the jointer...  probably...

The problem with these really large blocks of wood is that they are heavy and I have the physique of a typical software engineer. The blocks are heavy enough that they are difficult to manage on the jointer and get a clean edge. I think on my next workbench I'll make sure to get a friend to help me.

I've got some planning to do. I looked at the face vise specified in the plans and it's increased in cost from $75 to $110. In the big scheme of things, that's not too expensive for a wood working tool; however, I've been wanting to make a leg vise. I was thinking of getting started with the face vise and then maybe upgrading to the leg vise later but now I am thinking I might just go straight to the leg vise.

I was already planning on widening the legs on the table. The plans call for the legs to not come all the way to the edge of the worktop. This won't work if I am ever to add a leg vise. The other problem is that the plans call for 2-3/8 inch legs. Unfortunately the Yost leg screw will require a 1 1/4 inch hold which will take more than half the width of the leg. I need to decide if I want to beef up all the legs, just one leg, or perhaps come up with some other way to fasten the vise to the table. If I was making an English Jointer's bench like Rex Kruger's I could just fasten it through the apron.

Anyway, that was all my progress for today. I got my top glued up. Hopefully more tomorrow.

Posted by Felix Enterprises at 7:01 AM